Japan-Weekly Strategy Report Now Is the Time to Gauge the Potential of Japanese Companies August 6, 2019 411 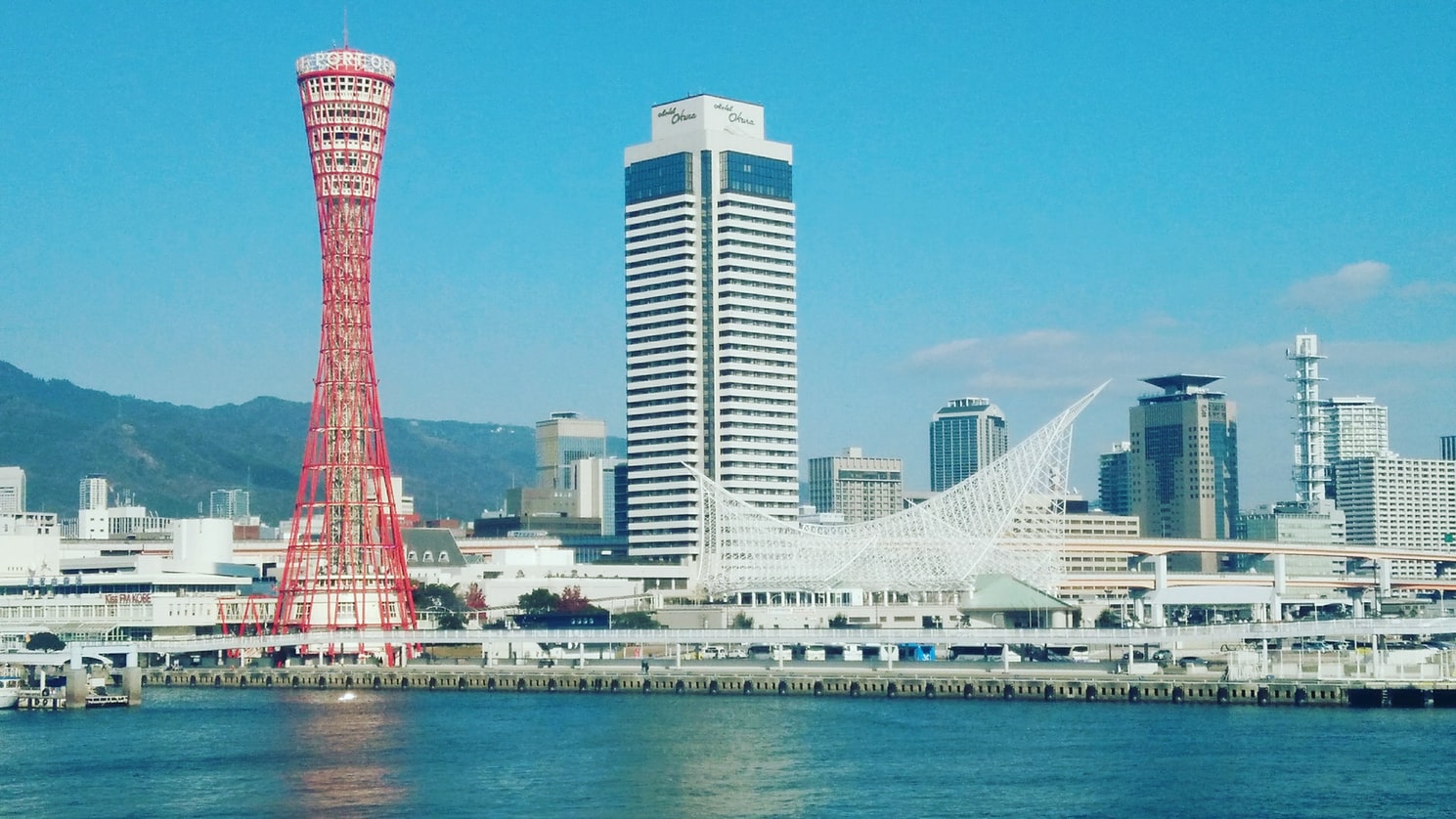 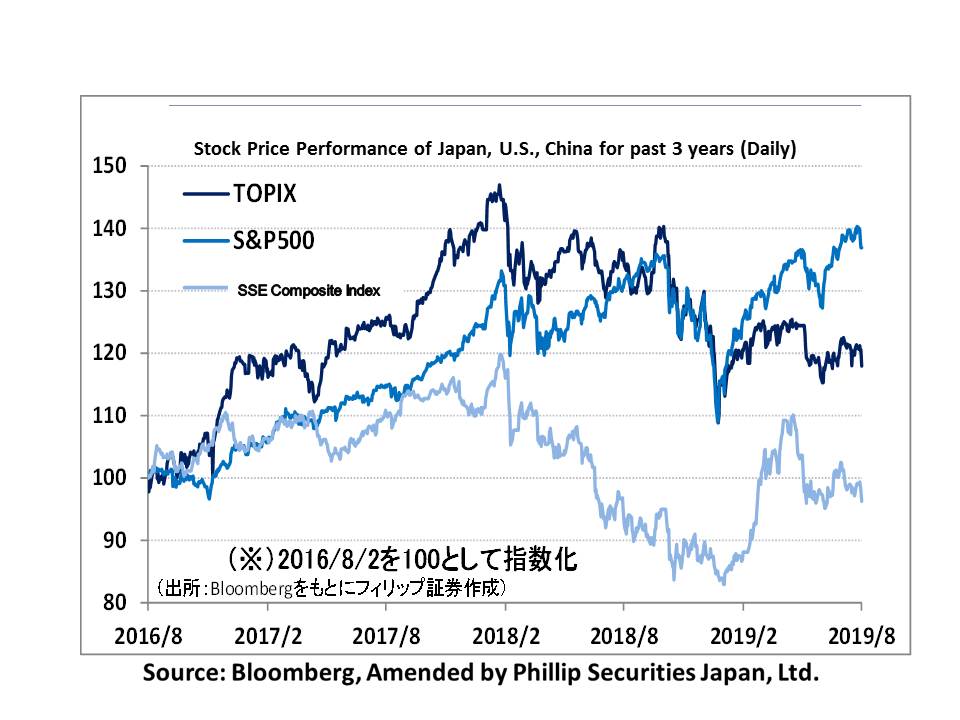 Now Is the Time to Gauge the Potential of Japanese Companies

The Japanese stock market from 29/7 began with movements following the financial policies of the US and Japan central banks. On 25/7, the European Central Bank had already indicated a possibility of conducting policy interest rate cuts by the first half of 2020, which led to growing expectations of additional monetary easing at the Bank of Japan and interest rate cuts at the US FRB. However, the Bank of Japan’s Monetary Policy Meeting remained at the status quo, and despite the decision of the interest rate cut of 0.25% points by the US FOMC, as it “did not prove to be the beginning of a series of long-term interest rate cuts”, it failed to meet market expectations. Despite the NY Dow falling significantly on 31/7 by 333 points compared to the previous day, due to receding expectations of the US FRB interest rate cuts, on one hand, it helped to support Japanese stocks due to the depreciation of the yen against the dollar, and on 1/8, the Nikkei average stood firm by increasing by 19 points compared to the previous day.

Whereas on 1/8, US President Trump announced on twitter the implementation of the 4th round of tariffs against China (10% per 300 billion dollars). In response, the NY Dow saw a consecutive significant fall of 280 points compared to the previous day. With the dollar-yen exchange rate abruptly turning towards the direction of the yen appreciating against the dollar by falling below 107 points from the high price of 109.30 points the previous day, on 2/8, the Nikkei average saw a significant fall to below 21,000 points. With the Apr-Jun term financial results announcements moving into full force, purchasing movements focusing on buybacks were observed due to financial results announcements for major stocks faring better than market expectations, however, this was more or less negated from risks of the US-China trade friction suddenly becoming apparent. The US-China trade friction is not an issue that will be agreed upon easily, and it seems that we have all been reminded that this will be a factor that will weigh heavily on the global economic structure in the future as well.

In the midst of growing uncertainty of our future footing, in this data-driven economy with data being coined as the “Oil of the 21st Century”, the future of Japanese companies, in particular those in the manufacturing industry, is far from grim. Japanese companies, despite possessing advanced technology, are often regarded as the textbook example of a “conglomerate discount”, where they take on various businesses and are unable to effectively utilise their assets or shareholders’ capital. However, in this 5G communication era where “ultra-high speed and ultra-low delay” data come and go, through IoT (Internet of Things) technology, the tie-up of data with various machines / equipment hides immense potential in its metamorphosis into “automated manufacturing platforms” via advanced 3D printing technology. Specifically, we can look forward to corporate groups with systems subsidiaries versed in software technology to become promising targets of investment by showcasing their strengths from effecting a corporate governance reform or business reorganisation. 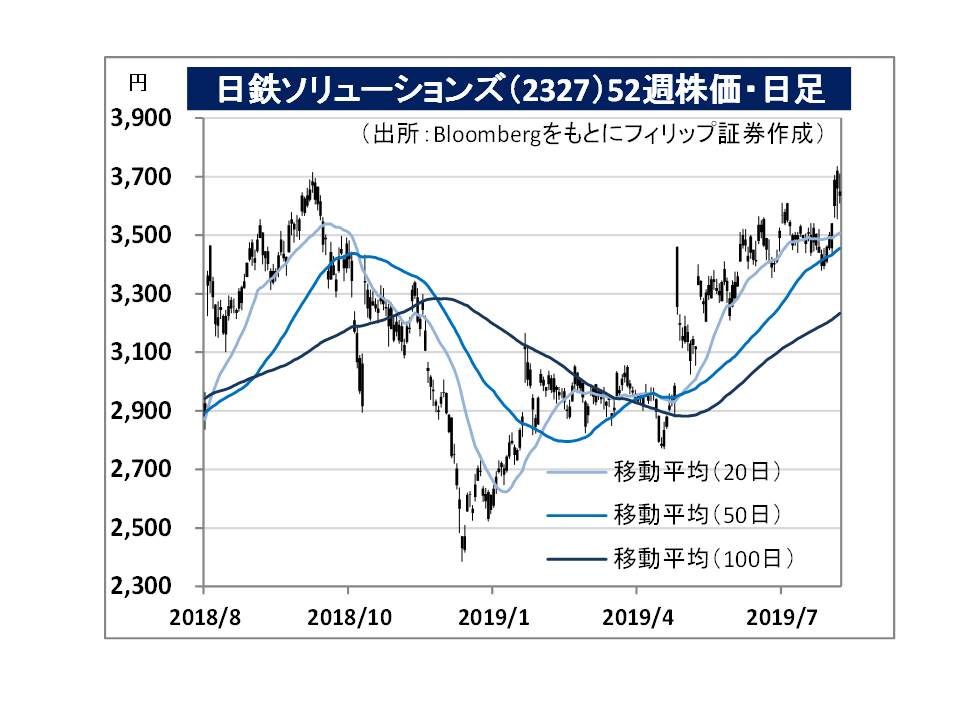 ・For 1Q (Apr-Jun) results of FY2020/3 announced on 30/7, net sales increased by 39.8% to 81.664 billion yen compared to the same period the previous year, and operating income increased by 55.1% to 7.936 billion yen. The increase in the number of major product projects for central government agencies, the contribution from major foundation projects involving industrial / distribution / services, and the increase in service solutions for Nippon Steel, etc. have been the driving force for their business performance.

・For FY2020/3 plan, net sales is expected to increase by 7.8% to 286 billion yen compared to the previous year, and operating income to increase by 5.9% to 27.2 billion yen. In the 5G IoT generation which conducts large volumes of data transaction at real-time between things, as a core company supporting Nippon Steel group’s data distribution, we can foresee an increase in the importance of the company’s role. Attention will likely be focused on business reorganisation due to an increase in the corporate group’s ROE and a corporate governance reform involving parent-subsidiary listing. 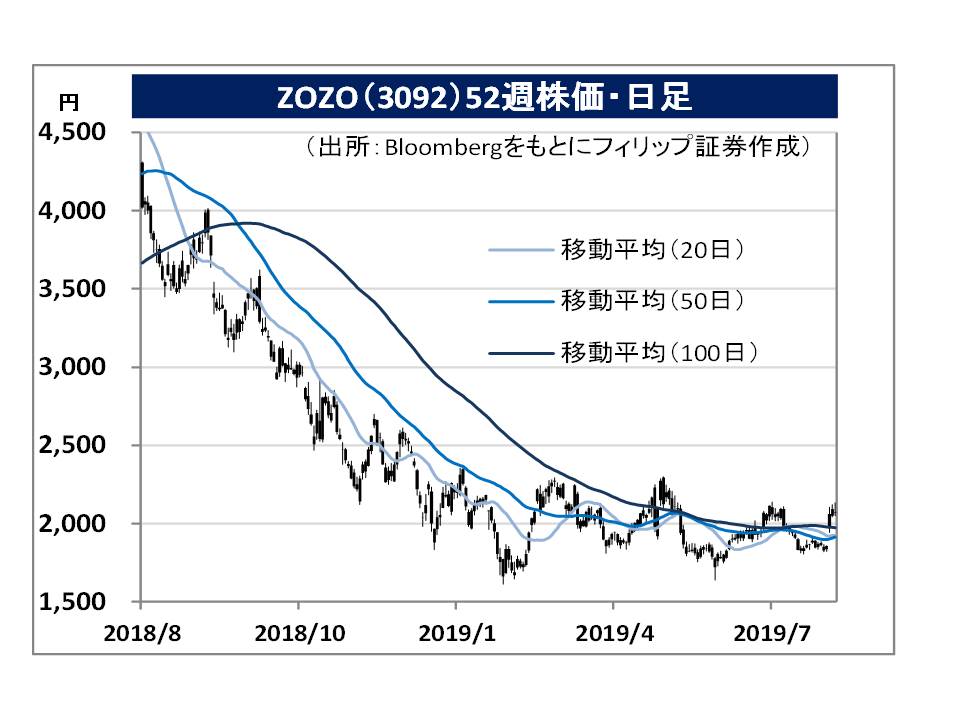 ・Established in 1998. Expands 2 main businesses which are the ZOZOTOWN business that operates the e-commerce (EC) site, ZOZOTOWN, and the BtoB business, which supports operations of the EC site. Also operates the fashion media, WEAR, which aims to contribute in revitalising the overall fashion market. ZOZOTOWN expands (as of 3/2019) 1,240 shops (excluding PB shops).