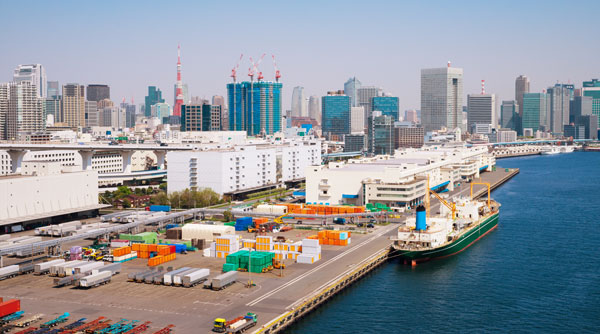 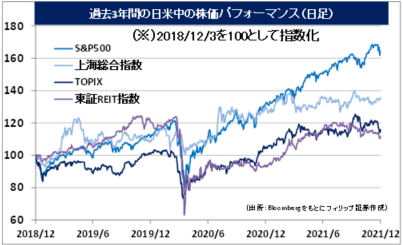 The new COVID-19 variant (Omicron) detected in South Africa was reported in Japan on 26/11, which cast suspicion on immune escape that evades existing vaccines due to it having greater transmissibility than the Delta variant and having many mutations. There has been an increase in price fluctuation in major financial markets, such as the U.S. and Japan stock markets and the WTI Crude Oil futures market, which were flung up and down as it went from rejoicing to worrying over information on Omicron.

While the “short selling ratio” tabulated by JPX shifted generally in the first half of the 40% level from the start of the month to the 25th, after rising sharply to 51.5% on the 26th, it then also shifted to a high level in the range of 46.6-47.8% from the 29th to 2/12. The “up-down ratio”, which is the index that monitors a sense of overheating based on the ratio of the number of stocks with a price drop and the number of stocks with a price rise in the market, also shifted to under 80% from 24/11 onwards and reached under 70% on 2/12, which is said to be the rock-bottom zone which has oversold. Also, in the Japanese stock market on the 3rd, stock prices rebounded via buybacks focusing on land transport sector (54.9%) and air transport sector (56.5%) stocks, which had high short selling ratio levels on the 2nd.

If the governments of each country are to decide on implementing movement restriction devices one after another as prevention or measures against the spread of the Omicron variant, we can imagine that there will be an increase in skyrocketing container freight rates in maritime transportation. Also, since there has been stagnant container loading and unloading at harbours due to reinforcements in each country’s epidemic control system,  we can also expect a rise in storage demand in freight warehouses. In that sense, we can likely say that key stocks among warehouse stocks and maritime transportation stocks, which have been shifting in a steady rising trend up to around September this year, would be those that are able to have relatively good business performance forecast under the uncertain circumstances due to fears of Omicron infection. For warehouse stocks, there ought to be considerations on the possibility of a broadening of industry reorganisation led by maritime transportation companies that are aiming for business diversification, such as Daibiru (8806) and Utoc (9358) becoming wholly-owned subsidiaries via a TOB from Mitsui O.S.K. Lines (9104).

Regarding economic downturn concerns following movement restrictions by governments, beginning with the large-scale infrastructure investment plan that has already been passed and signed in the U.S., there is a high possibility that there will be advancement in the implementation of infrastructure investments worldwide focusing on the renewal of lifestyle-related infrastructure that has severely deteriorated. In that sense, there will likely be focus on iron and steel stocks. Nippon Steel (5401) and JFE Holdings (5411) have raised a policy of a consolidated payout ratio of 30%. For Nippon Steel, their full year forecast EPS (earnings per share) is 565 yen and their actual results interim dividend is 70 yen. For JFE, their full year forecast EPS is 434 yen and their actual results interim dividend is 60 yen. There will likely be greater expectations of a dividend increase in both companies. Since there are expectations of a reduction in crude steel production in Chinese enterprises following China’s policy on “phasing out coal”, the unlikely occurrence of a price collapse in iron and steel due to low cost exports will also likely be beneficial. 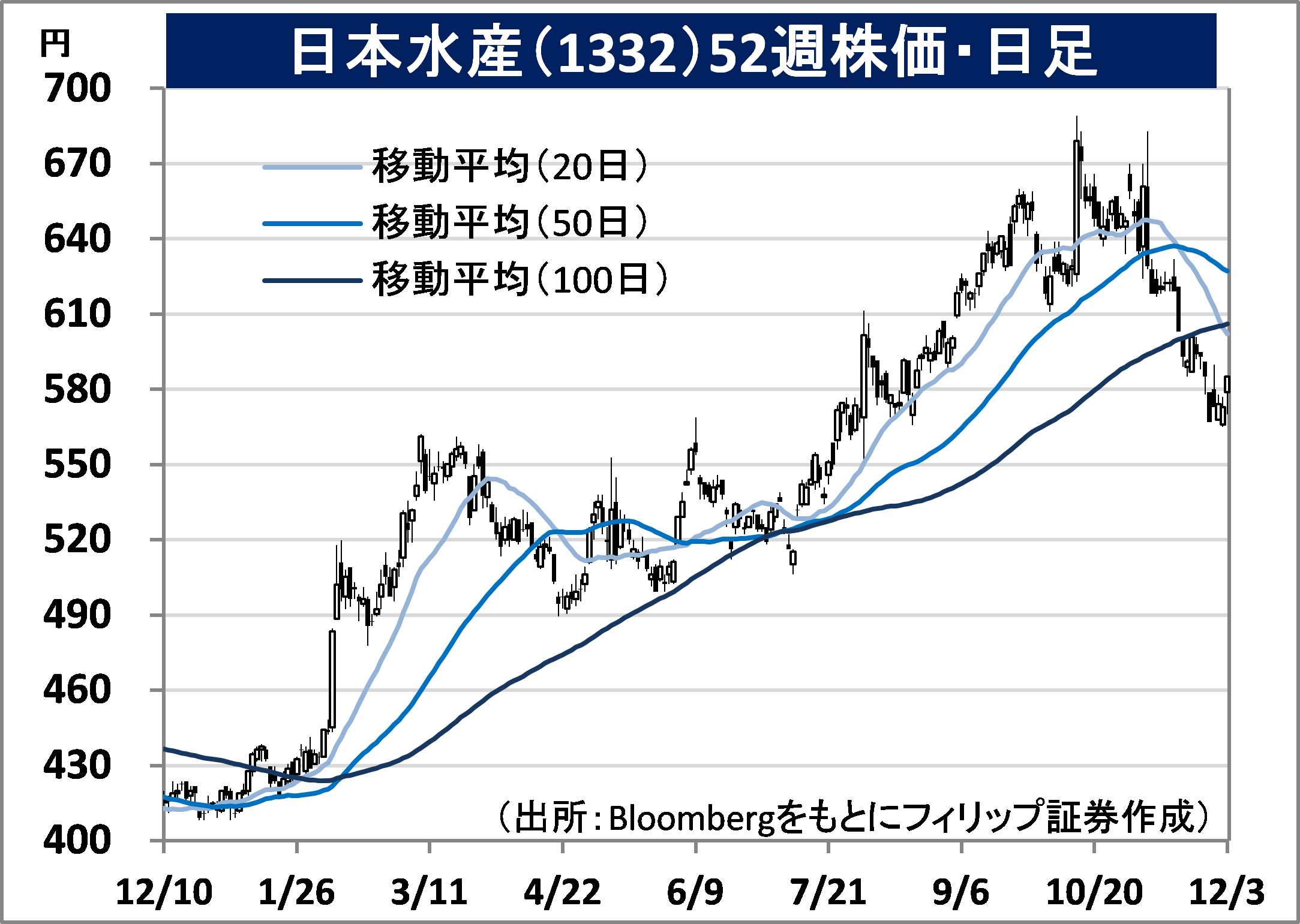 ・For 1H (Apr-Sep) results of FY2022/3 announced on 5/11, net sales increased by 13.1% to 339.611 billion yen compared to the same period the previous year and operating income increased by 2.0 times to 13.866 billion yen. Although the processed Alaska pollock business in North America and domestic fishery struggled, there was improvement in the domestic and overseas fish farming business under the fisheries business, and commercial and industrial retail performed strongly in the West for the foodstuff business.

・Company revised its full year plan upwards. Net sales is expected to increase by 9.4% to 673 billion yen compared to the previous year (original plan 642 billion yen) and operating income to increase by 36.1% to 24.5 billion yen (original plan 20 billion yen). A reinforcement in constitution in the domestic fish farming business and chilled business is expected. In the 2021 product ranking by Nikkei Inc. announced on 2/12, “frozen food economy” was elected as the Komusubi on the west side (fourth rank in sumo). With the increasing presence of frozen food on dining tables in households, Nissui Frozen Foods hold the top share in the domestic market. 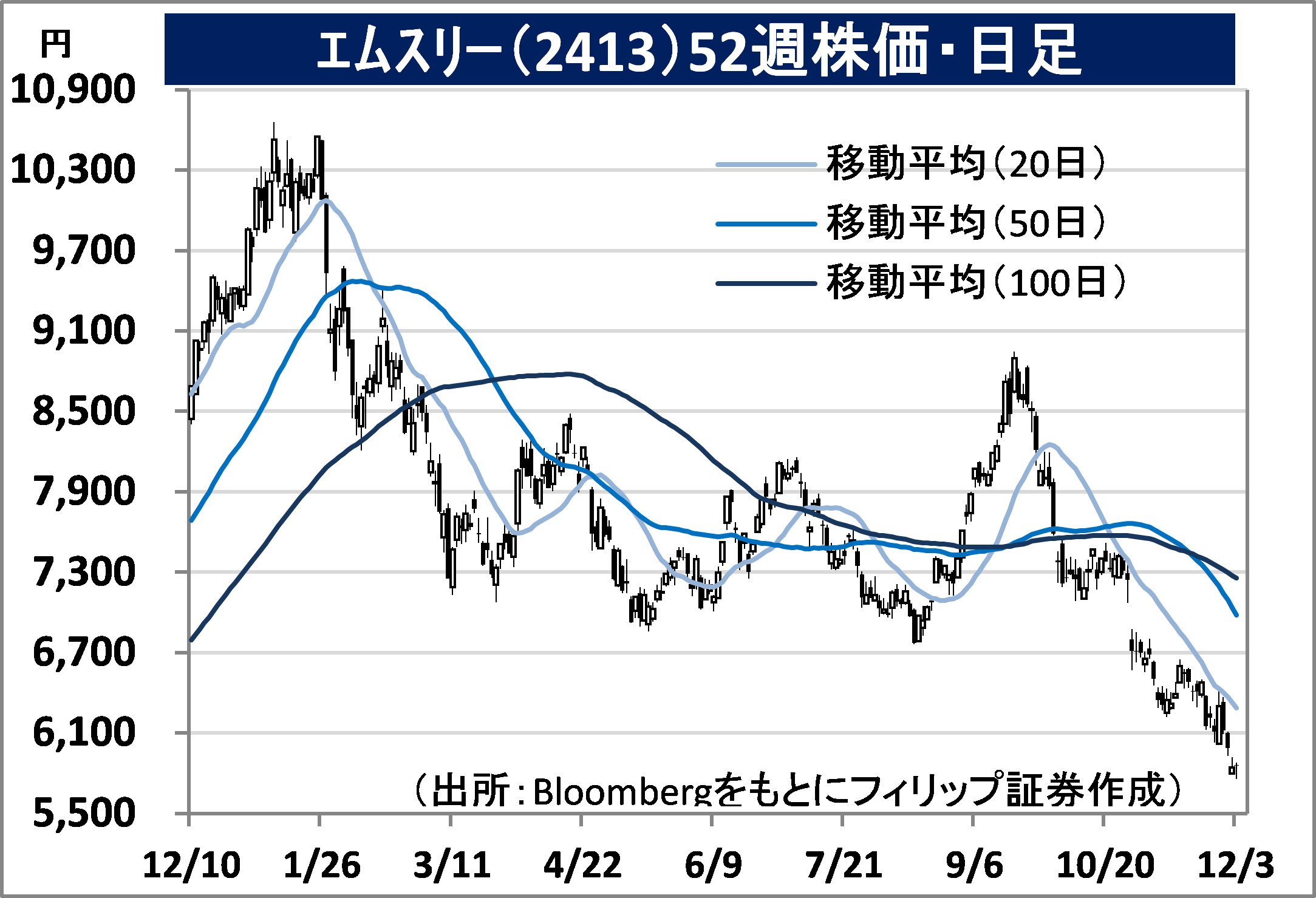 ・For 1H (Apr-Sep) results of FY2022/3 announced on 27/10, sales revenue increased by 30.2% to 97.647 billion yen compared to the previous period and operating income increased by 2.6 times to 61.941 billion yen. In addition to a 24.2% increase in revenue in their mainstay medical platform business involving marketing support for pharmaceutical companies, the expansion of their COVID-19 vaccination support project contributed to pushing up business performance.

・Their full year company forecast is undisclosed due to the inability to reasonably calculate the impact from the global spread of COVID-19. The number of doctors registered in the doctors’ panel and the website for healthcare practitioners operated globally by the same company’s group have reached a total of approx. 6 million. With growing concerns on the spread of the COVID-19 Omicron variant, the policy of each country in the world is to raise their alert level and reinforce PCR and antibody testing. There will likely be increased demand for the company’s businesses.