Japan-Weekly Strategy Report “Is This the First Time to Wait for the Japanese Economy Since the Collapse of the Heisei Bubble?” February 18, 2021 157 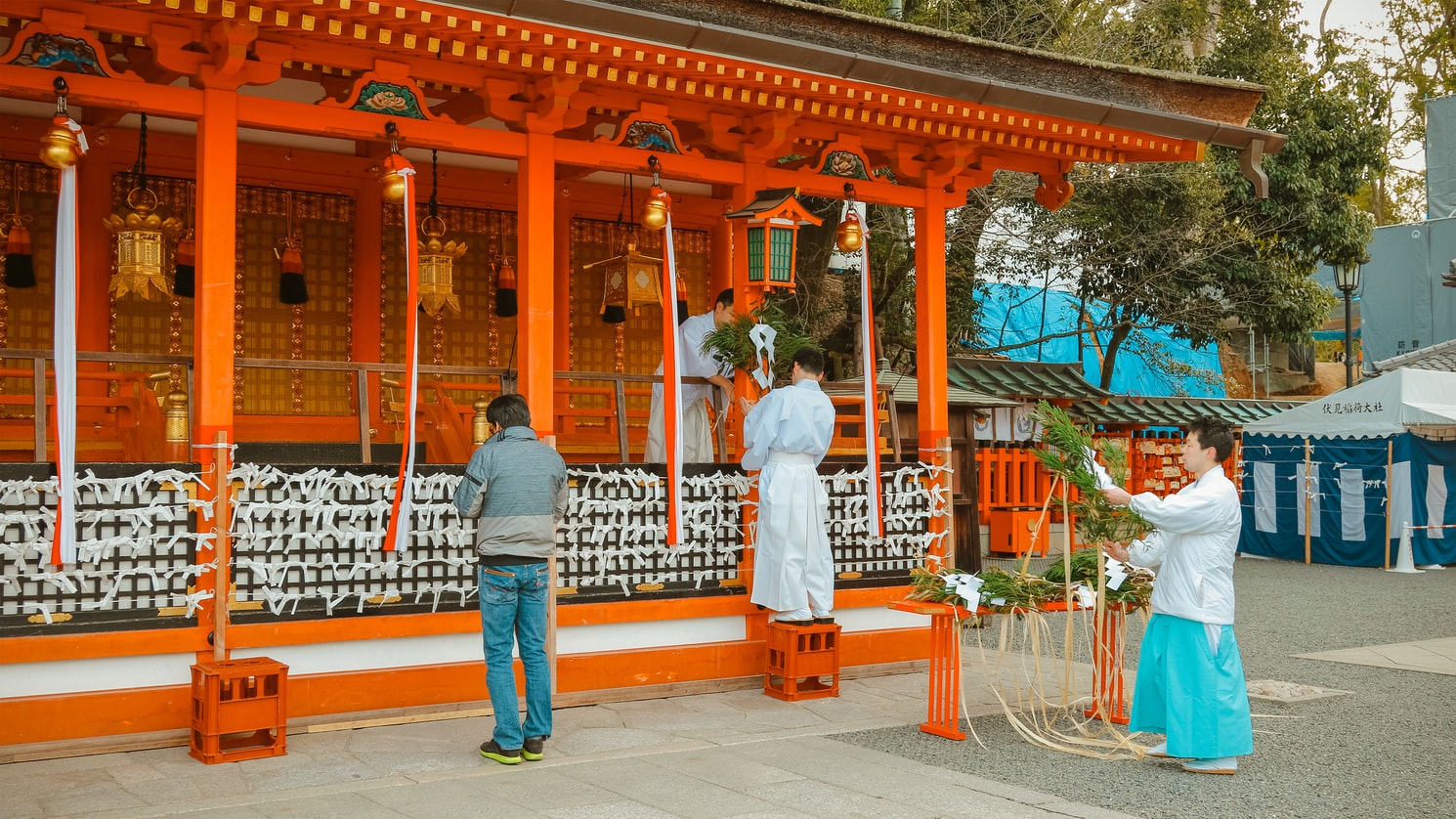 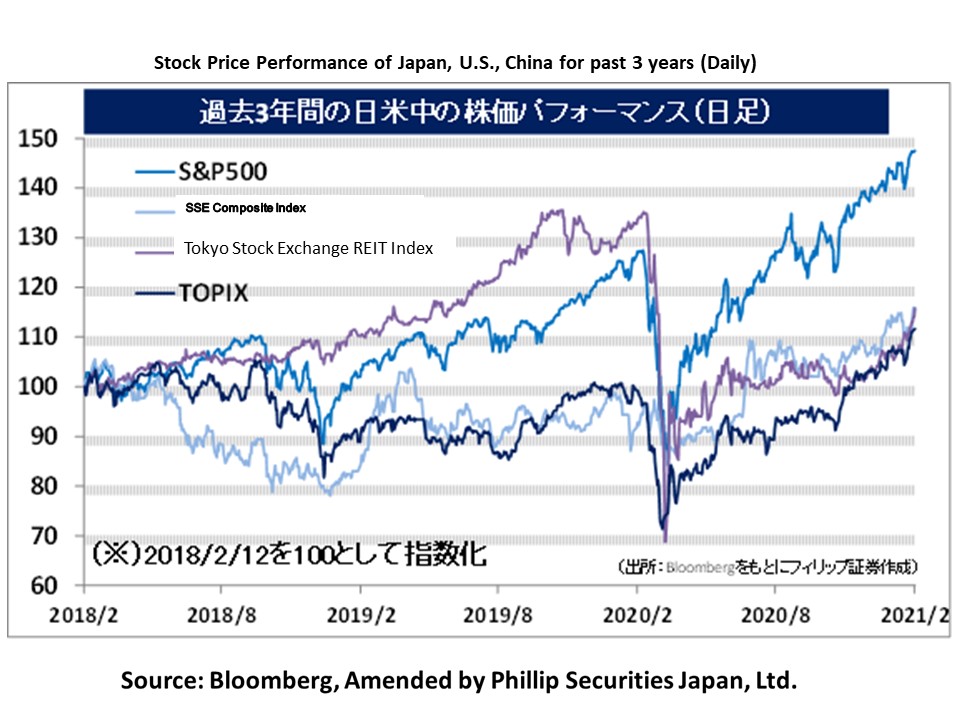 “Is This the First Time to Wait for the Japanese Economy Since the Collapse of the Heisei Bubble?”

The Nikkei average marked 29,650 points right after opening on 12/2, renewing its high since early August 1990. How should investors or consumers react to this news? It seems that there are also views that this is merely a product of excessive liquidity that deviates from the real economy where expectations have been overly weaved into the market on the normalisation of economic activities after the widespread popularisation of vaccine inoculations, and instead, to be wary about a significant fall after the bubble bursts. However, as the saying goes, “to analyse the stock market itself rather than looking to elsewhere”, as investors confronting the stock market, perhaps there is a need for an attitude that pays homage to foresight on stock prices and an attempt to analyse the world that is to come.

Based on this viewpoint, the Japanese economy is presented with the hypothesis that it is facing a situation it has never experienced since the collapse of the Heisei bubble. In the years around 2001-07 where there was an overlap of a continuous decline in the U.S. Dollar Index, a sharp rise in commodity prices, such as crude oil, and emerging markets thriving, such as China, although there was an overheating of the economy and a rise in interest rates in terms of the global economy’s economic cycle, under the Koizumi and Takenaka structural reform, along with an acceleration in globalisation centred on regulatory easing, in the Japanese economy, there was a continuous decline in prices and wages. As also seen from the interest rates, such the 10-year government bonds changing towards a continuous decline after rising to peak at around the 1.9% level in July 2007, it appeared as if the situation involving the rise in prices and interest rates following an overheating of the economy in the 2000s did not present itself in Japan like how it did in various other countries. It was common sense that prices and interest rates did not rise, and it is thought that that came to be the major factor for the growing trend in the same situation persisting in the future.

Also, for mortgage loan interest rates, although previously there was a tendency to consider the change to fixed interest

As seen from the “Comparison with Rises in the Stock Market in the Past” on Page 2, the rise in stock prices since 19/3 last year has reached a speed of approx. 2.5 times the rate of increase between October 1987 to the end of 1989. On the other hand, the speed of the rise from before the U.S. presidential election in November last year up to the present is slower than the rise in the period from before the dissolution of Japan’s House of Representatives in November 2012 up to the inauguration of the 2nd Abe administration and the Bank of Japan’s Governor Kuroda’s unprecedented monetary easing. We recall that it was a year where buying the dips and the adjustment in February due to the season did not apply. 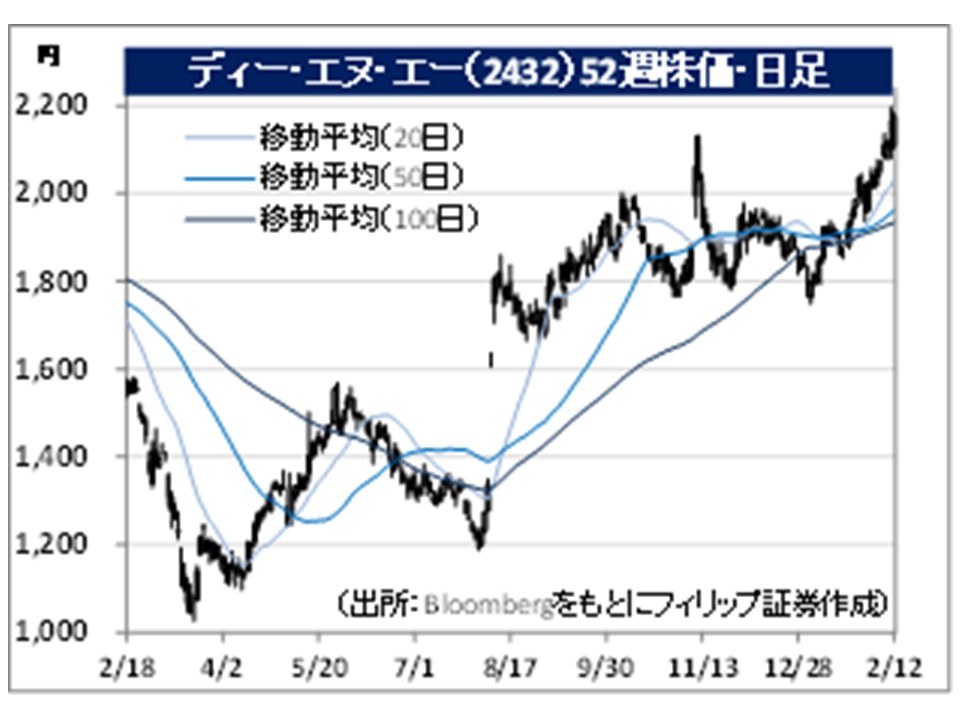 ・For 9M (Apr to Dec) results of FY2021/3 announced on 9/2, sales revenue increased by 12.9% to 102.924 billion yen compared to the same period the previous year and operating income returned to profit from (44.161) billion yen the same period the previous year to 25.32 billion yen. For segment profits, although the sports business fell into deficit, their mainstay game business increased by 63.5% and the live streaming business returned to profit.

・Their full year forecast is undisclosed due to difficulties in reasonably calculating figures. For the game business, those related to “Slam Dunk”, where its copyrights are owned by Toei Animation (4816), contributed to earnings due to a popularisation in Korea and Greater China. A new and well-known title is also planned for release soon in 2021. Following the game business, where both its sales and profits benefitted from consumption from staying at home, in the live streaming business, which has become their pillar, we can expect new expansion, such as into live commerce, etc. 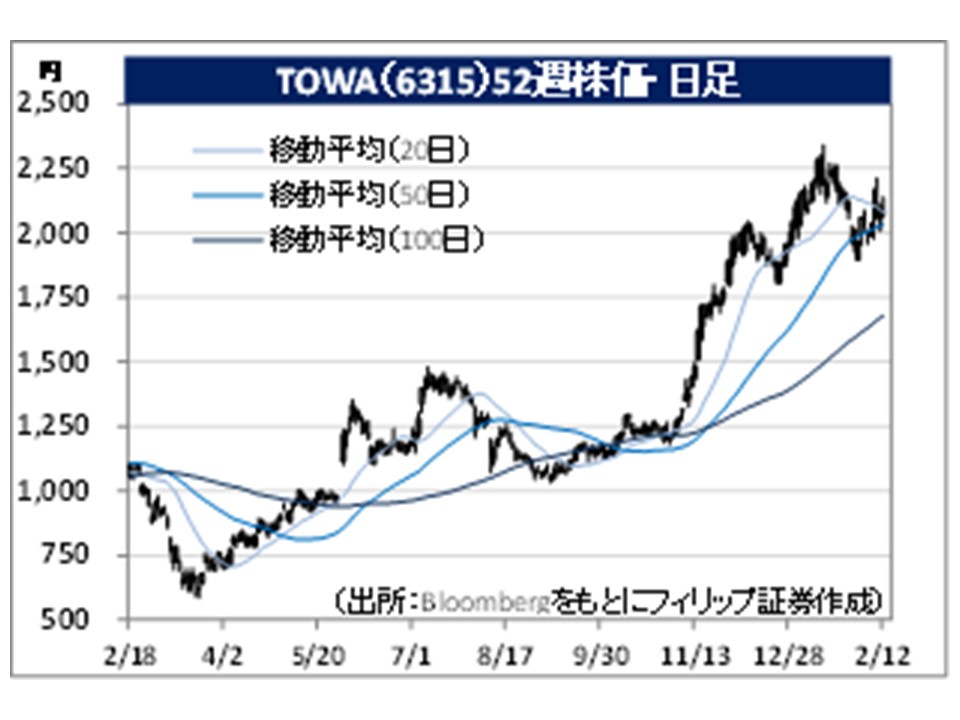 ・For 9M (Apr-Dec) results of FY2021/3 announced on 5/2, net sales increased by 10.2% to 20.715 billion yen compared to the same period the previous year and operating income increased by 12.0 times to 2.327 billion yen. China, which is promoting next-gen infrastructure investment and in-house semiconductor production, and Taiwan, which is continuing proactive investment by benefitting from the rise in demand for a wide range of products, have contributed to the increase in income and profit in their mainstay semiconductor equipment business.

・Company revised their full year plan upwards. Net sales is expected to increase by 14.8% to 29 billion yen compared to the previous year (original plan 26.77 billion yen) and operating income to increase by 4.1 times to 3.3 billion yen (original plan 2.31 billion yen). There is a predicted increase in production capability in respective semiconductor manufacturers and an increase in sales for high value-added products, such as those related to 5G. Also, regarding the “post-process” of semiconductors, which is the main area of competition for the company’s products, it was reported that the Taiwanese TSMC, the world’s top in receiving production consignments, will set up a development base in Japan with an investment sum of 20 billion yen.