Japan-Weekly Strategy Report “Is the Materials Sector the Main Player in the Post “Pro-Buyback” Market? March 22, 2021 183 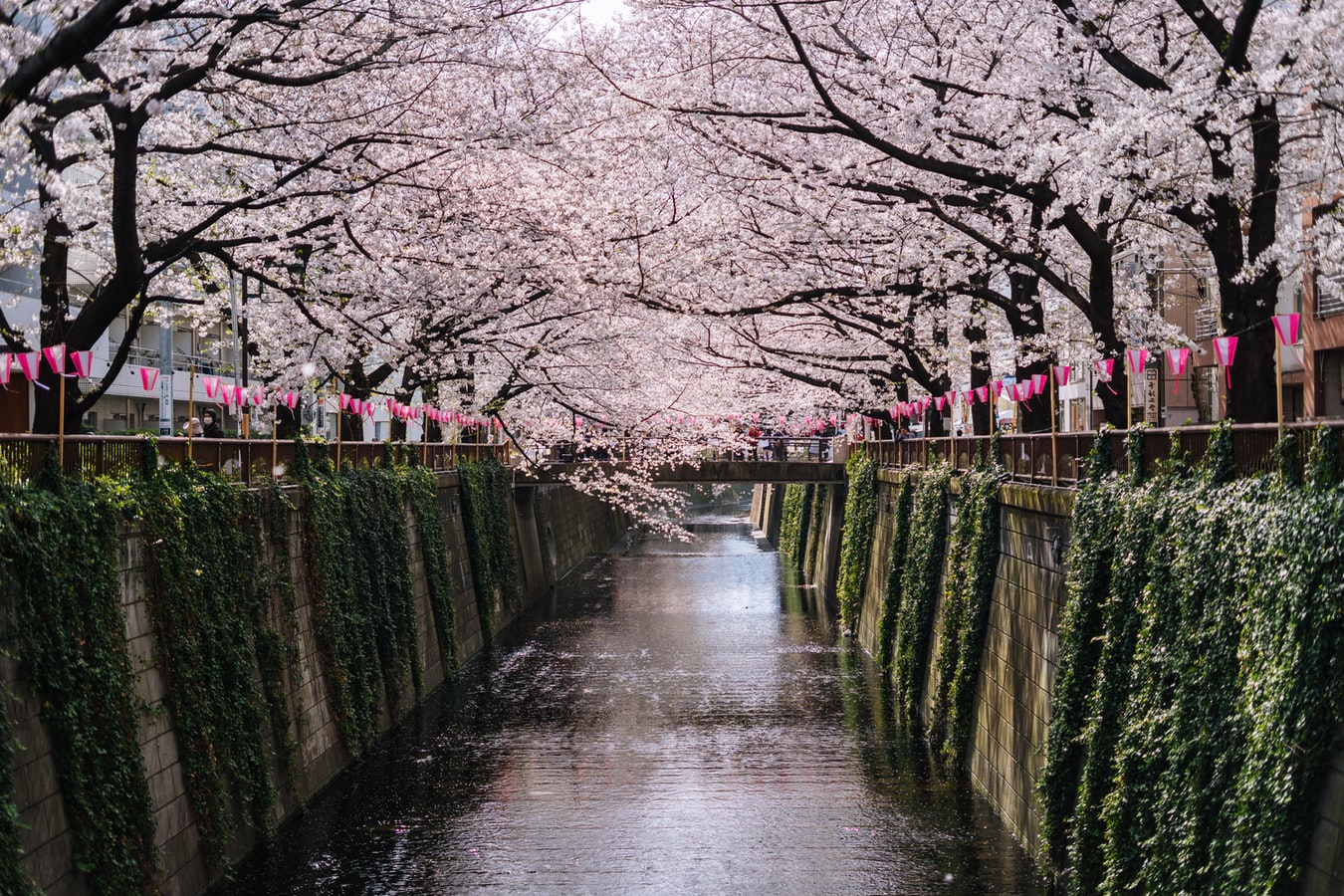 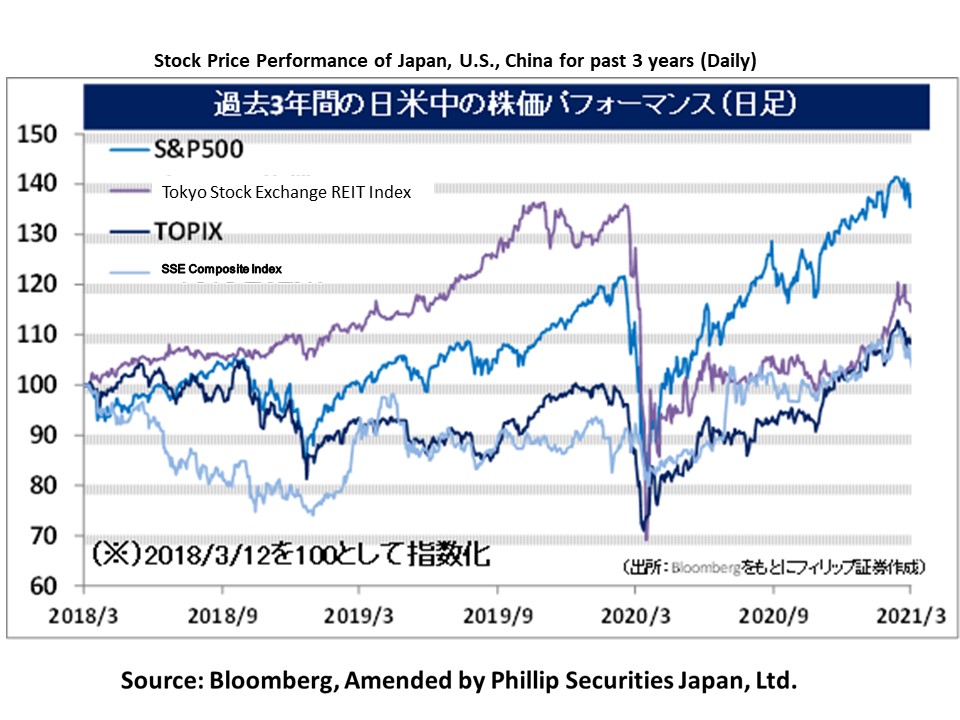 “Is the Materials Sector the Main Player in the Post “Pro-Buyback” Market?

What will be the force that drives an increase in the stock market after the pro-buyback bull market? With the conclusion of an additional large-scale economic measure bill of about 1.9 trillion dollars by the Biden administration in the U.S. on 11/3, concerns of an increase in interest rates and prices along with economic expansion and the increasing shift worldwide from high P/E ratio growth stocks to economic cycle value stocks, there has been a growing sense of the stock market peaking on the whole. In contrast, there have been indications of a stance in absorbing the negative impact following the increase in U.S. government spending, such as the ECB (European Central Board) deciding to speed up the pace of bond purchases under the Pandemic Emergency Purchase Program (PEPP) in order to put a stop to the increase in Euro government bonds. There is attention on whether the Bank of Japan will also follow the ECB at the Bank of Japan’s Monetary Policy Meeting scheduled for 18-19/3.

Under a state of a dollar depreciation, in the period where a prominent “emerging country shift” and “commodity shift” were observed in the years between 2000-07, even in the TOPIX 33 Sector Indices, “Iron and Steel” and “Marine Transportation” had better performance than others. In the U.S. S&P 500 Industrials Sector Index as well, “Materials” in addition to “Energy” and “Financials” are performing strongly. Those leading “Materials” are the copper and molybdenum production giant Freeport-McMoRan (FCX), the world’s largest gold mining company Newmont (NEM), the steel manufacturer Nucor (NUE) and the chemicals giant Dow Inc (DOW). Perhaps there is room to also look out for Japanese corporations competing worldwide with them, such as Sumitomo Metal Mining (5713), Nippon Steel (5401), Sumitomo Chemical (4005) and Mitsubishi Chemical Holdings (4188), etc. Also, in the Corporate Goods Price Index released by the Bank of Japan on 11/3, there is attention on the 16.5% increase in metals and copper products and the 4.2% increase in chemical products compared to the same month year-over-year, which exceed other industries. 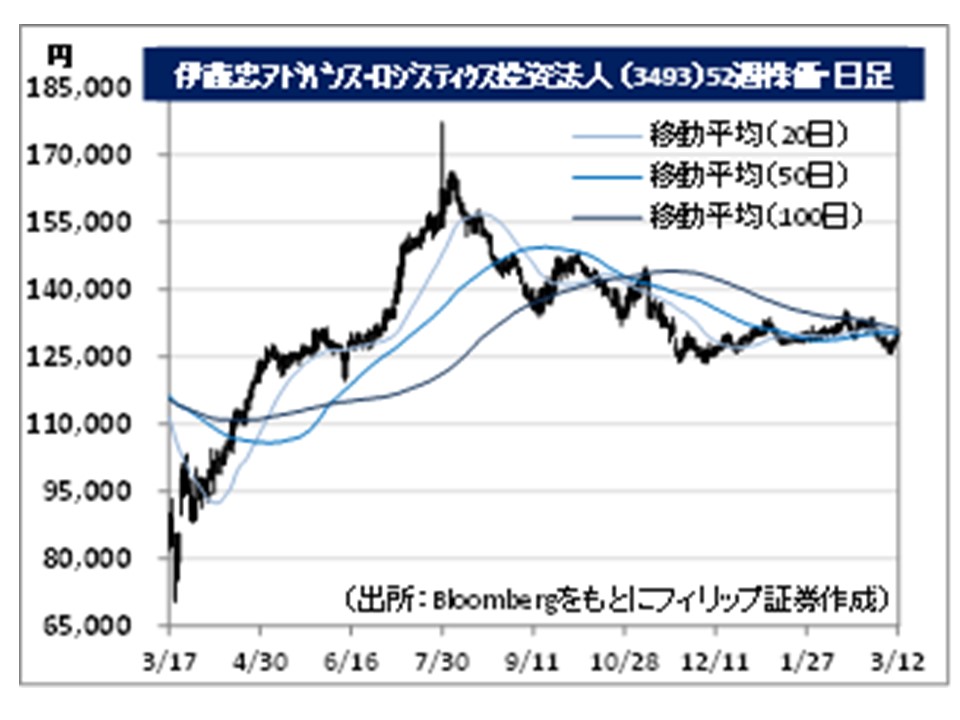 ・Established in 5/2018. Company is a logistics facility REIT sponsored by ITOCHU (8001) with strengths in businesses related to lifestyle consumption that have high affinity with logistics. Their flagship property is “i Missions Park Inzai” in Chiba Prefecture.

・For its FY2021/1 plan, operating revenue is expected to increase by 2.4% to 2.456 billion yen compared to the previous period (FY2020/7), operating income to decrease by 0.2% to 1.19 billion yen and distribution per share to increase by 3.6% to 2,508 yen. Company forecasted dividend yield up to FY2021/7 at the closing price on 11/3 is 3.89% and NAV (net asset value) ratio is 1.07 times. For logistics facilities, due to relatively highly stable earnings from the conclusion of long-term fixed rental fee contracts with tenants, the dips could be an opportunity. 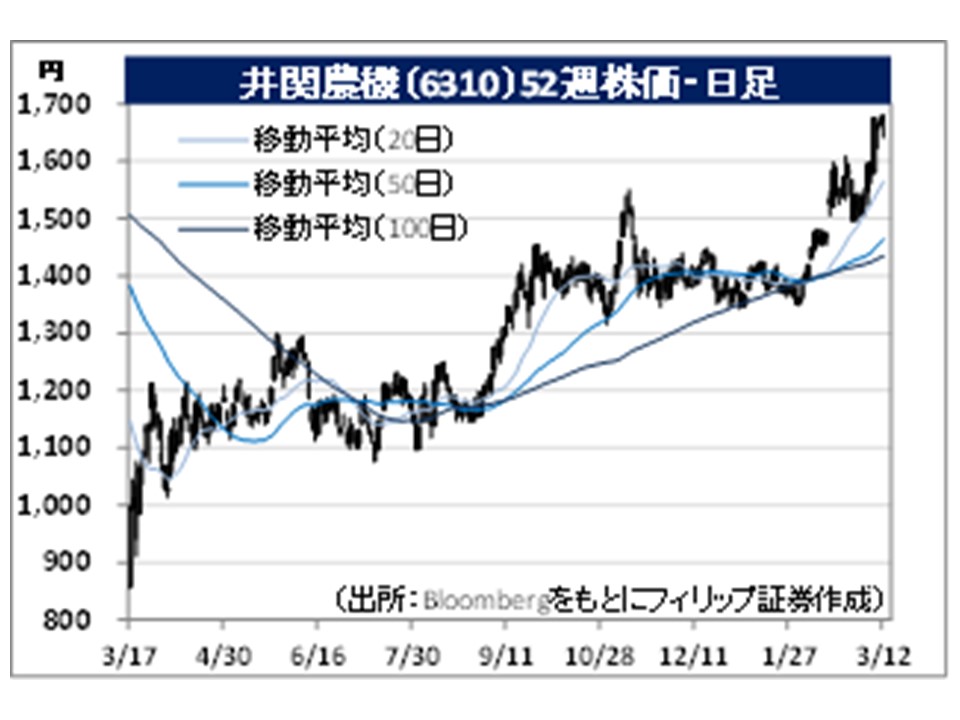 ・For FY2020/12 results announced on 15/2, net sales decreased by 0.4% to 149.304 billion yen compared to the same period previous year and operating income decreased by 24.1% to 2.084 billion yen. Due to the record of the provision for doubtful receivables, an evaluation loss involving affiliated company stocks and impairment losses involving assets for domestic businesses and domestically-owned real estate, net income fell into deficit from 723 million yen the previous year to (5.641) billion yen.

・For its FY2021/12 plan, net sales is expected to increase by 2.8% to 153.5 billion yen compared to the previous year and operating income to increase by 72.7% to 3.6 billion yen. Under structural changes in the agriculture industry that make it difficult to secure a foreign workforce worldwide following restrictions in movement, it is predicted that components and repair revenue along with large-scale machines and smart agricultural machines, etc. will perform strongly. Also, the record of the large sum of impairment loss last year is likely to be regarded positively in the aspects for improving the balance sheet, such as the depreciation of fixed assets and inventory reduction, etc.