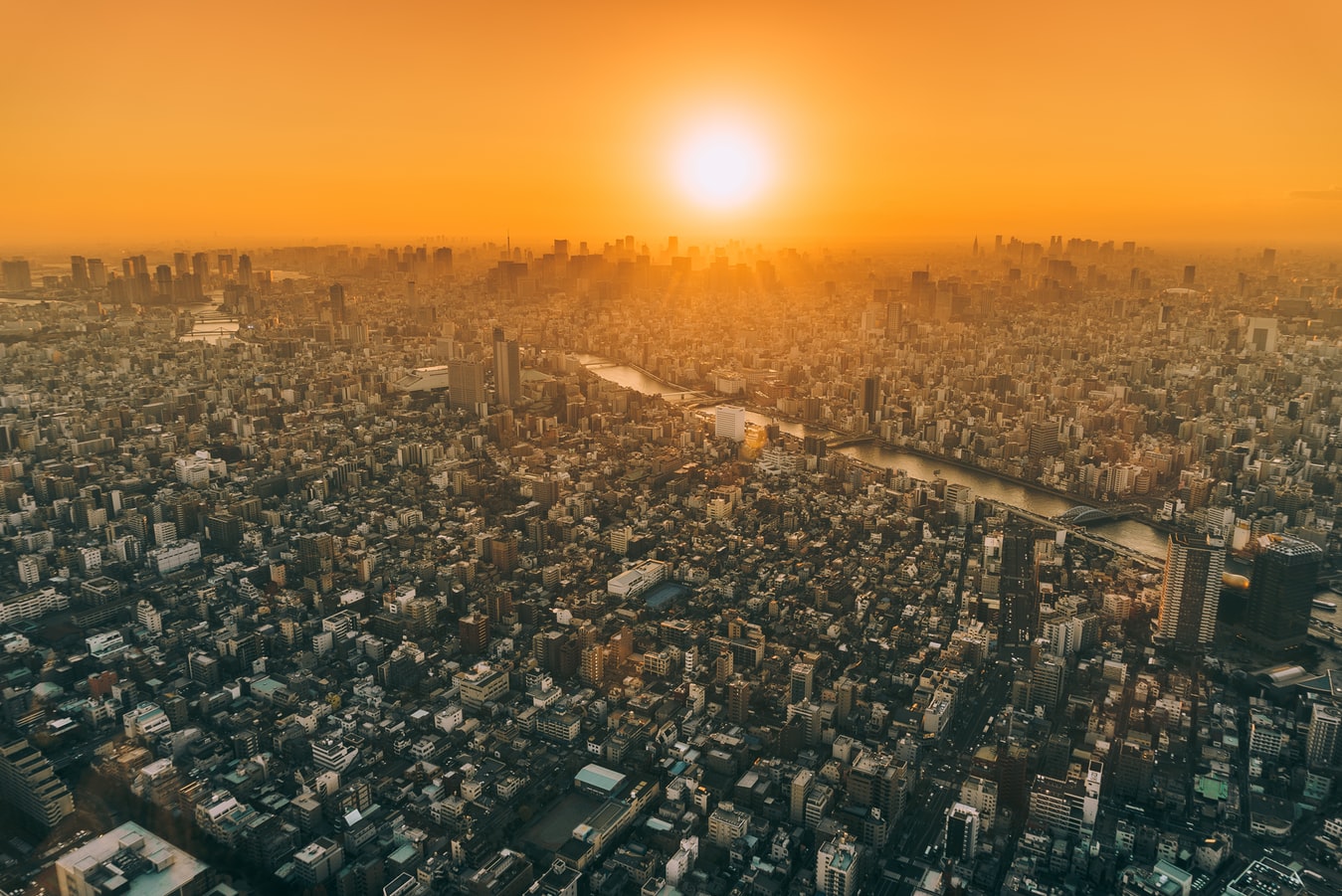 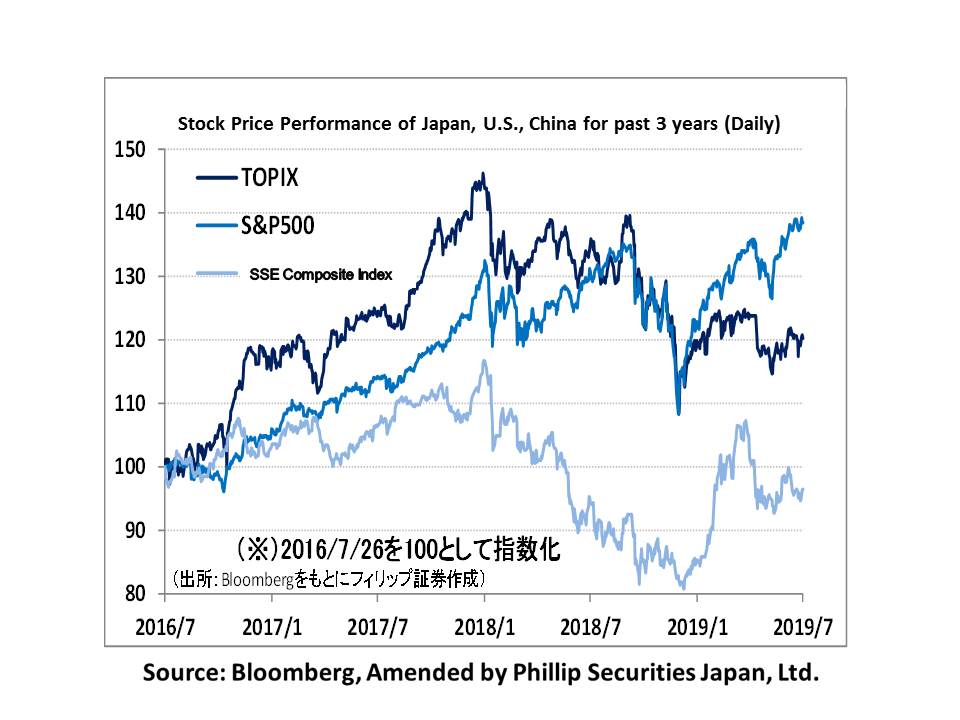 “Information Banks”, the New Business in the Age of Data Capitalism

In the House of Councilors election on 21/7, the coalition ruling party comprising the LDP and Komeito won 71 seats, more than the required majority of 63 seats. With results as expected, the focus of the market shifted to monetary policies in each country and trade friction issues. After the elections on 22/7, and following a report from WSJ that President Bullard of the Federal Reserve Bank of St. Louis had stated that there was no need to cut the interest rate by more than 25bp at the next FOMC, TOPIX reacted by falling 0.49% compared to the previous weekend. After that, with expectations that the US might be easing sanctions against Huawei, the resumption of the US-China trade talks and strong corporate results such as those from Coca-Cola (KO), TOPIX rose for three continuous days.  However, TOPIX ended the week with a drop on 26/7, as a result of subdued expectations of an interest rate hike arising from strong orders for US durable goods, and also because President Draghi of the ECB did not provide dovish views as was expected.

Data is now seen as the “Oil of the 21st Century”, and companies are using networks to acquire all types of data related to users, and using them for their own service provision.  With the advance of IoT, all kinds of data are being freely distributed.  As with people, goods and money, the age of “data capitalism”, whereby data is the basis of management resources, is coming. However, following the problem of personal information leakage at Facebook (FB), it has become clear that one is now not certain how one’s personal information is being used.  In exchange for convenience, the usage of personal information, without any consideration whatsoever, collected by platform providers, such as “GAFA” (Google, Apple, Facebook, Amazon) in the US, and “BAT” (Baidu, Alibaba, Tencent) in China, is now viewed as a problem, and currently, an international debate is being carried out on the introduction of regulations.

Under such circumstances, the growth strategy of the government’s Council on Investments for the Future is now focusing on “development of rules for the digital market”. On 26/6, the Japan Federation of IT Associations designated Sumitomo Mitsui Trust Bank and FeliCa Pocket Marketing as the first domestic information banks.  An information bank provides a service that collects personal information, such as purchase history and age, with the consent of the user, and provides these information to other companies.  In return, users enjoy discounts and receive services that take into account their respective attributes and preferences. In addition, on 16/5, NTT Data (9613) also announced plans to put into practical use within FY2019 an information foundation. As the information bank business handles personal information, from a sense of security, traditional companies such as megabanks will dominate this sector. If that happens, it will be an opportunity to revitalize the sluggish stock market. 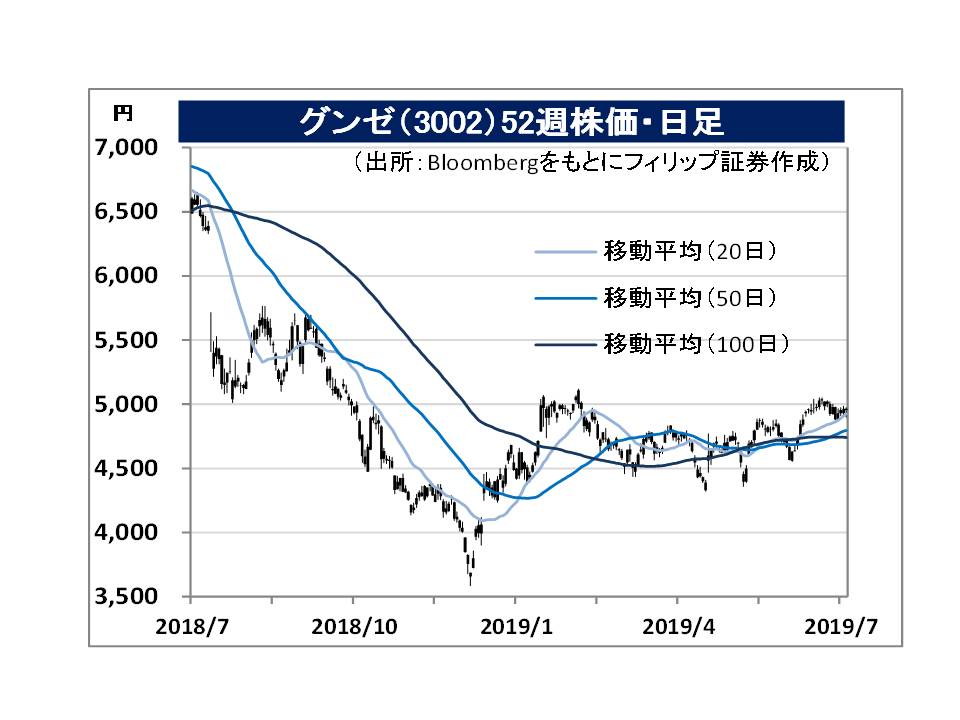 ・Established in 1896. In addition to the Apparel Business consisting of apparel and textile materials, other main business also includes the Function Solutions Business for functional materials, mechatronics and medical materials, and the Lifestyle Comfort Business managing real estate and sports clubs.

・For FY2019/3 results announced on 14/5, net sales increased by 0.1% to 140.706 billion yen compared to the same period the previous year, and operating income increased by 7.2% to 6.69 billion yen.  The plastic film and engineering plastics sectors in the Functional Solutions Business had performed well, with net sales increasing by 4.7% over the previous year, and operating income increasing by 14.5%, contributing to the increase in sales and profits.

・For FY2020/3 plan, net sales is expected to increase by 4.5% to 147.0 billion yen compared to the previous year, and operating income to increase by 4.6% to 7.0 billion yen. “in.T”, an inner wear for T-shirts released on 2019/3, has been selling well, with good news that there is a continuing shortage of the product. In the medical sector, suture reinforcements and collagen-based artificial skins are also selling well.  With the acquisition of Medical U&A, Inc., company is aiming to expand its bone bonding materials business. We can therefore look forward to further growth for this company.

・For 1Q (Apr-June) results of FY2020/3 announced on 24/7, net sales increased by 0.7% to 386.211 billion yen compared to the same period the previous year, operating income increased by 12.7% to 107.502 billion yen, and net income increased by 14.0% to 84.028 billion yen.  In the silicones sector, despite the decline in general-purpose product prices, company’s effort in expanding sales of functional products had resulted in strong sales. Semiconductor silicones also maintained high levels of shipments.

・Company has also announced its FY2020/3 plans during its 1Q results announcement. Net sales is expected to decrease by 2.8% to 1.55 trillion yen compared to the previous year, operating income to increase by 0.3% to 405.0 billion yen, and net income to increase by 1.6% to 314.0 billion yen.  Although sales are expected to decrease due to market conditions, etc., company aims to secure profitability by strengthening cost competitiveness. Annual dividend forecast is 220 yen, up by 20 yen over the previous year.