■ Increase in the Bank of Japan’s Price Outlook, Europe Risks and the Long-Term EV Outlook

On the 21st at the Monetary Policy Meeting, the Bank of Japan decided to maintain the current large-scale monetary easing that keeps interest rates low, and at the same time, it raised the outlook for price inflation this fiscal year from 1.9% indicated in April to 2.3%. Although the Bank of Japan states that this price inflation is not accompanied by a wage increase, it is expected that it will cause an increase in the negative real interest rate (inflation-indexed bonds), which is obtained by deducting the expected inflation rate from the nominal interest rate. In theory, when there is a negative real interest rate, due to the value of money being less than the value of goods, it would be more beneficial to purchase goods or for capital investment by borrowing money, which would tend to function in the direction of the way the economy goes. However, there will likely be caution on the aspect of an increase in pressure of the yen depreciating against the dollar due to the increase in difference between the U.S. and Japan’s real interest rate.

As of the 20th, for the closing price of the U.S. and Japan’s 10-year inflation-indexed bonds (TIPS), compared to the U.S. at +0.642%, Japan was -0.701%. In terms of financial environment, Japan’s economy is more readily influenced compared to the U.S., therefore, for the stock market as well, perhaps there is also an aspect where Japan’s economically-sensitive stocks and growth stocks tend to be bought easier than those of the U.S.

The focus of the global financial market is gradually shifting towards Europe. In response to the rate of increase of the Consumer Price Index (CPI) for June in the eurozone having increased by 8.6% compared to the same month the previous year which is a record high, an interest rate hike of 0.50%, which is double the usual, was decided at the European Central Bank (ECB) council meeting on the 21st. However, the eurozone possesses a structural vulnerability of an issue of “regional disparity” due to the increase in interest rates in Southern Europe, which is heavily in debt. Most recently, in Italy, the coalition government collapsed from the resignation of Prime Minister Draghi, which is spurring political confusion. The Italian government’s outstanding debt to GDP ratio has exceeded 150% of late compared to being at only around 120% between 2010-2011 when the European debt crisis occurred. Europe’s weakness is not only limited to risks of economic cooling following concerns of Russia’s natural gas supply to Germany. If there is an increase in Southern Europe’s government bonds following the disparity with Germany’s government bonds, sooner or later, a situation may emerge which will test the effectiveness of the “Transmission Protection Instrument (TPI)”, which was approved as a new bond purchase measure at this council meeting.

In the annual long-term EV (electric vehicle) outlook announced by BloombergNEF on 1/6, as the primary cause for acceleration in popularisation in China, global sales of EV passenger cars is expected to be at 20.6 million vehicles in 2025, which is slightly over 3 times the current and greatly exceeds the 14 million vehicles estimated a year ago. It is said that EV passenger cars use approx. 4 times more copper than passenger cars that use petrol, etc. China is the country that consumes the most amount of copper and as a result of its economic slowdown following its zero COVID policy, the price of the LME Copper futures (3-month contract) fell by more than 30% from its high since the beginning of the year that was marked in March recently. This might turn out to be an investment opportunity for nonferrous metal enterprises that deal with copper. 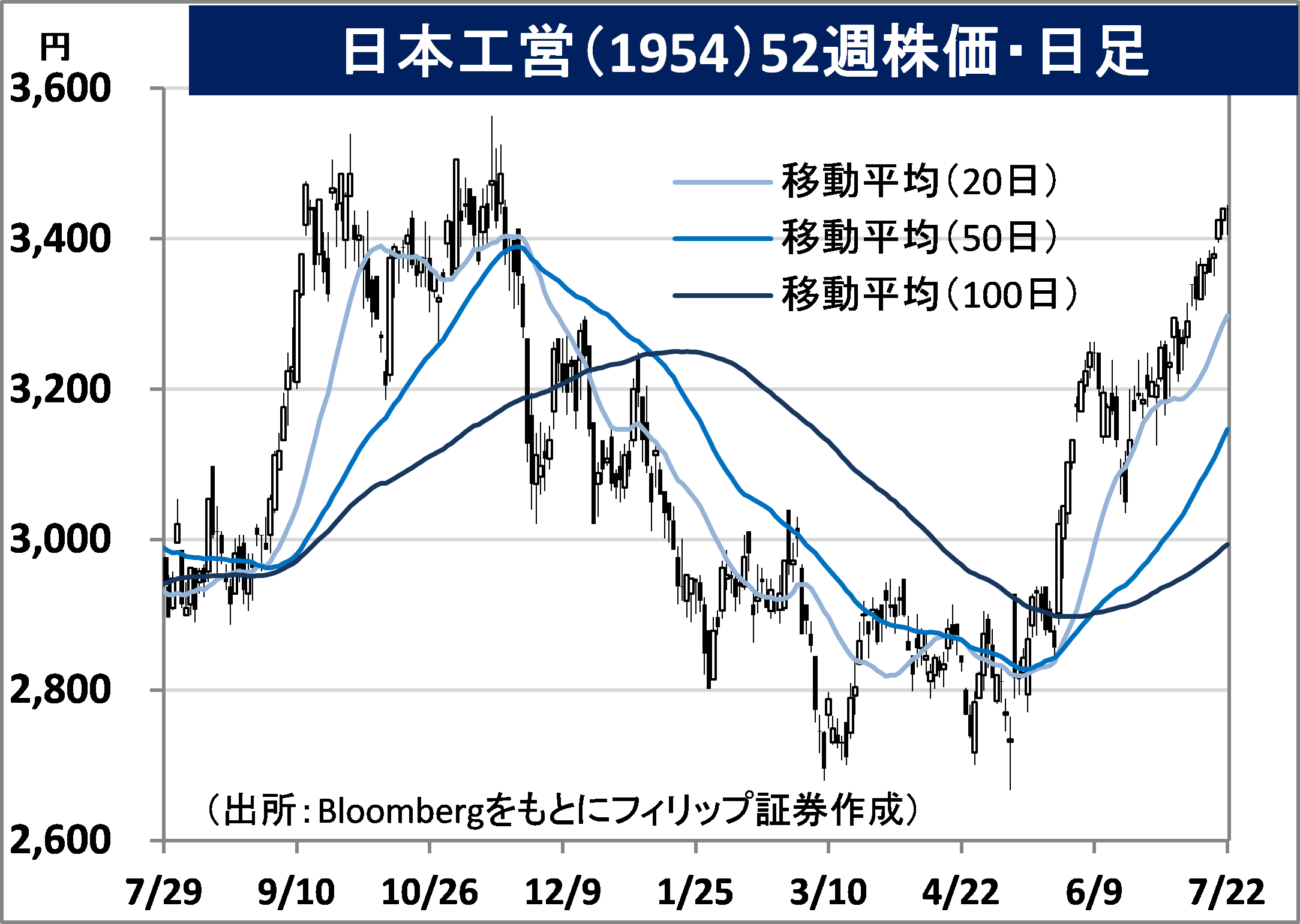 Company revised its full year plan upwards. Although sales revenue remains unchanged to increase by 11.1% to 131 billion yen compared to the previous year, operating income is to increase by 26.3% to 9 billion yen (original plan 7.7 billion yen). Annual dividend is forecasted to have a 25 yen dividend increase to 100 yen. In addition to the company’s participation in the development survey of “Nusantara”, the new capital of Indonesia, along with SI giant TIS (3626), they are investing in an Indonesian Fintech enterprise which provides a transportation system electronic payment service, which will greatly contribute to Indonesia’s national policy (infrastructural development). 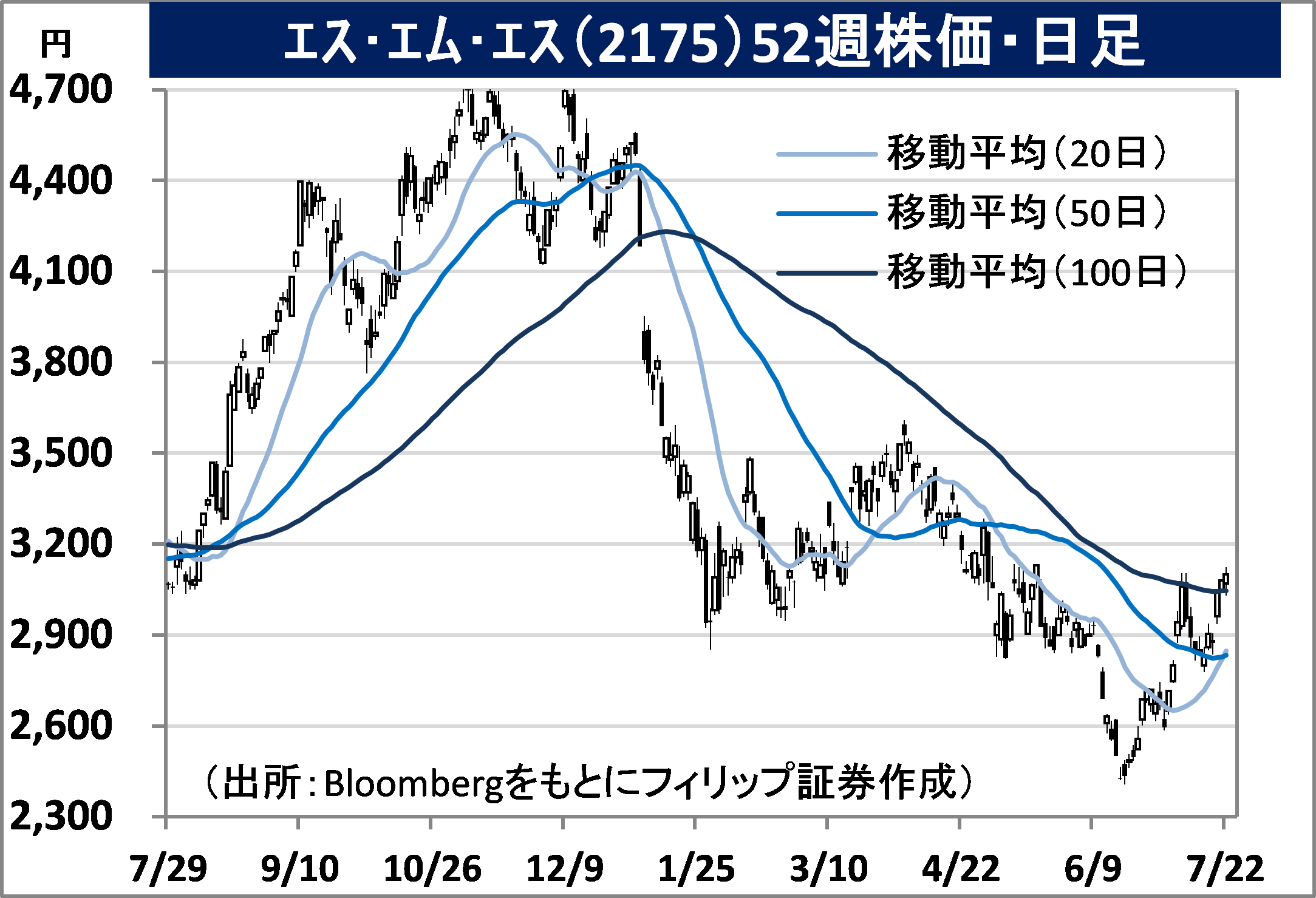 For its FY2023/3 plan, net sales is expected to increase by 18.4% to 46.063 billion yen compared to the previous year and operating income to increase by 14.6% to 7.238 billion yen. An increase in members is expected in the nursing care operators field. Regarding improvement in staff treatment in nursing care and nursing professions, as the focal policy of “enabling a good cycle of growth and distribution” via the Kishida administration, the salary of nurses is said to be raised by 4,000 yen which is equivalent to 1%, and for the salary of nursing care professions, by 9,000 yen which is equivalent to 3%, which is expected to benefit the company’s career field.