Japan-Weekly Strategy Report “High manufacturing costs and Bitcoin are the seeds of turbulence after May” May 11, 2021 222 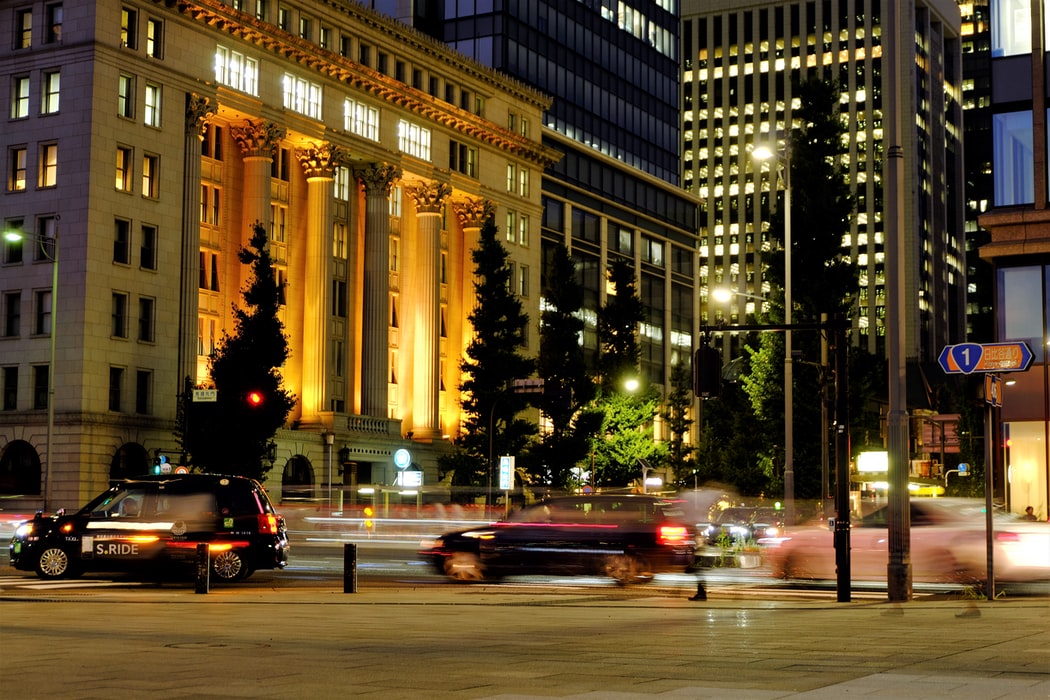 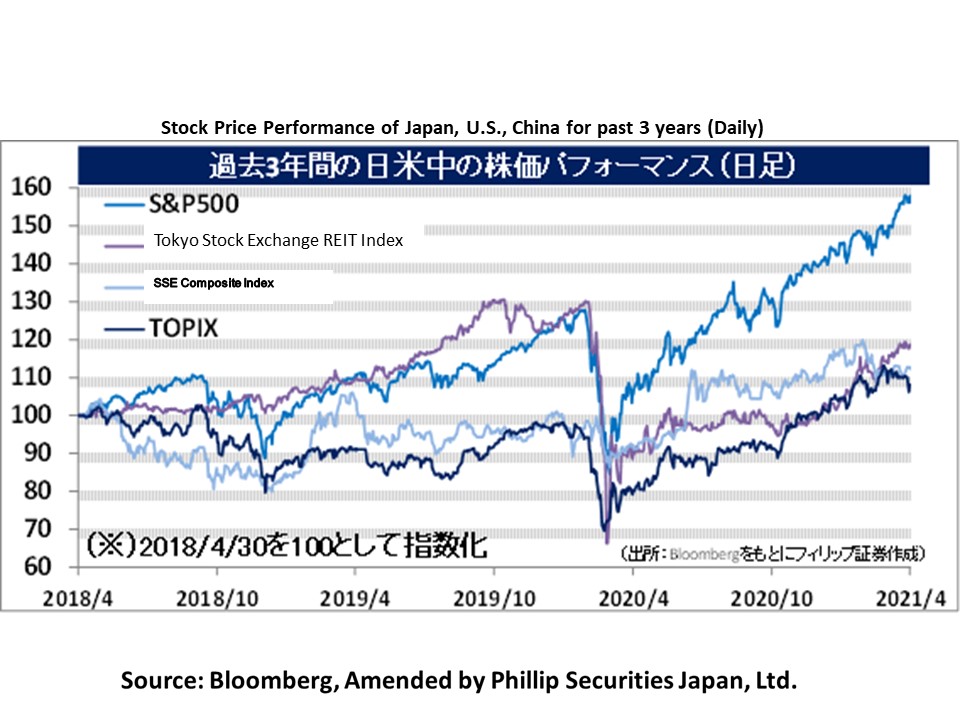 On 25/4, the LDP lost the by-election and re-election for three electoral districts in the Lower House and Upper House of the Diet, the first national elections since the inauguration of the government in September last year.  The administration appears to be in turmoil because of growing concerns that the Olympic Games may be in jeopardy if the emergency declarations issued from 25/4 to 11/5 in Tokyo and three prefectures do not succeed in controlling the spread of Covid-19.  If it becomes difficult to dissolve the Lower House and hold a general election on the basis of the success of the Olympics, it may be possible to implement a large-scale additional economic stimulus package for Covid-19 relief before the situation becomes unfavorable, before bringing the general election forward.  It is therefore important to pay attention to political developments in Japan.

In the US, the 100-day “honeymoon period” after the inauguration of the president has passed as at the end of April.  While the stock market is said to be less likely to experience turbulence during this period, President Biden delivered his first State of the Union address to a joint session of the US Senate and House of Representatives on 28/4, announcing a $1.8 trillion “American Families Plan” that includes spending on child care and education, in addition to the $2.25 trillion “The American Jobs Plan” for infrastructure investment that has already been announced.  As a result, the policies of the US Democratic Party and President Biden seem to be all in place, with proposals to raise the top federal income tax rate and substantially increase the capital gains tax on the wealthy with annual incomes of over $1 million.  The Japanese stock market is expected to be more volatile owing to the uncertainty over the domestic political situation and the fact that May, which tends to be a “sell-in May” month in the US market, coincides with the end of the honeymoon period of the presidential inauguration.

First of all, the rise in raw material costs is becoming noticeable for the manufacturing industry, as the LME copper futures price reached its highest level since August 2011 on 26/4, and in addition, the rise in transportation costs due to the disruption in logistics is beginning to affect corporate earnings.  While this is expected to be a tailwind for shipping companies that handle container ships and manufacturers of non-ferrous metals and materials, higher costs may begin to negatively affect  corporate  earnings  in  a wide   range of industries.

Trends in the price of the cryptocurrency Bitcoin may also affect the stock market.  The cycle between the arrival of the quadrennial half-life of mining rewards and the soaring price of Bitcoin has repeated itself in the past two half-lives, with a sharp rise until one year or one year and five months after the half-life, followed by a sharp fall.  Considering that the market capitalization of the Bitcoin market has swelled to a huge amount more than ever before, with exactly one year having passed since last year’s half-life by May this year, the impact on the stock market if the Bitcoin price were to plummet cannot be underestimated. 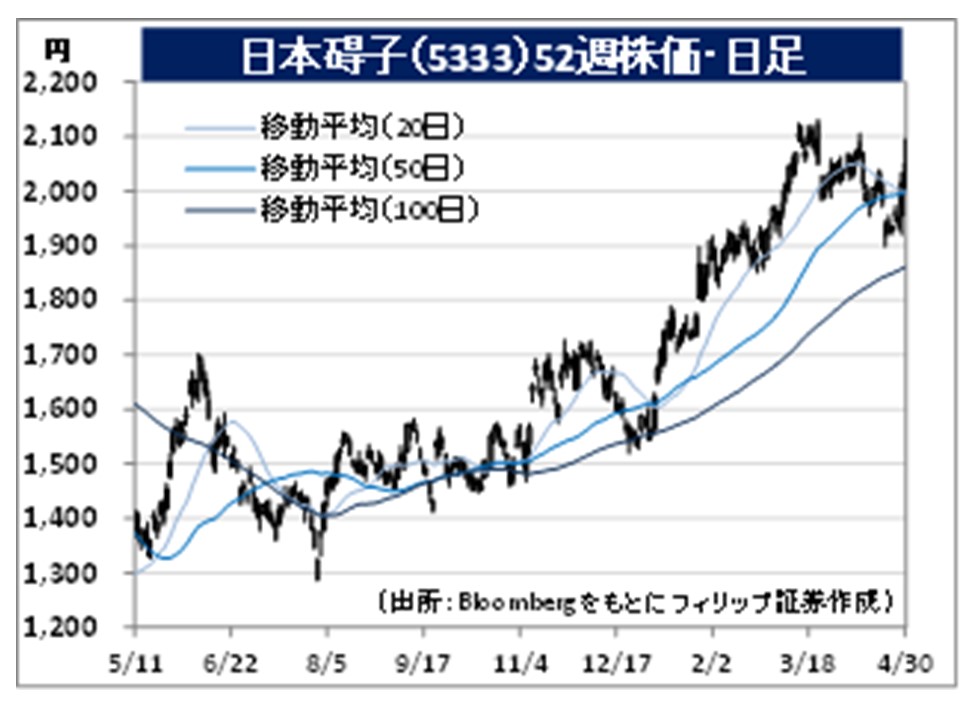 ・The insulator division was spun off from what is now Noritake Co., Ltd (5331) in 1919.  Is top player  in the world for insulators.  Operates four businesses, namely, Energy Infrastructure, Ceramic Products, Electronics, and Process Technology.

・For FY2021/3 results announced on 28/4, net sales increased by 2.3% to 452.043 billion yen compared to the previous year, and operating income decreased by 7.6% to 50.823 billion yen.  Higher sales in the Process Technology Business, which handles products for semiconductor production equipment, contributed to higher sales, but lower profits in the Ceramics Products Business due to lower sales in the global automotive market in the first half of the fiscal year impacted profits.

・For FY2022/3 plan, net sales is expected to increase by 7.3% to 485.0 billion yen compared to the previous year, and operating income to increase by 37.7% to 70.0 billion yen.  Expect growth in automotive-related parts on the back of tighter exhaust gas regulations as demand recovers in the global automotive market.  The NAS battery using sodium (Na) and sulfur (S) researched and developed by company is a high-capacity/high-energy-density/long-life power storage system that will play an important role in the spread of renewable energy. 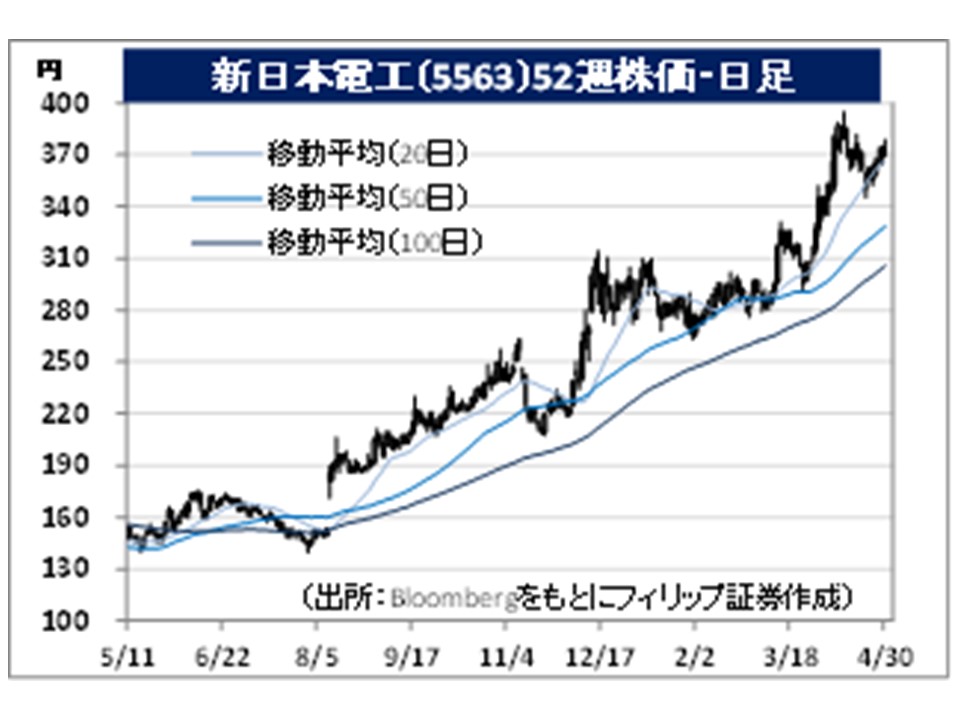 ・A manufacturer of alloys for steel established in 1934.  A group company of Nippon Steel (5401), the largest shareholder, company is engaged in the manufacture and sale of ferroalloys, its main business, as well as functional materials, environment, electric power, and other businesses.

・For FY2020/12 results announced on 8/2, net sales decreased by 23.4% to 54.004 billion yen compared to the same period the previous year, and operating income turned profitable to 5.434 billion yen from minus 5.579 billion yen in the same period of the previous year.  The decline in crude steel production and lower sales of hydrogen storage alloys for hybrid vehicles had a negative impact on sales, but raw material costs were reduced due to the devaluation of book value by inventory valuation.

・Company plan for the FY2021/12 is not stated as it is not possible to make a reasonable calculation/forecast at this time.  Sales of ferroalloys are expected to increase in line with the increase in domestic crude steel production, and contract manufacturing of battery materials from Sumitomo Metal Mining (5713) is expected to grow in line with the spread of electric vehicles (EVs).  As for hydrogen transport technology, which is promising as a decarbonized energy source, hydrogen storage alloys, of which the company is the leading company in Japan, have the advantage when it comes to short distance transportation