“From the Perspective of Extended “Semi-emergency Coronavirus Measures”, Sports Betting and Japanese Stocks”

On 9/2, in response to the spread of infection of the COVID-19 Omicron variant, the Japanese government extended the deadline for the “semi-emergency coronavirus measures” for 13 prefectures such as Tokyo to 6/3, which was also additionally applied to Kochi prefecture. Although up to last year, in response to news such as this, the Japanese stock market had a strong tendency of being sold from concerns on the negative impact on the Japanese economy and delays in the normalisation of economy, the current situation appears different. Against the backdrop of difficulties in further significant sale in the supply and demand aspect, such as the unsettled buying balance of arbitrage and unsettled selling balance of arbitrage of the Nikkei average shifting to low levels, firstly, we can consider one of the factors for it to be that the prefectures are fully cooperating with F&B outlets, etc. on the call for cooperation on rules, such as on reduced operational hours and the provision of alcoholic beverages, etc., and risks of bankruptcy are being reduced due to the provision of assistance funding to business operators that meet the provision criteria. This is why business operators are somewhat able to accept the semi-emergency coronavirus measures and declarations of a state of emergency, etc.

Next, in the U.S., as of 8/2, the number of COVID-19 infections on a 7-day moving average fell to under 1/3 of the level of the peak in mid-January. With state after state removing the mandate for masks to be worn in schools and outdoors, another factor that can be considered is that travel and leisure-related stocks are being bought. This is why in Japanese stocks as well, enterprises that run F&B outlets, izakayas, karaokes and amusement parks, etc. and enterprises that easily benefit from increased travel and leisure, such as public transport and the air transport industry, also tended to have an influx of anticipated purchases. While there are mitigated risks in terms of business performance due to benefits and subsidies from the government, perhaps there is room to consider investment in stocks that will benefit from the resumption of the economy.

With the growing tendency of trends in stocks to buy in the U.S. stock market reflecting in Japanese stocks as well, from the perspective of Japanese stock investment, there is also an increasing need to observe trends in U.S. stocks. In the U.S., since the decision by the Supreme Court of the United States to leave the decision on the legalisation of sports betting (gambling) to each state in 2018, in January this year, New York was the 18th state in the U.S. to officially approve it. Voting on its legalisation in California, which has the largest population in the U.S., is expected to take place next year as well. Professional American football NFL is also designating their official betting partner. The “Superbowl” held on 13/2 is also a subject of betting and will likely be more hyped than previous years. Also, enterprises conducting sports commentary data and analysis services will also likely be promising.

In Japan as well, there has been an emergence of enterprises, such as mixi (2121), that focus their efforts on the platform management of national bicycle race and auto race ticket betting. The company’s proactive efforts, such as the acquisition of local 5G radio communication system licenses for the purpose of broadcasting exciting footage from bicycle race events, have gone beyond even U.S. online casino enterprises and is garnering attention. 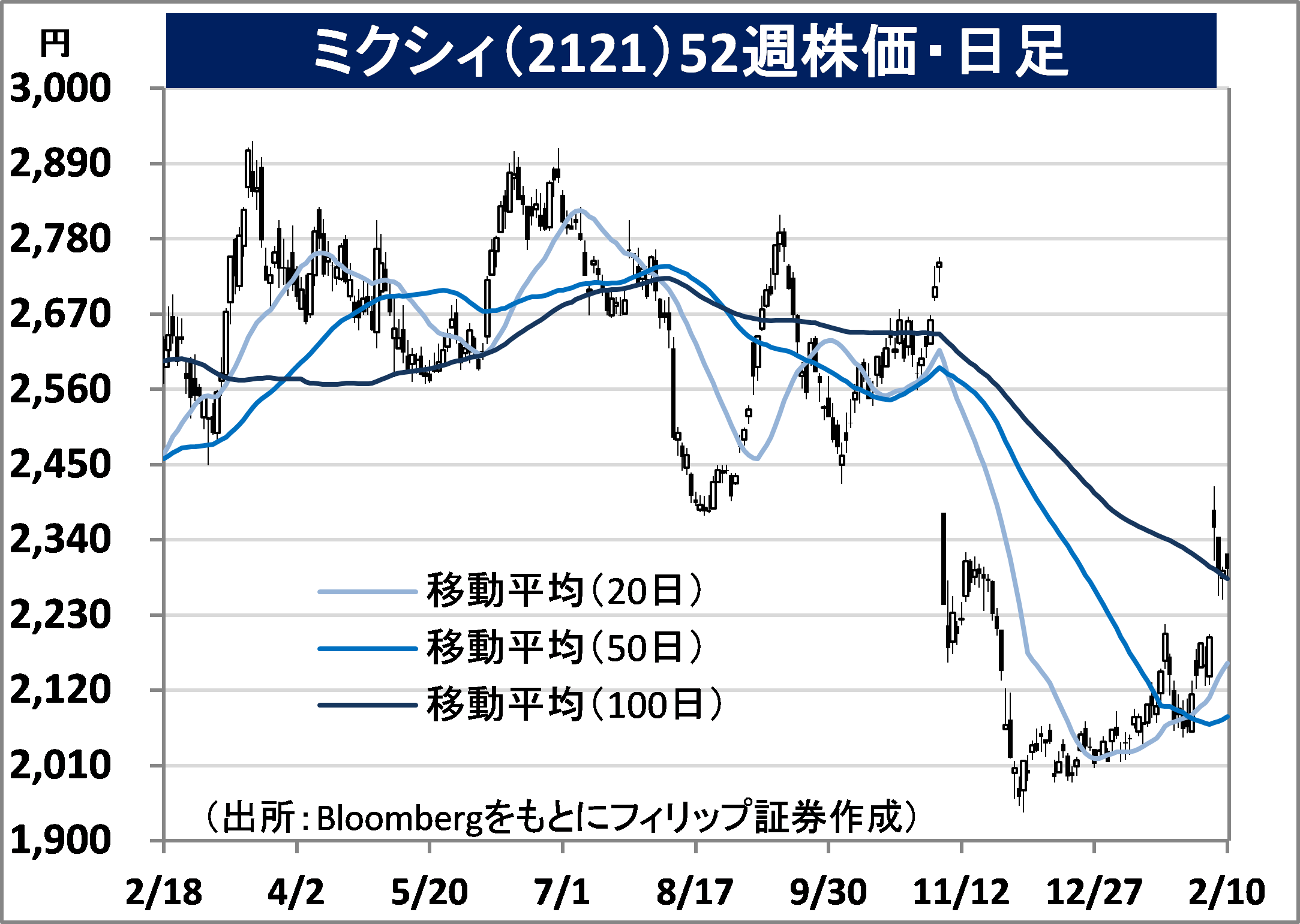 ・Operates the social media service “mixi” after its establishment in 1996. Has been offering the “Monster Strike” mobile game since 2013. Operates the digital entertainment business, sports business and lifestyle business.

・For 9M (Apr-Dec) results of FY2022/3 announced on 4/2, net sales decreased by 7.6% to 81.089 billion yen compared to the same period the previous year and EBITDA decreased by 33.9% to 12.289 billion yen. Despite their mainstay digital entertainment business being sluggish, the sports business involving sports entertainment and national games had a 45% increase in revenue and the lifestyle business that involves image and video sharing apps, etc. had a 43% increase in revenue.

・Company revised its full year plan upwards. Net sales is expected to decrease by 6.1-3.1% to 112-115 billion yen compared to the previous year (original plan 105-110 billion yen) and EBITDA to decrease by 48.4-44.7% to 14-15 billion yen (original plan 6-9 billion yen). They are expecting cost reduction in their sports business by increasing marketing strategy efficiency in the app “TIPSTAR”, which has 365-day live videos, etc., as well as bicycle racing, the new bicycle race PIST6 and auto race online betting for smartphones which are being rolled out in partnership with JKA. 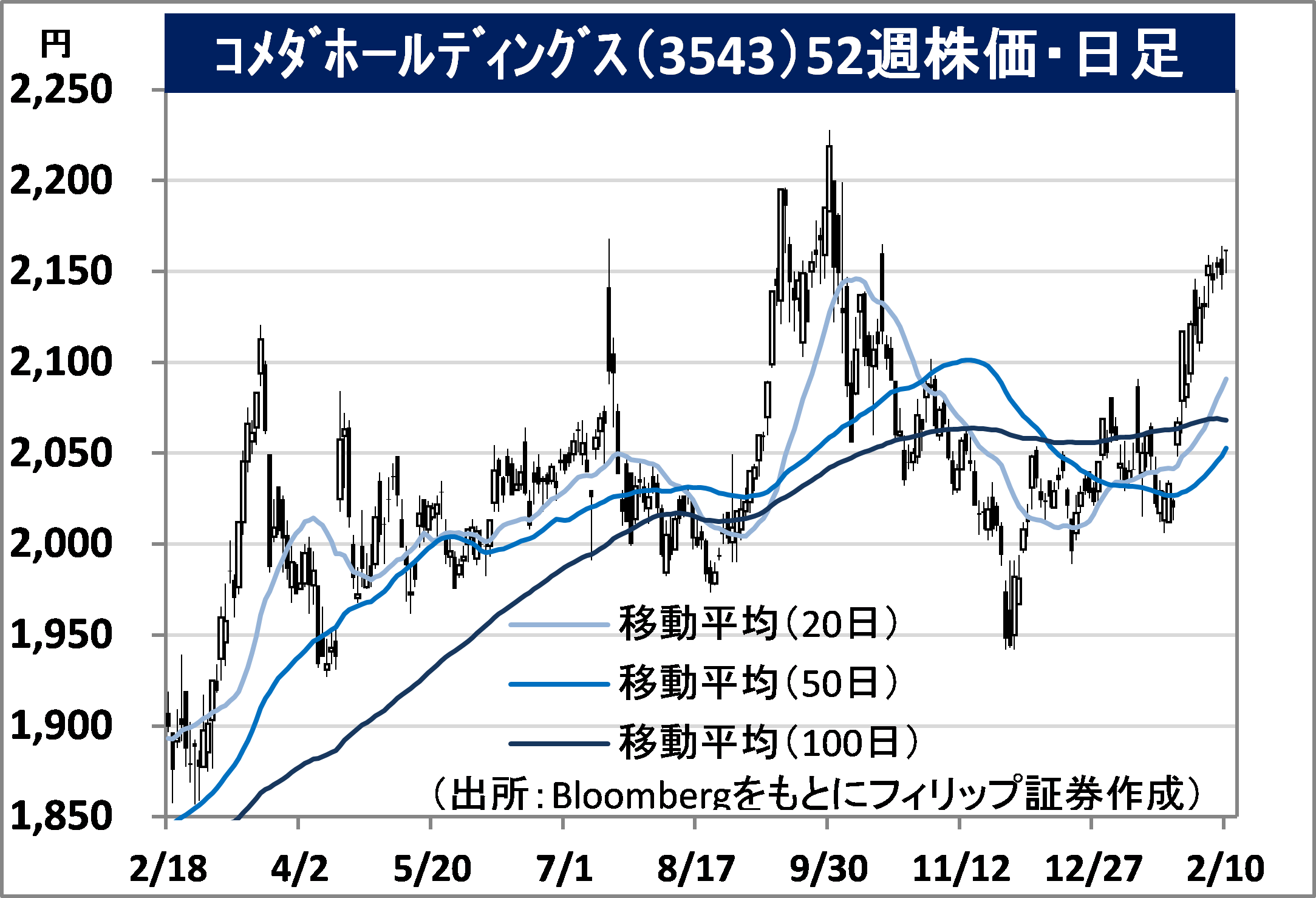 ・Began in 1968 as a coffee shop that opened in Nagoya. Expands a franchise chain business across Japan and owns brands such as “Komeda Coffee Shop”, “Okagean”, “Soft & White Coppe-pan”, “Komeda Stand” and “Bakery Ademok”.

・For its full year plan, sales revenue is expected to increase by 14.2% to 32.9 billion yen compared to the previous year and operating income to increase by 31.6% to 7.25 billion yen. According to Tokyo Shoko Research, the number of corporate bankruptcies in 2021 was the lowest in the past 50 years which was contributed by financial support from the government, however, the number of coffee shops that went out of business has hit a record high. The company is attempting to accelerate expansion of their market share. They have a stable supply of coffee beans from their capital and business partner, the Singaporean agricultural produce trading company, Olam, under Mitsubishi Corporation (8058).