Japan-Weekly Strategy Report From Summer to Autumn – What Will Happen to Japanese Stocks During the Oct-Dec Period? October 1, 2019 534 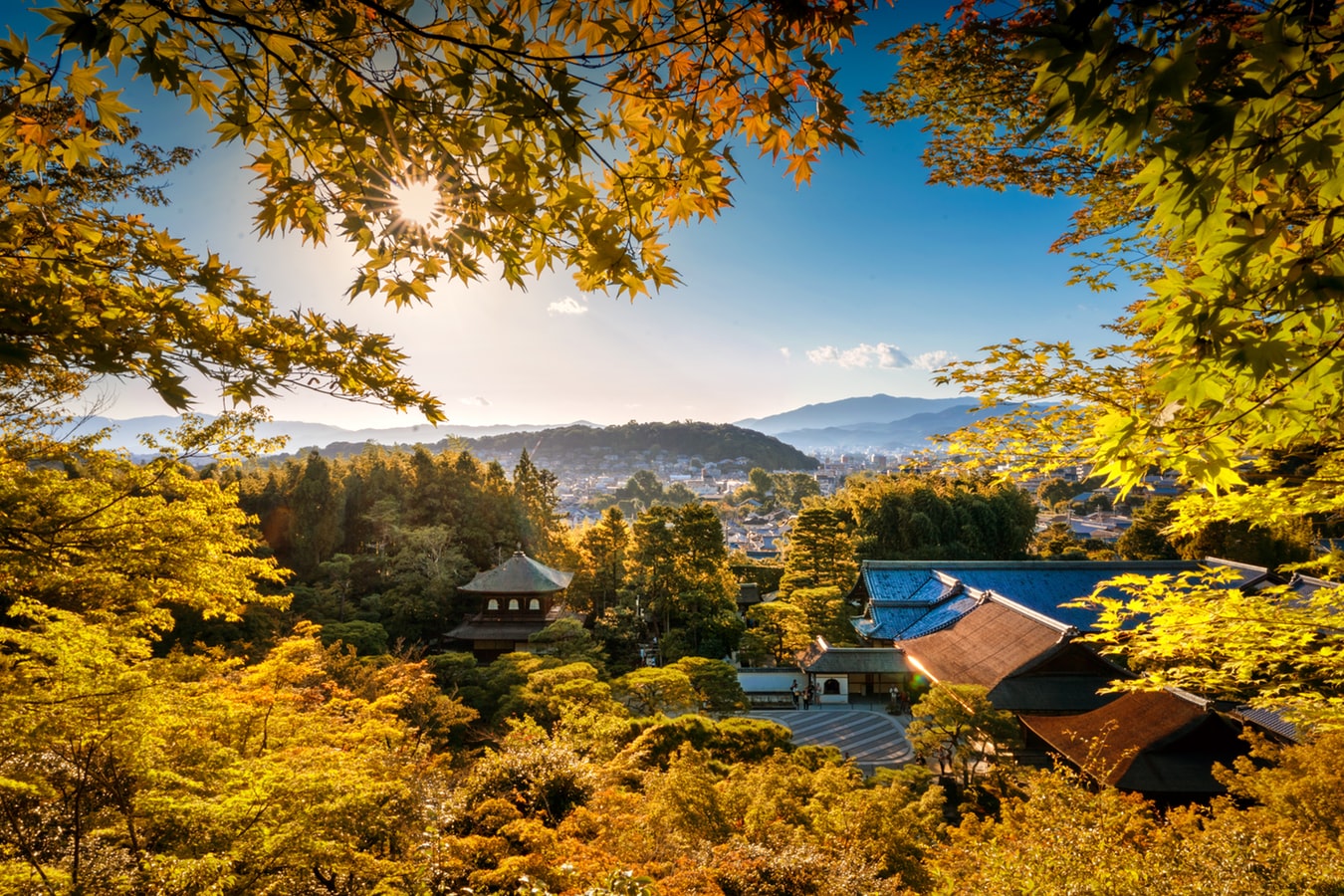 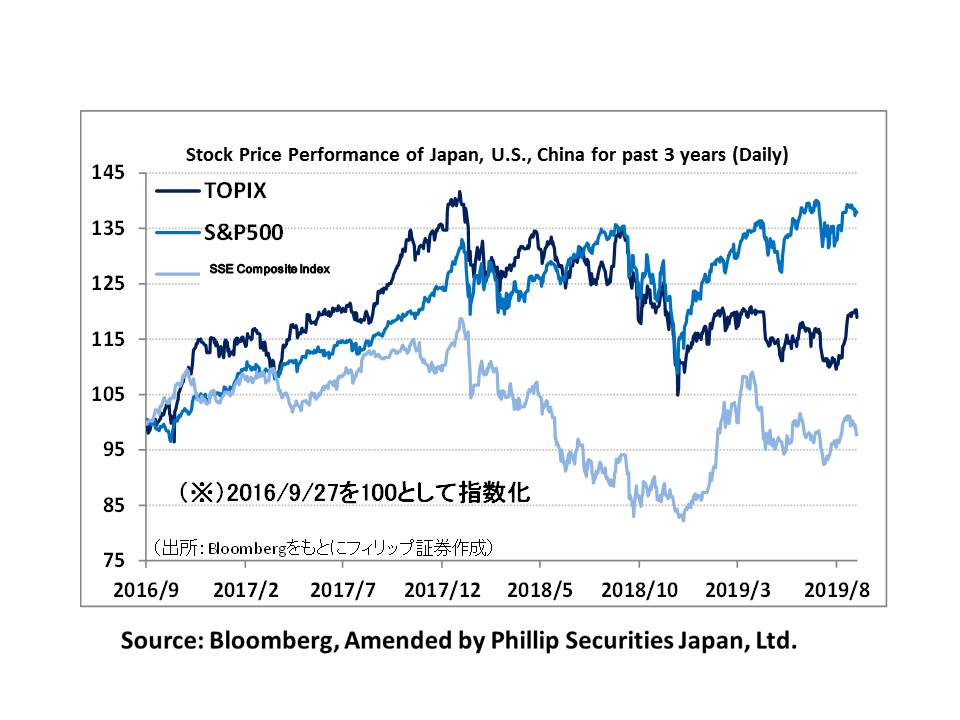 From Summer to Autumn – What Will Happen to Japanese Stocks During the Oct-Dec Period?

The Japanese stock market for the week of 24/9 was buoyed by reaction buying when the Nikkei Average dipped below 22,000 points on 25/9, in the midst of buying activities as the final day of dividend rights, 26/9, approached. However, on 27/9, the ex-rights date, the Nikkei Average dropped to the 21,700 points level, which is lower than the ex-dividend amount.  As a result of active trading, the Nikkei Average began to rise after 5/9 and exceeded 22,000 points in a short period.  The market was therefore perhaps timing for a “healthy dip”.  Buying demand through rights acquisition is expected to subside, but the market is expected to be supported by reinvestment purchases and the consumption of NISA’s tax-exempt amount of 1.2 million yen per year.

The US-Japan Summit was held on 25/9, with confirmation of a final agreement on the US-Japan trade agreement. It will be good news for the automobile industry, which is positioned as the mainstay of Japan’s export industry, as it is expected to avoid additional vehicle tariffs. In addition, reductions in tariffs on US beef, pork, wine, etc., will benefit Japanese consumers who are preparing for the increase in consumption tax, and have the effect of supporting personal consumption within the Japanese economy.

The Japanese stock market is currently strong, but the following risks might arise during the Oct-Dec quarter. Firstly, the Democratic Party’s promising candidates are being narrowed down ahead of the US presidential election a year later in 2020. In particular, Senator Warren is known to be anti-Wall Street, and has been actively pushing for the breakup of “GAFA” companies which are representative US stocks. She can therefore be a strong adversary not only for President Trump, but also for the stock market. In addition, steps are being taken to reduce credit lines for Softbank Group’s (9984) Vision Fund in connection with the postponement of US We Company’s IPO.  In this regard, the market has begun to scrutinize this IPO closely, and there is concern about the company’s stock price, which is a major contributor to the Nikkei Average.  On the other hand, depending on the additional monetary easing measures to be adopted by the BOJ, there may be a shift to high dividend  yield and low PBR stocks with lower risks on dividend reductions, along with debates on account maintenance fees for bank deposits.

Recent activities are mainly game-related. As a smartphone location game, “Dragon Quest Walk” is becoming a hit since “Pokemon GO”. Nintendo Switch’s “Ring Fit Adventure”, scheduled to be released on 18/10, is expected to surpass Wii-Fit, the previous hit product. Furthermore, it should also be noted that interest in “Item Assets” in “Blockchain Games” related to crypto assets has also been increasing. 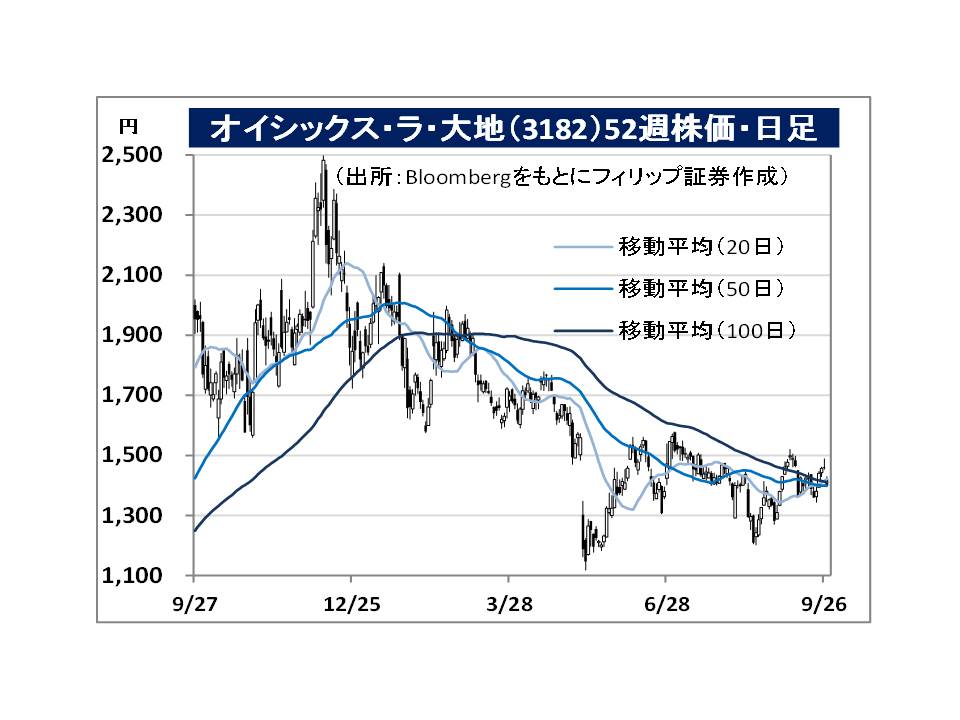 ・Established in 1997. Receives orders through websites and catalogs, and develops business delivering food (vegetables, processed foods, and meal kits), daily necessities and miscellaneous goods. Has a Solutions Business catering to the food EC business sector, and a Store Business developing a dedicated “Shop in Shop” concept at its own stores and supermarkets in other companies.

・For its full year plan, net sales is expected to increase by 9.3% to 70.0 billion yen compared to the previous year, operating income to decrease by 4.9% to 2.2 billion yen, and current income to decrease by 58.1% to 1.0 billion yen.  Company’s meal kits have been gaining support mainly from child-raising families because it can produce multiple items in 10-20 minutes. As a result of the impending consumption tax hike, company may capture households curbing eating outs. 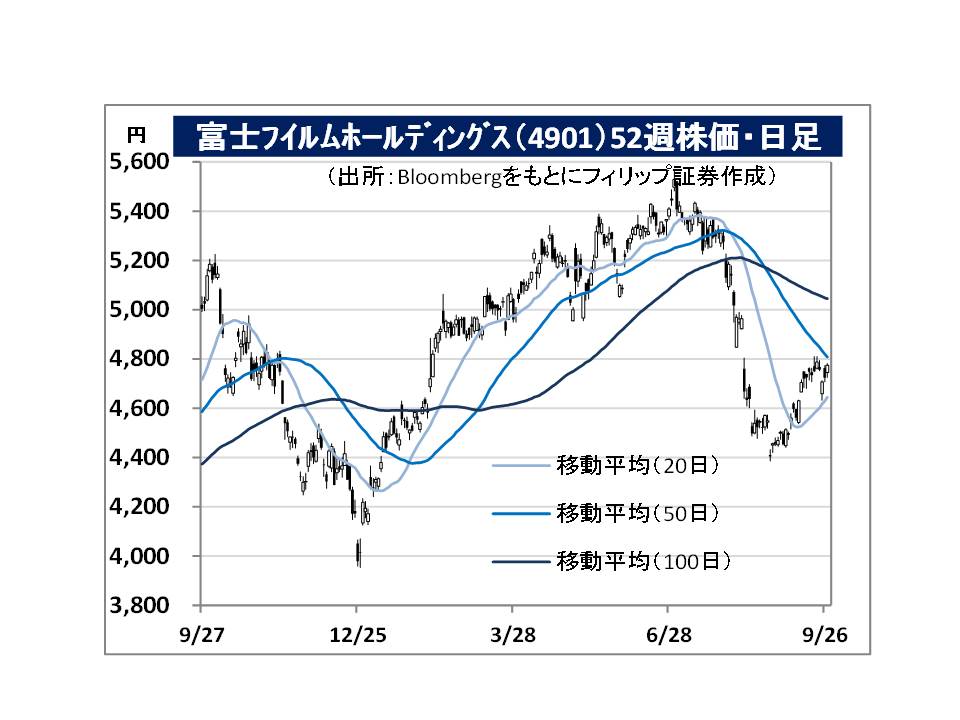 ・Established in 1934 when Dainippon Celluloid’s (current Daicel) photographic film business was separated. A holding company with Fuji Film and Fuji Xerox under its umbrella. Developing the Imaging Solutions, Healthcare & Material Solutions and Document Solutions businesses based on fundamental technologies cultivated through its silver halide photography knowhow.

・For 1Q (Apr-June) results of FY2020/3 announced on 8/8, net sales decreased by 5.2% to 535.326 billion yen compared to the same period the previous year, operating income increased by 0.7% to 37.113 billion yen, and net income decreased by 48.2% to 14.662 billion yen. Medical systems and regenerative medicine sector grew, and the profitability of the Document Solutions business had improved. Net income decreased due to loss on valuation of equity securities.