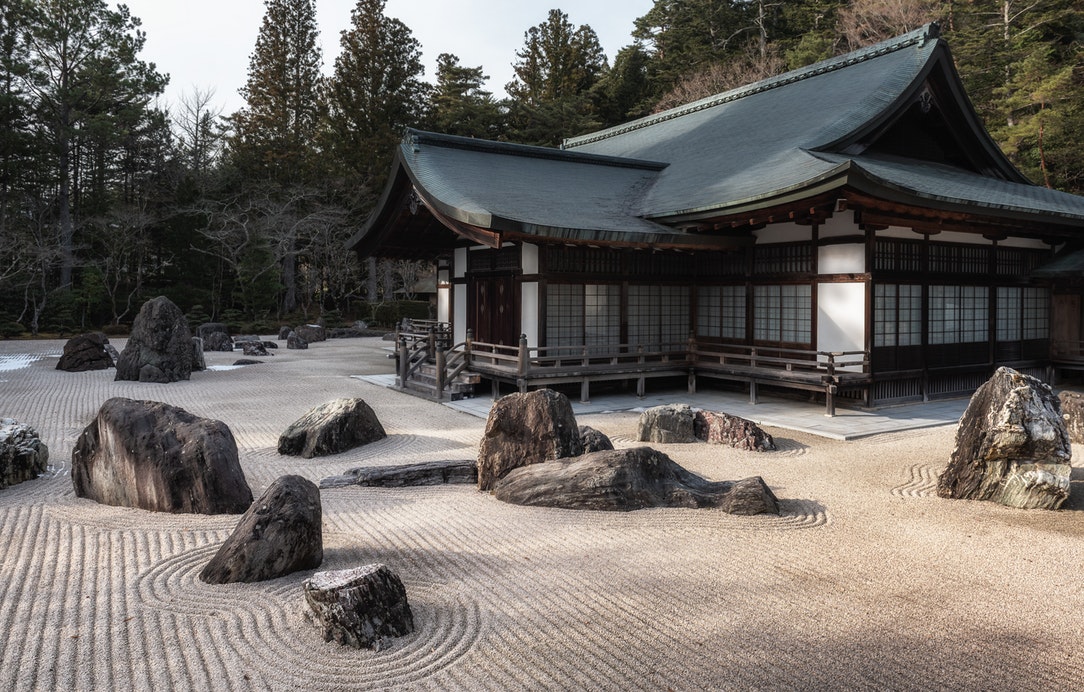 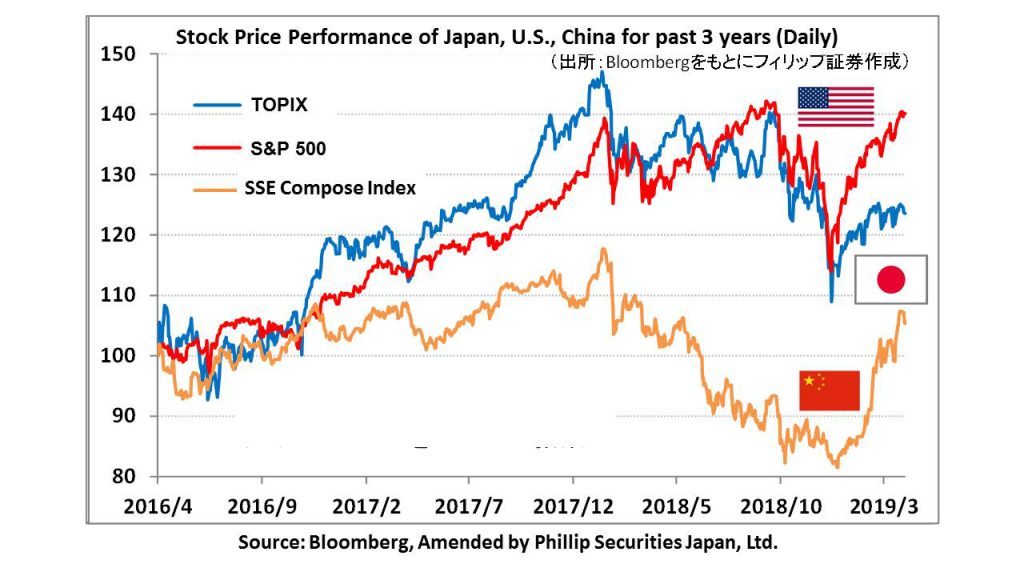 Steady movements were observed at the U.S. economy with the “market at an optimum state”, such the U.S. Bureau of Labor Statistics’ nonfarm payroll employment for March on 5/4 exceeding market expectations, and the slowdown in growth of average hourly earnings from last month, etc., which led the Nikkei average to mark 21,900 points on 8/4. Although on 9/4, there was the announcement by Aso, the Minister of Finance, of the issuance of new bank notes from 2024, it failed to make a sustainable impact on the stock market with overwhelming expectations of “cashless payments”. In overseas markets, due to the cut (3.5%→3.3%) in growth of the 2019 World Economic Outlook by the IMF on 9/4, the market is weakening centring on stocks with high overseas sales ratio, which also caused the Nikkei average to drop to 21,571 points.

The faces elected for the new bank notes are Eiichi Shibusawa, Umeko Tsuda, and Shibasaburo Kitasato. It was an election drawn from finance, education and medical-related fields. For the medical field, although results of the growth strategy are beginning to surface, for the finance field, a growth strategy that looks into the future to lessen the dimensional gap at the Bank of Japan is needed. Eiichi Shibusawa contributed by laying the foundation for Japanese banks and the currency system after the Meiji Restoration, where he strived to establish the “National Bank Act” in 1872 in order to stabilise the value of currency through the use of convertible paper currency, and after which, he made fervent efforts towards the nationwide appeal for investment of the bank from nobles and descendents of the samurai, etc. He was certainly an apt person to have been chosen as the “face of finance”.

On 7/4, both the prefectural governer and the mayor won the Osaka double election at the Osaka Restoration Association. Although there are expectations of a “redevelopment of Yumeshima” towards the Osaka Expo in 2025, however, there is a need to pay attention from the viewpoint of preparing backup capital functions in terms of attraction to the integrated resort (IR) and “national resilence”. In particular, for Japan’s IR, interest has been indicated from overseas as well, such as from Genting Singapore. The new construction of Nintendo (7974)’s Mario Area within the company’s IR, Universal Studios Singapore, was announced, which has been gathering anticipation for its killer contents for IR. USJ is also scheduled to take part in the same area in Japan in 2020, and we can expect it to contribute to the rise in foreign visitors to Osaka.

On the other hand, for stocks with high dividend yields, there has been a prominent sale of stocks that have secured ex-rights of their year-end dividends. There is a possibility of profit creation at the beginning of the term by instutitional investors, and the adjustment of positions before the 10-day holiday, as well as concerns of a risk in decreased dividends for this term (FY2020/3) before the announcement of financial results. Looking at the trend of strengthening returns to stockholders of Japanese corporations, we can foresee an increase in high dividend yield stocks and a possibility of the same phenomenon diffusing after ex-rights of dividends in the future as well. It might be a good opportunity to invest when there is a fall in high dividend yield stocks that are predicted to have lower risk of dividend reductions. 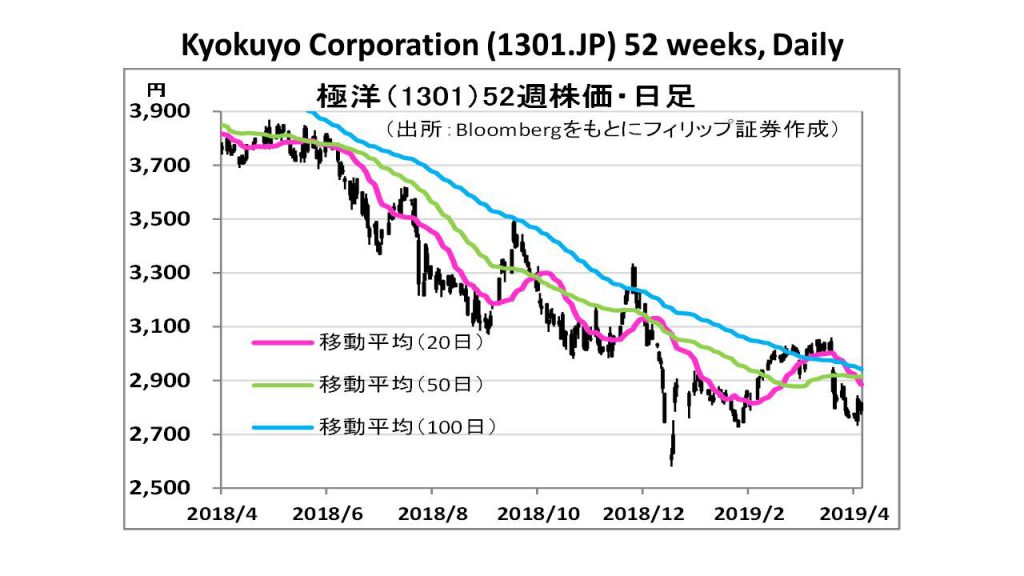 ・For its full year plan, net sales is expected to increase by 4.8% to 267 billion yen compared to the same period the previous year, operating income to increase by 18.0% to 4.8 billion yen, and net income to decrease by 0.3% to 3.2 billion yen. The canned mackerel craze caused a supply shortage, which led the company to impose a 10% price hike from 1/3. Of the 274.9 billion yen (targeted 350 billion yen in 2019) of Japan’s marine products export for 2017, mackerel accounts for 8.0% (21.9 billion yen). There is a growing demand for mackerel as an ingredient in African countries, and we can forsee increased pressure towards price hikes for canned mackerel. 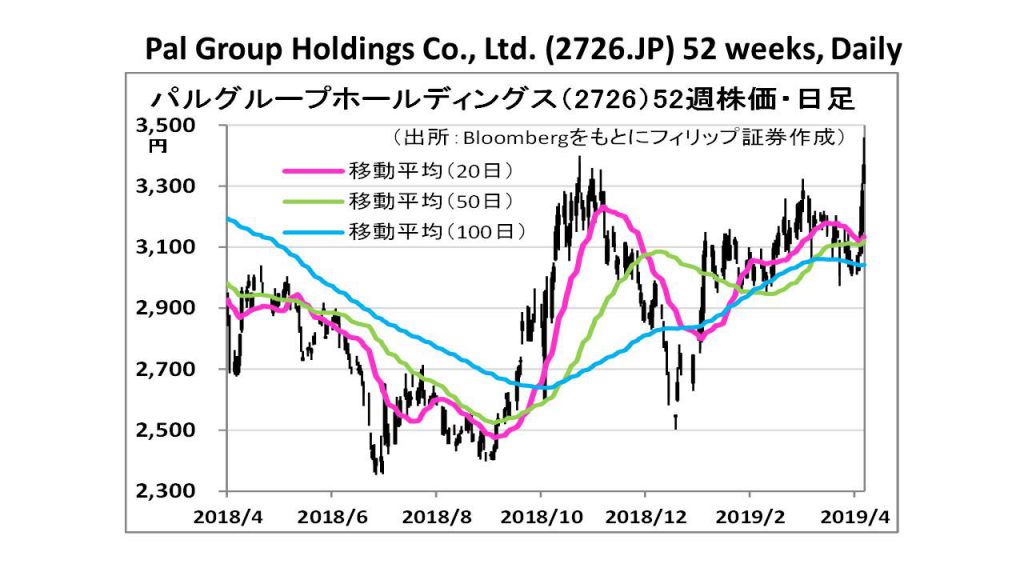 ・Established in 1973 from a separation of a casuals department for tweed clothing. Centring on apparel brands that have consumers in their twenties as their core target, the company expands a wide range of businesses such as fashion goods and household goods, etc. Main brands include “Kastane”, “CIAOPANIC”, “3COINS”, “GALLARDAGALANTE”, “russet”, and ”PAPILLONNER”, etc.