Japan-Weekly Strategy Report ”Focus on the COVID-19 Catastrophe Shifting to Nursing Care and the Start of the Political Market” September 3, 2020 131 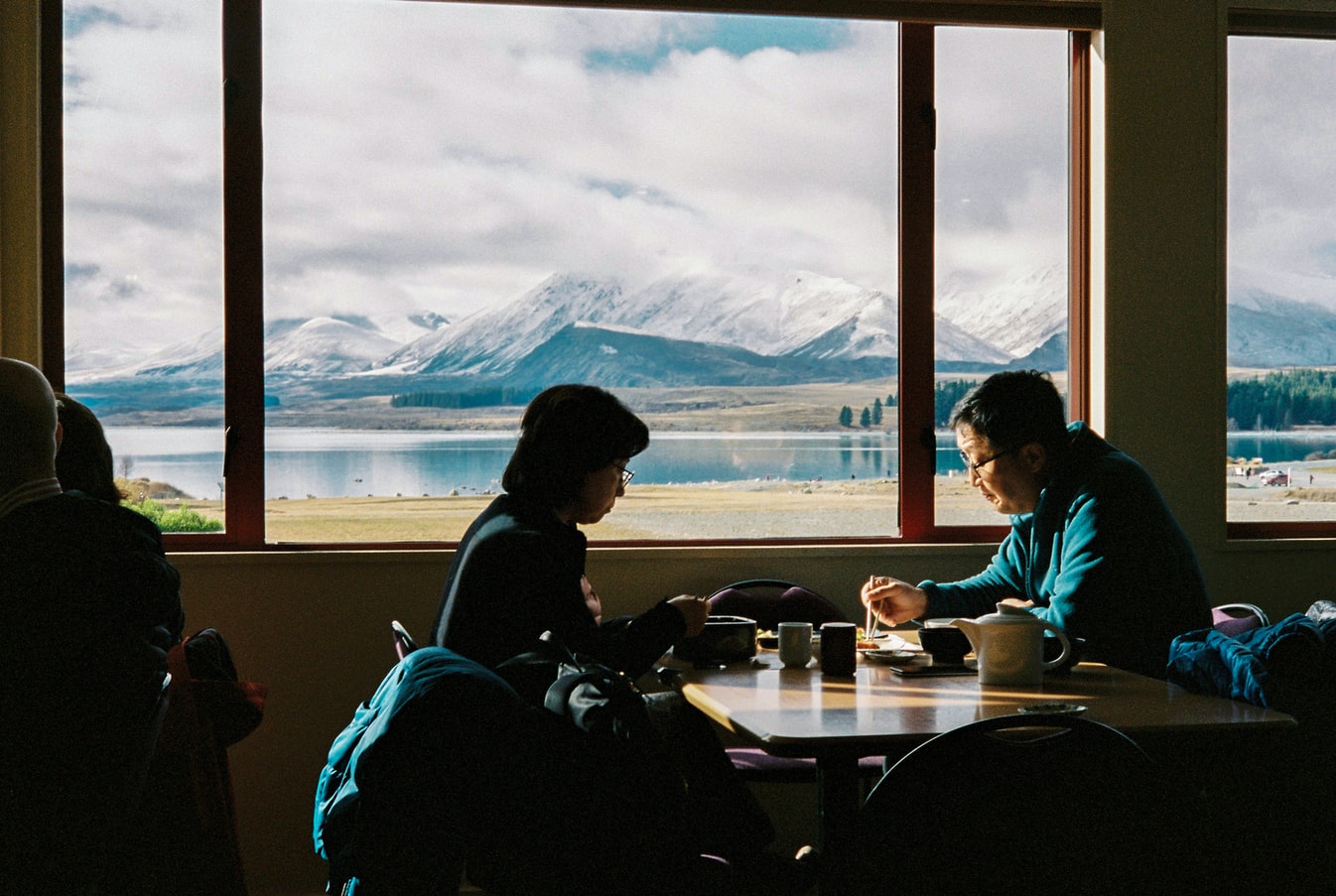 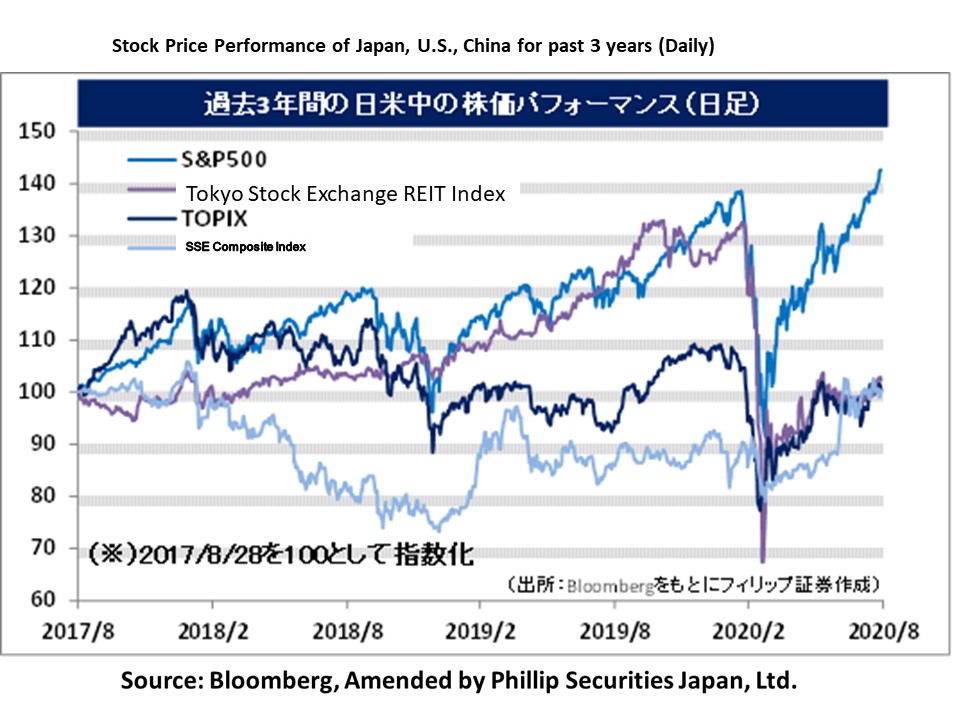 At past 2pm on the 28th, there was a news flash regarding Prime Minister Abe confirming his intention to resign due to health problems, which caused the Nikkei average to instantaneously fall to 22,594 points during trading hours, down 614 points from the previous day’s closing price. As mentioned in our 17th Aug 2020 issue of our weekly report, “A Political Situation Starting to Stir and Economic Measures That Are Required”, it seems that the political market has begun.

Firstly, having anticipated the expiry of the current party officers’ term of office at end September next month, with the high possibility of Prime Minister Abe / the Liberal Democratic Party President beginning a Cabinet reshuffle and personnel affairs of the party officers in September next month, the Prime Minister’s resignation has made it difficult to predict future prospects. From the perspective together with Japanese stock investment, in order to handle the international situation intensified by the U.S-China friction, attention is on whether the Japanese government will display a clearer anti-China stance by strengthening their relations with the U.S., such as via the next key Cabinet posts and the party’s personnel affairs involving the secretary general, etc. With regard to 5G communication, under the increasing global situation on the exclusion of China’s Huawei led by the U.S., there is a possibility of it turning out to be an opportunity for the old NTT Family, such as Fujitsu (6702) and NEC (6701), who formed a capital business partnership with NTT (9432), to strengthen their overseas presence involving those related to next-gen 5G communication networks.

Next, Prime Minister Abe plans to announce the COVID-19 countermeasures package from 5pm today on the 28th, which is said to include the implementation of regular simultaneous testing for all staff from healthcare institutions and elderly facilities in regions experiencing a spread of the infection. With the likely increase in burden on nursing care staff in facilities supporting the elderly, whom are viewed as having high risks of the infection worsening, final stages on the debate regarding the revision to nursing care wages in 2021, which are revised every 3 years, have begun from this summer. Amongst those, attention is on nursing care robots, which would help alleviate burden on staff

by supplementing the lack of on-site manpower, and the Ministry of Health, Labour and Welfare has begun deliberations on whether to include nursing care robots, such as the “Power Assistant Suit”, etc., as those applicable under the public insurance scheme. Also, in the U.S., the Democratic presidential nominee, Joe Biden, announced an economic measure which would implement an investment expenditure equivalent to 83 trillion yen on childcare and nursing care over a span of 10 years. It is likely that the alleviation of the burden of elderly nursing care would be viewed as an important issue worldwide. 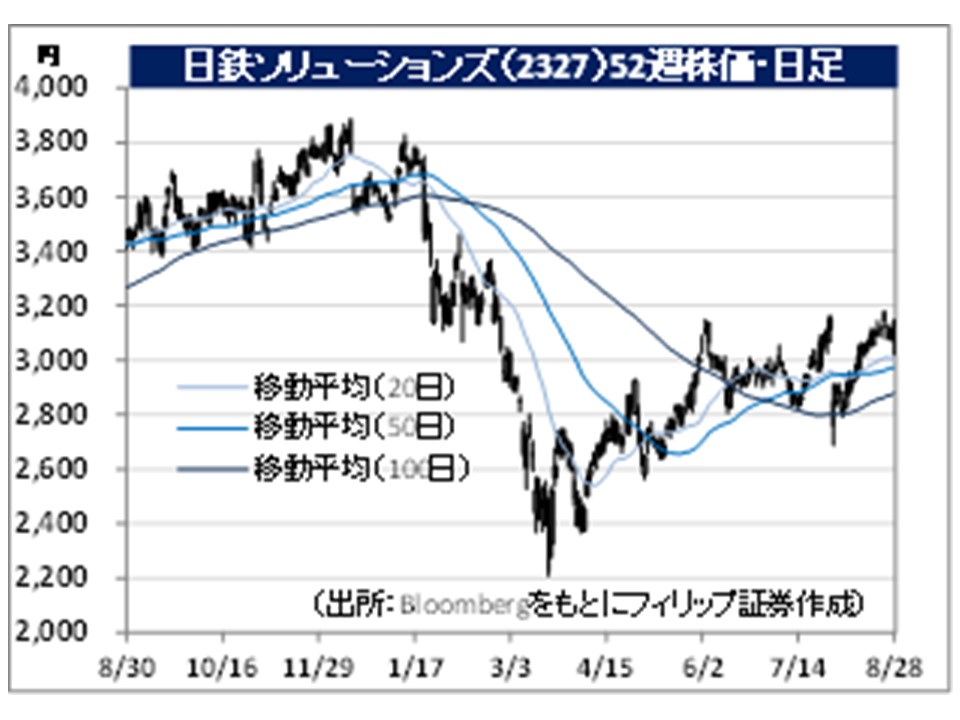 NS Solutions Corporation (2327) 3,070 yen (28/8 closing price) ・Established in 1980 with Nippon Steel Corporation as their parent company. Although they are the system integrator for the Nippon Steel (5401) Group, approx. 80% of net sales is accounted by system development and consulting for government agencies and corporations other than their parent company. ・For 1Q (Apr-Jun) results of FY2020/3 announced on 30/7, net sales decreased by 17.4% to 56.644 billion yen compared to the same period the previous year and operating income decreased by 26.1% to 5.102 billion yen. Despite continuous IT projects for clients which are supported by telecommuting and efforts towards a digital reform, the reactionary decrease in large-scale infrastructure projects for central government agencies recorded in the same period the previous year has led to a decrease in sales and income. ・For its full year plan, net sales is expected to decrease by 7.2% to 255 billion yen compared to the previous year and operating income to decrease by 15.8% to 23.9 billion yen. Digital reform (DX) support for clients anticipated “after COVID-19” and a business structure reform in the Nippon Steel Group which will serve to support the IT system aspect, etc. are likely to increase the importance of the company. Due to the call to increase the corporate group’s ROE and the circumstance of parent company in wanting to retain profits within the corporate organisation, there will also likely be attention on movements involving a revision to parent-subsidiary listing. 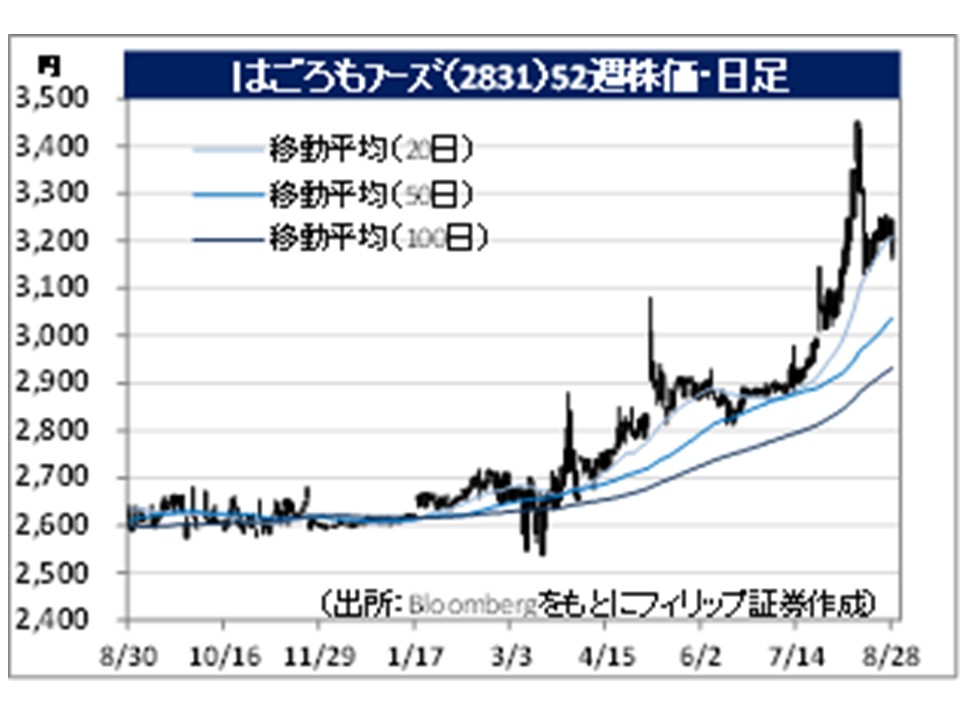 Hagoromo Foods Corporation (2831) 3,170 yen (28/8 closing price) ・Established in 1947 after its canned tuna in oil business was founded in 1931. Registered a trademark for its product name, “Sea Chicken”, in 1958. Handles a foodstuff business carrying out the manufacture and retail of canned products, pasta, cooked rice packs, dried bonito shavings and laver, etc. ・For 1Q (Apr-Jun) results of FY2021/3 announced on 13/8, net sales increased by 0.8% to 21.136 billion yen compared to the same period the previous year and operating income increased by 79.3% to 1.26 billion yen. The increase in demand for canned and pasta products for the household due to the closure of schools and the voluntary restraint in going outdoors, etc. following the COVID-19 catastrophe, the stabilisation of prices of main raw materials and a decrease in general administrative expenses, etc. have contributed to a revenue increase and an operating income increase. ・For its full year plan, due to the cycle of household demand for their mainstay canned and pasta products as a result of the COVID-19 catastrophe, net sales is expected to decrease by 1.0% to 82 billion yen compared to the previous year and operating income to decrease by 5.5% to 2.9 billion yen. With a predicted increase in demand for dieting and a prevention of lifestylerelated diseases following the increase in time spent indoors, etc., in addition to the non-oil Sea Chicken, the company is reinforcing health-conscious low-carb product expansion, which will likely provide plenty of room for sustained growth.