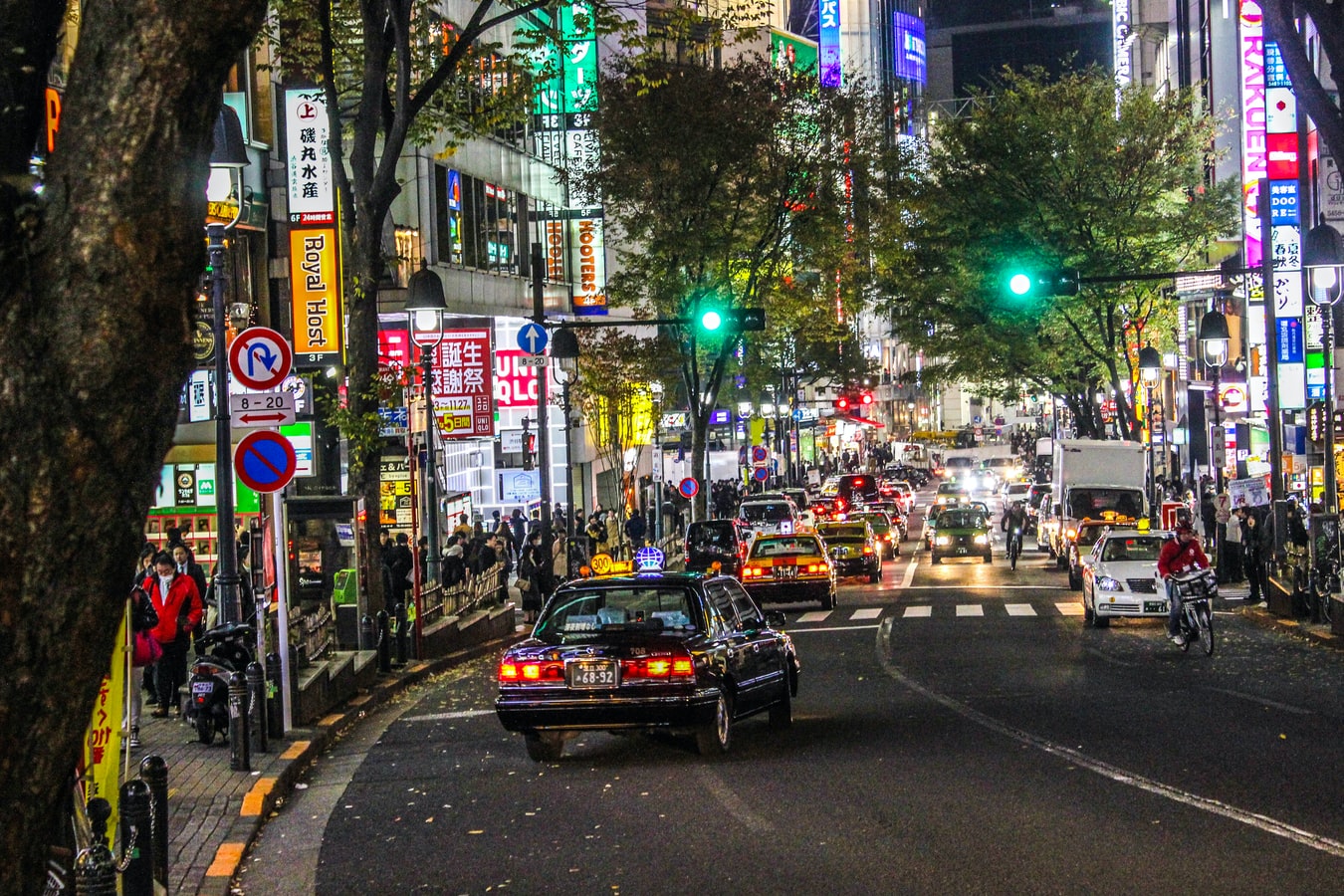 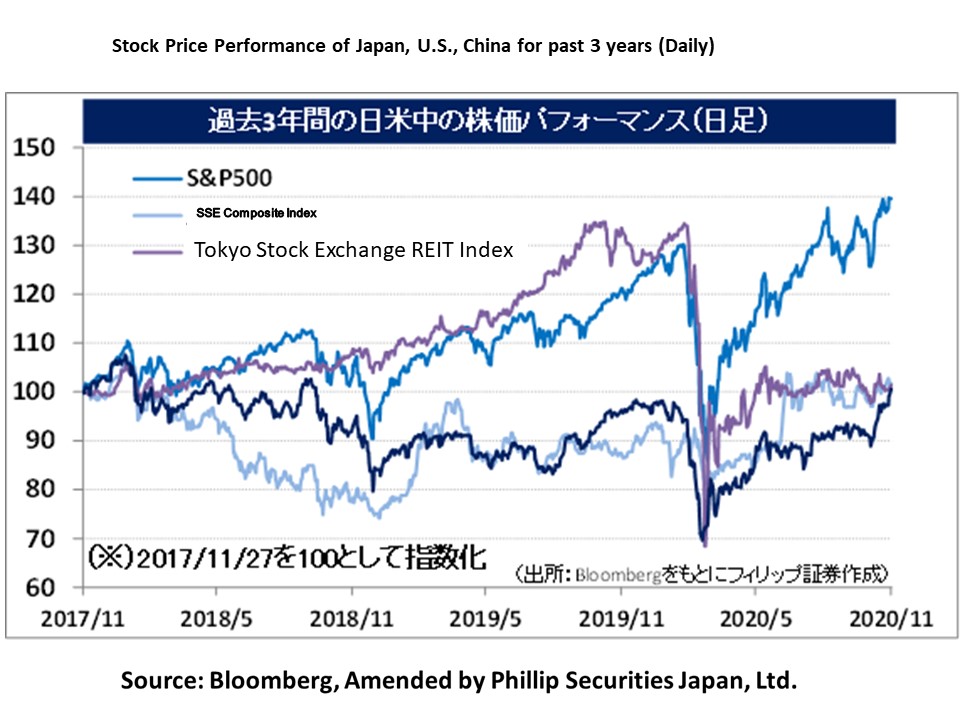 It was reported during the week of 23/11 that Democrat Joe Biden, who had secured victory in the US presidential election, will appoint former Fed Chair Janet Yellen as Treasury Secretary.   As a result, in global financial markets, stocks and interest rates rose, while the dollar weakened, with the view that the economy could be expected to rise through a strong lineup of additional fiscal stimulus, and strengthening cooperation with the Fed as the central bank which has a low interest rate policy.  The US Dollar Index, which indexes the US dollar against several major currencies, also fell below 92 points on 25/11 to its the lowest since 1/9.  The weaker dollar has pushed up prices of a wide range of commodities, including grains, non-ferrous metals and crude oil, and has helped boost the share prices of stocks, especially economically-sensitive value stocks that are susceptible to commodity markets, such as resources.

Among them, global prices of non-ferrous metals used in a wide range of industries have risen across the board.  In addition to the continued recovery of China’s economy from the Covid-19 pandemic, the election of Mr Biden, who has pledged to promote clean energy, and the push for electric vehicles (EVs) as announced by major countries to reduce greenhouse gas emissions, are believed to be the main push factors.  Apparently, the main reasons for the rise in non-ferrous metal prices are that besides using more than twice as much copper for motors and other components as gasoline-powered cars, EVs also use nickel and lead for storage batteries,  and the use of aluminum to reduce vehicle weight is also expected to increase.

On the other hand, rare earths, the raw material for high-performance magnets, are essential for products needed to reduce greenhouse gas emissions, such as EVs and wind turbine motors.  In this regard, there are concerns that China’s export control law, scheduled to take effect on 1/12, may include rare earths, in which the country has a large share of production, among its strategic commodities.  If this happens, it will cast a pall over the promotion of clean energy policies to reduce greenhouse gases.  However, the neodymium magnet, a typical high-performance magnet, was invented in 1984 by Mr Masato Sagawa of Sumitomo Special Metals (currently Hitachi Metals (5486)), and the product is now handled by Hitachi Metals, Shin-Etsu Chemical (4063), Daido Steel (5471), and TDK (6762).  It is therefore noteworthy that China’s export control regulations could be an advantage for Japan, as this is an area where Japanese companies have a global advantage.

In the US, major retail and home improvement companies such as Walmart (WMT), Home Depot (HD) and Target (TGT) have released their Aug-Oct 2020 results since 17/11.  With the growth of online shopping driving earnings, the style of ordering online and picking up at stores and parking lots (curbside) has contributed to increase in sales.  Japanese retailers with large suburban stores and parking lots will have room to improve their performance as well. 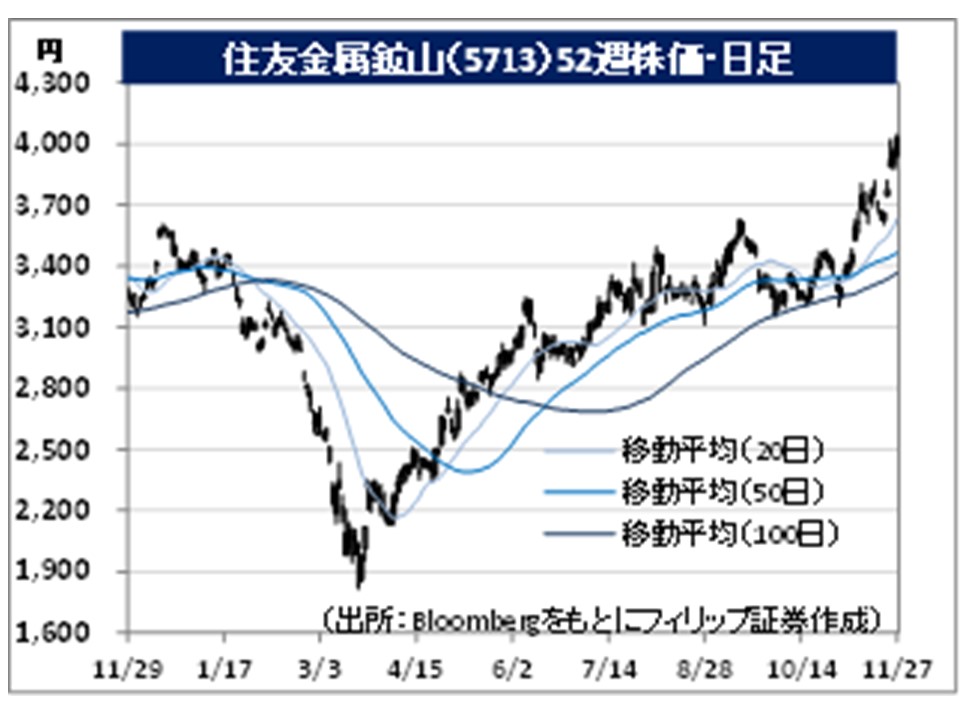 ・A non-ferrous metal company founded by the founder of the Sumitomo family (Soga Riemon) in 1590.  Operates three business segments, namely, “Resources” such as resource development, “Smelting” for metal refining and processing, and “Materials” including battery materials and functional materials.

・For 1H (Apr-Sep) results of FY2021/3 announced on 9/11, net sales decreased by 0.8% to 419.123 billion yen compared to the same period the previous year, and profit before tax decreased by 28.8% to 25.884 billion yen.  Lower sales arose due to lower copper and nickel prices, as well as a temporary production adjustment in the battery materials business.  Profitability was affected by the deterioration of equity method investment profits due to the decline in copper prices.

・For its full year plan, net sales is expected to decrease by 1.7% to 858.0 billion yen compared to the previous year, and profit before tax to decrease by 15.2% to 67.0 billion yen.  With major countries announcing plans to promote electric vehicles (EV), company is supplying most of its nickel-based lithium-ion battery materials to Panasonic (6752), as well as battery materials for hybrid vehicles to Toyota Motor (7203).  Its strength of securing procurement of nickel from mineral veins is valued. 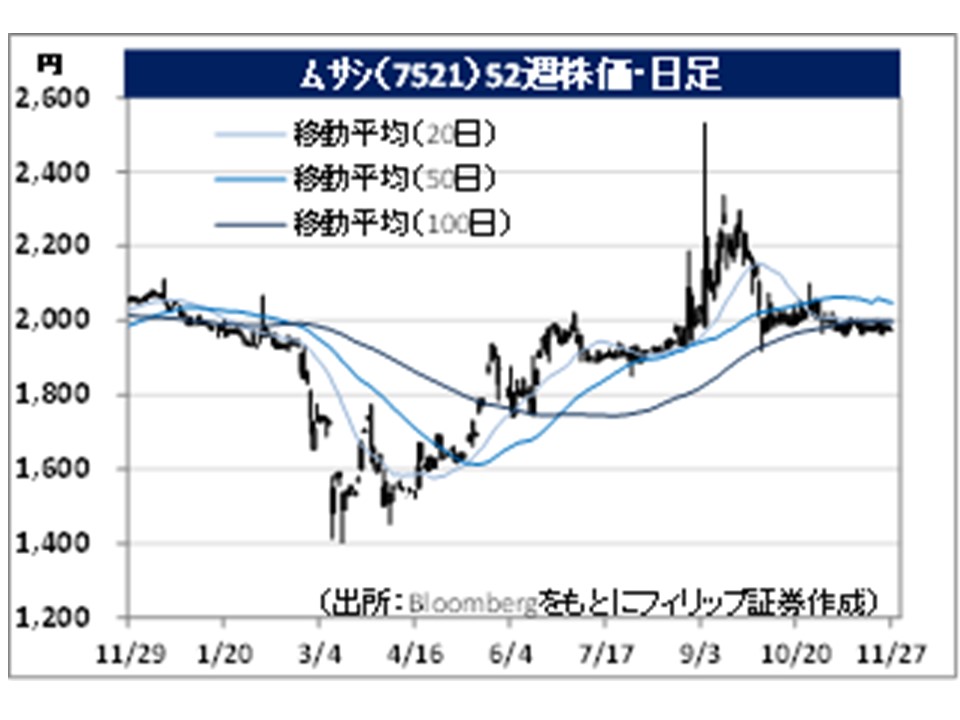 ・For 1H (Apr-Sep) results of FY2021/3 announced on 10/11, net sales decreased by 28.6% to 14.18 billion yen compared to the same period the previous year, and operating income fell into the red to minus 185 million yen from 1.127 billion yen in the same period of the previous year.  The drop in sales of cash-handling machines due to restraint in capital investment by financial institutions had impacted profits in the general-purpose financial / election systems equipment business, which accounts for the majority of operating income.

・For its full year plan, net sales is expected to decrease by 13.6% to 32.481 billion yen compared to the previous year, and operating income to decrease by 82.2% to 182 million yen.  In-house-developed election systems equipment is expected to be largely dependent on the dissolution of the House of Representatives and the holding of the general election by PM Suga.  Furthermore, with the Trump campaign’s accusation of election fraud related to vote counters and related software in the US presidential election, the global demand for election system updates may increase in order to ensure confidence in elections, which is fundamental to democracy.