Japan-Weekly Strategy Report Despite the Cheaper Price Levels, There Is a Need to Keep an Eye on the Dollar/Yen Exchange Rate June 14, 2019 488 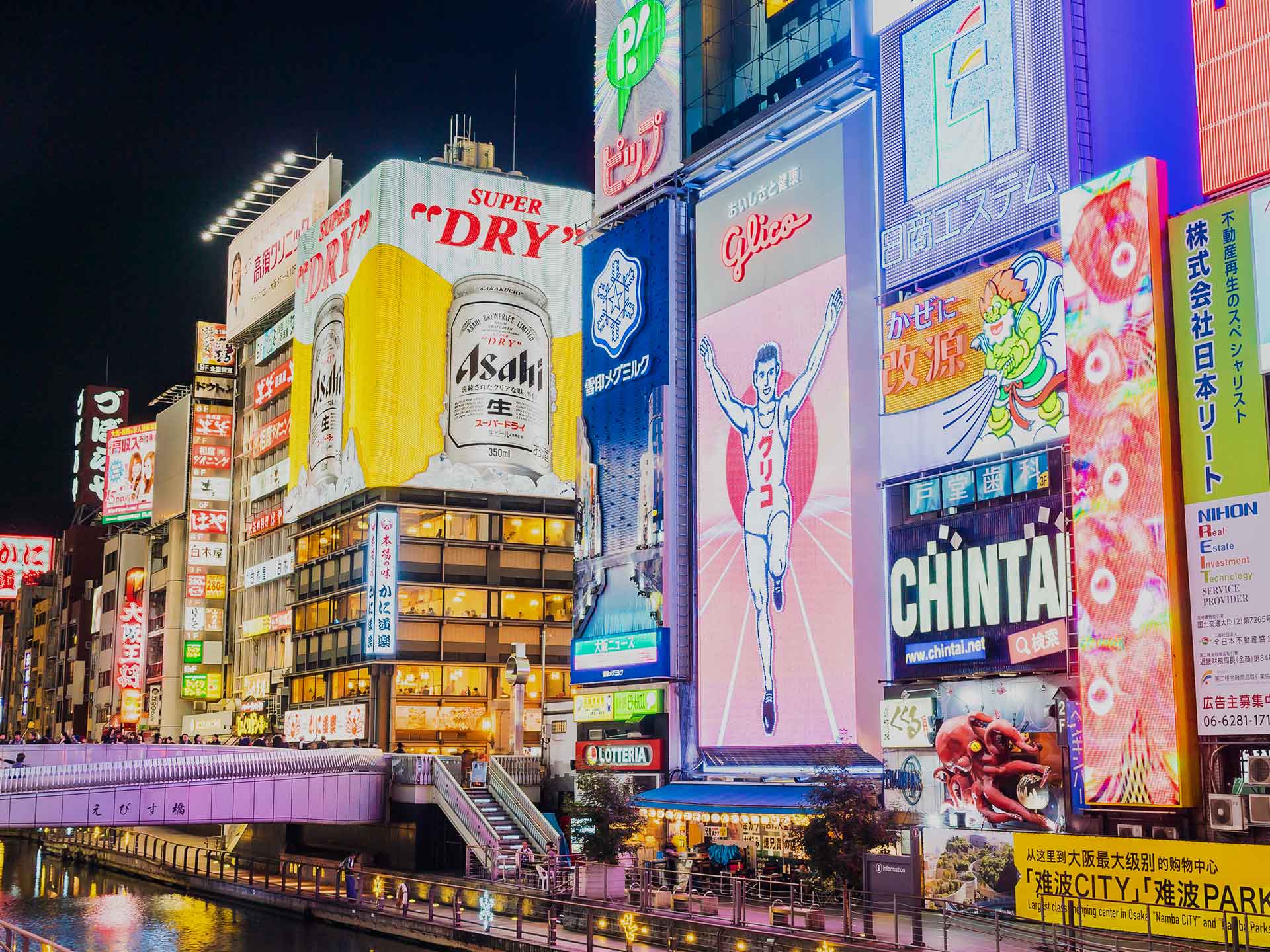 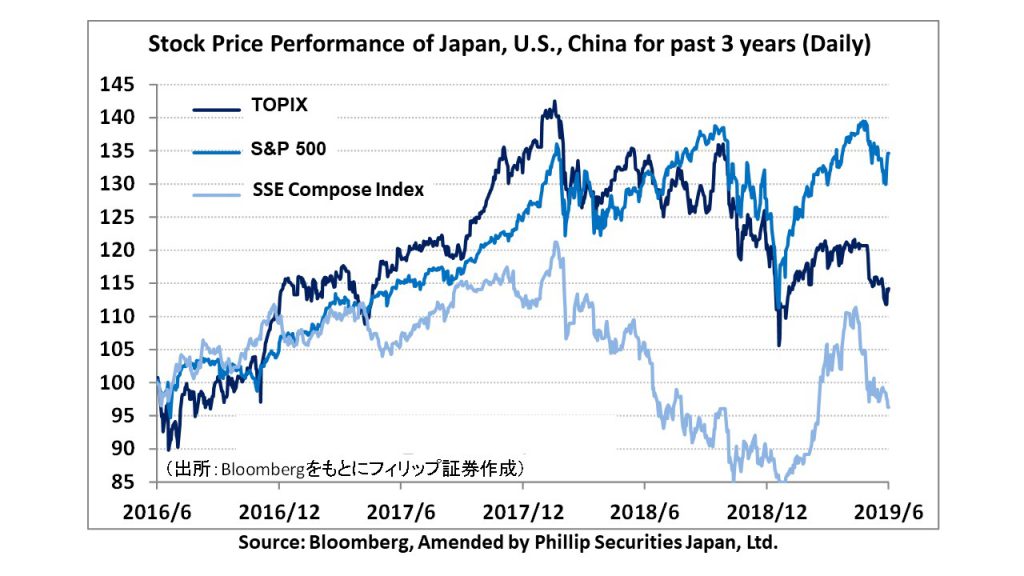 Despite the Cheaper Price Levels, There Is a Need to Keep an Eye on the Dollar/Yen Exchange Rate

The Trump administration announced on 30/5 that additional tariffs would be imposed on all imports from Mexico, which shook the global stock market, however, the disturbance continued well after the weekend, with the Nikkei average falling to 20,289 points on 4/6. Due to growing concerns of a global recession from the intensifying trade friction surrounding the US, and the 10-year government bond yield falling under 2.1% in the US bond market, the dollar/yen exchange rate fell below 108 points, which saw the yen appreciating against the dollar. Following that, due to FRB Chief Powell’s remarks on 4/6 which included, “seriously accepting risks” and “taking appropriate actions towards the target of a 2% increase in prices and to maintain strong employment”, etc., caused the US stock market to turn towards a rebound, with the Nikkei average also increasing to a level of 20,900 points on 7/6.

Next, the trend of the US bond market is the key to the dollar/yen exchange rate, which is a factor that greatly impacts the Japanese stock market. Although in terms of interest rate, the decline in the US long-term interest rate is due to the sale of dollars, it could also be a clue towards a “risk-on” market due to improvements in the financing environment for US companies. Also, weak dollar or dollar-based decline in interest rates is an advantage for developing countries that have numerous debts in US dollars, and coupled with effects from US-China friction which accelerate the shifting trend towards emerging markets, such as the ASEAN region, which serve as a manufacturing base, it may be an advantage to invest in emerging markets. As long as there is no “risk-off yen appreciation”, the weak dollar is not necessarily a disadvantage.

For the Japanese economy, the plan to execute the “Council on Investments for the Future”, which discusses the Growth Strategy, was showed on 5/6, in addition, the “Big-boned Policy” (Basic Policy for Economic and Fiscal Management) is scheduled to be confirmed in late June. Within these topics, matters that generate domestic demand may arise through bills or budgeting. If we also take into account measures towards concerns of a strong yen due to it entering the cycle of US interest rate reductions, we will want to keep our focus on stocks which are resistant to influences from the US-China friction, and which have potential in supporting strategies for domestic demand. 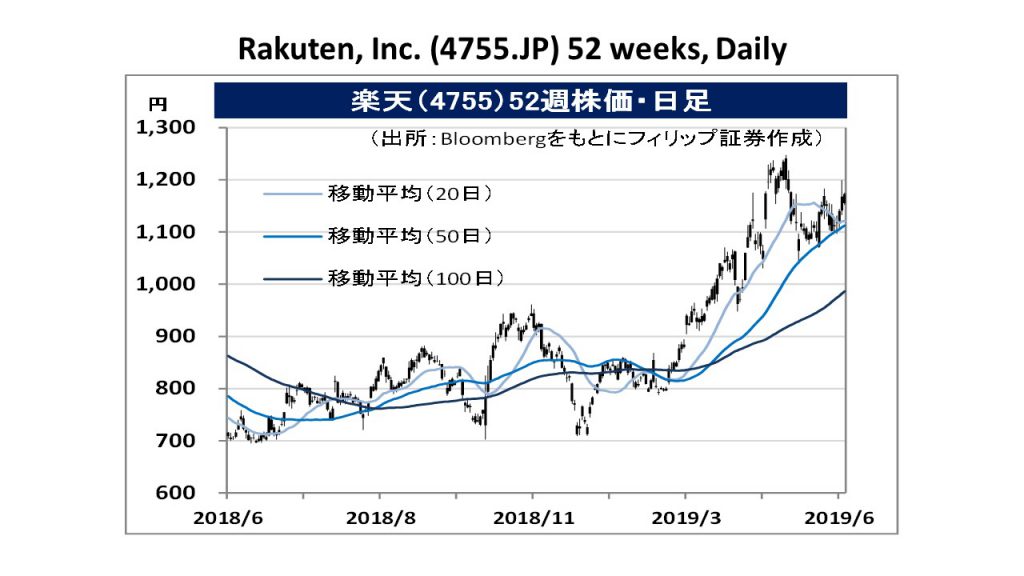 ・For 1Q (Jan-Mar) results of FY2019/12 announced on 10/5, sales revenue increased by 15.9% to 280.294 billion yen compared to the same period the previous year, operating income quadrupled to 113.662 billion yen, and net income increased by 6.0 times to 104.981 billion yen. Due to the expansion in their base of Rakuten card members and the extension of banking services, the FinTech business has grown. The 110.4 billion yen profit from the loss from valuation of securities following the IPO of Lyft have also contributed.

・For its FY2019/12 plan, excluding the securities services, sales revenue is expected to increase by 2 digits compared to the previous year. On 5/6, company announced the cooperation with JR East Japan towards the promotion of a cashless system. In spring 2020, using the Rakuten Pay app, in addition to the issuance of and the addition of funds to Suica, it will be available to be used as a form of payment in approx. 5,000 stations for rail, approx. 50,000 stops for buses, and in approx. 60,000 retail shops. 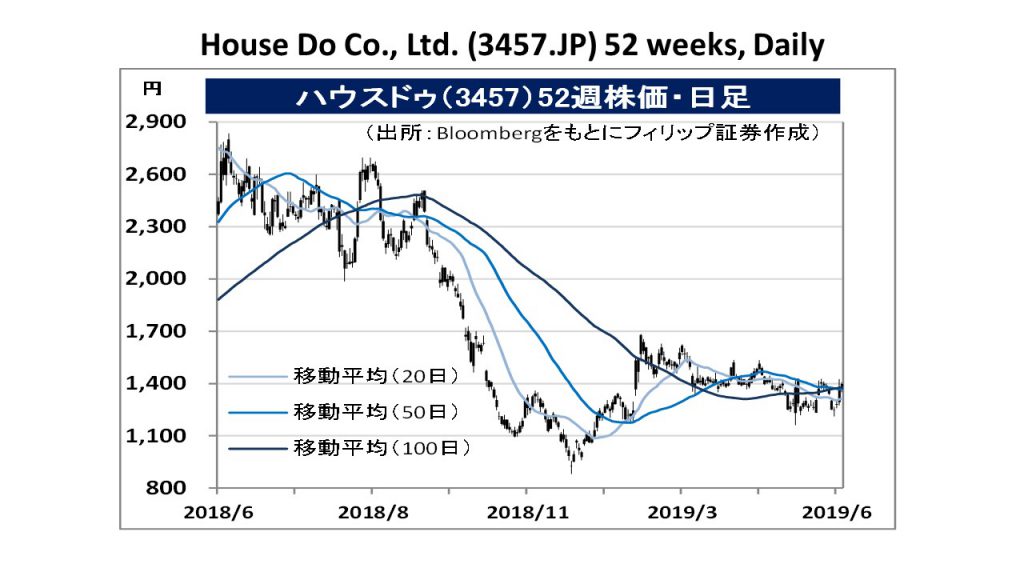 ・Established in 2009. Their main business is the real estate sale / rental franchise. Characterised by their “House Leaseback” business, which enables selling off houses whilst living in them. Started a new real estate leasing franchise business, “Rent Do”, from Jan 2018.

・For its FY2019/6 plan, net sales is expected to increase by 22.1% to 27.499 billion yen compared to the previous year, operating income to increase by 53.4% to 3.246 billion yen, and net income to increase by 55.0% to 1.983 billion yen. On 3/6, the Financial Services Agency announced an estimation of “requiring 20 million yen in old age”. Regarding old age reserves, there will likely be an increase in focus on house leaseback. For the purpose of strengthening measures against vacant rooms, AirTripStay and Airbnb Japan began a comprehensive business tie-up on 6/6. There is a need to focus on businesses that meet societal demands.