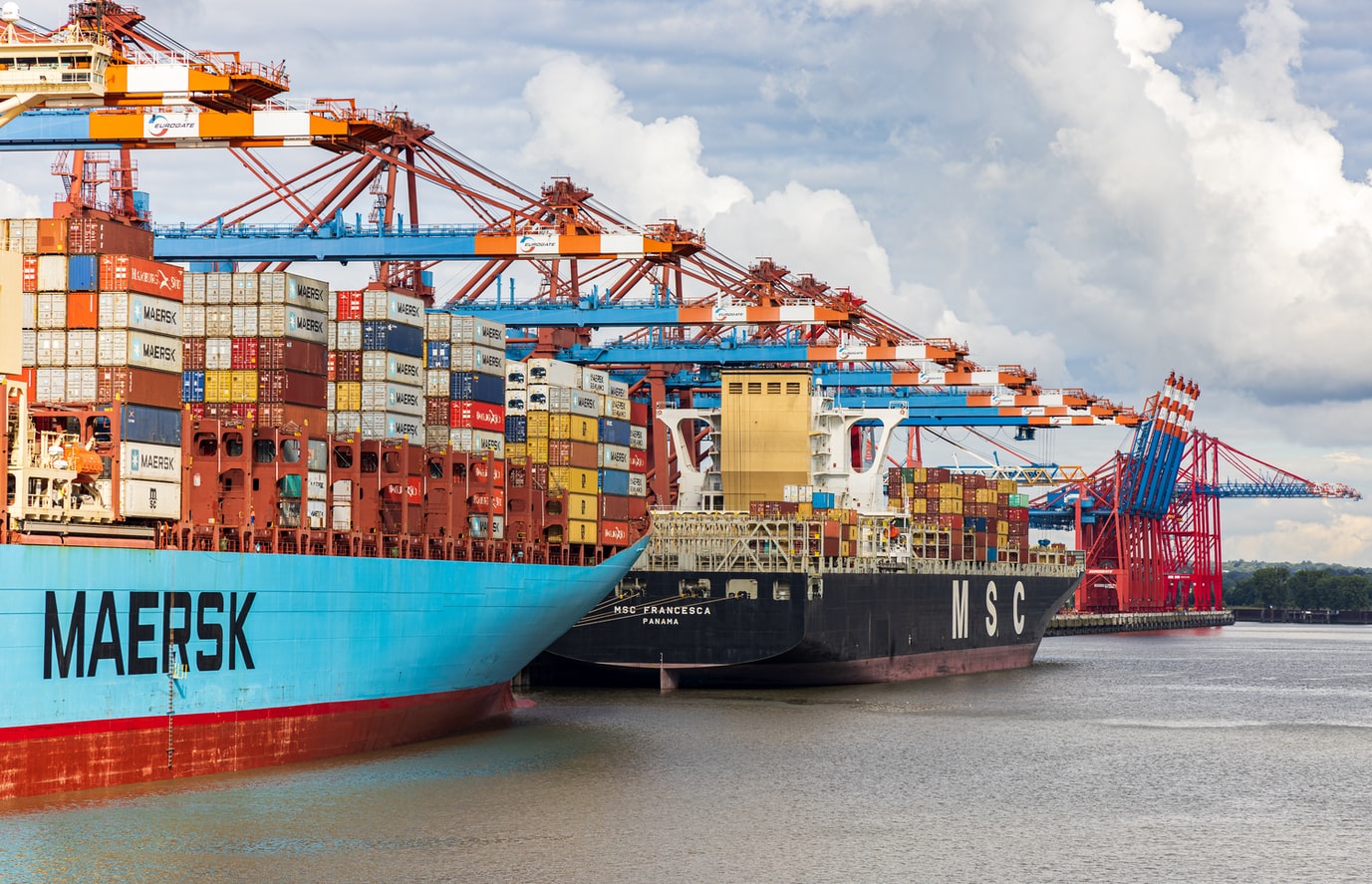 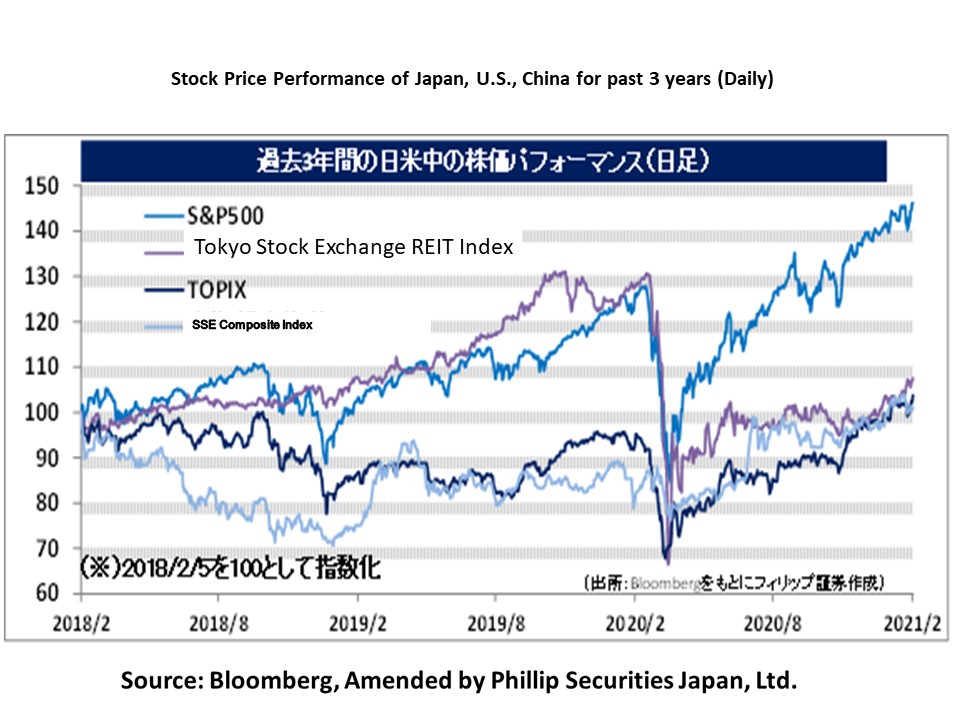 ”Container problem following on the heels of the Covid-19 pandemic?  – Focus on automotive industry”

On 1/2, the number of people vaccinated against Covid-19 in the US reached 26.5 million, exceeding the cumulative number of positive test cases.  As of 4/2, the number of people vaccinated worldwide has also reached 108.15 million, surpassing the cumulative number of people tested positive (104.83 million).  In response to the widespread use of vaccinations, global stock markets are also increasingly focusing on economy-sensitive stocks in anticipation of economies returning to normal.  As far as the forward-looking stock market world is concerned, it may not be an exaggeration to say that the Covid-19 pandemic has already passed.

Meanwhile, restrictions on economic activity continue in the real world.  Demand for the transportation of furniture and home appliances to North America has been strong since last summer due to booming housing sales.  Transportation of auto parts and semiconductors has also been recovering since autumn.  Under such circumstances, freight rates for marine container transportation have soared due to the emerging shortage of containers.  Rates have remained very high, with those for shipments from China to the US doubling from the same period last year, and those to Europe quadrupling for the same period.   With the large number of containers piling up in the region, this shortage of containers has been exacerbated by the rapid increase in cargo and the slowdown of unloading operations at US ports due to Covid-19 response measures.  In addition to the shift of some ocean freight to air freight due to congestion on container ships, the supply and demand for air freight space tightened due to a recovery in cargo movement especially for automotive parts, semiconductors and electronic equipment.  As a result, air freight rates to Europe and the US have soared.  It can indeed be said that “following on the heels of the Covid-19 pandemic, the next issue is container problem”.

In the automotive industry in particular, Germany’s Volkswagen was forced to reduce production at its largest plant in the world situated within Germany due to a worsening shortage of parts.   Honda was also reported to be cutting production in the US and Canada due to difficulties in procuring semiconductors.  The impact on business activities could be far-reaching, including production cutbacks, worsening cash flow due to increased product inventories, and stoppage of new orders until the turmoil is resolved, with concerns that it could spread to the entire industry.

It is also noteworthy that Apple (AAPL) has reportedly approached several automakers, including those in Japan, about producing electric vehicles (EVs).  Indeed, a new wave is sweeping through the automotive industry.  For Japanese automakers, the horizontal division of labor model, in which Apple does design and development and only outsources production, is not likely to be readily accepted.  Some observers are speculating that Nissan Motor (7201) will take over the project because firstly, Apple’s R&D base in Japan is located in Yokohama, and secondly, Nissan’s subsidiary, Mitsubishi Motors (7211), will end EV production at the end of March, thereby freeing up production lines.  There is a possibility that Alphabet (GOOG), which owns Google, and other companies may also follow suit, which will increase the attention of foreign investors to Japanese automakers. 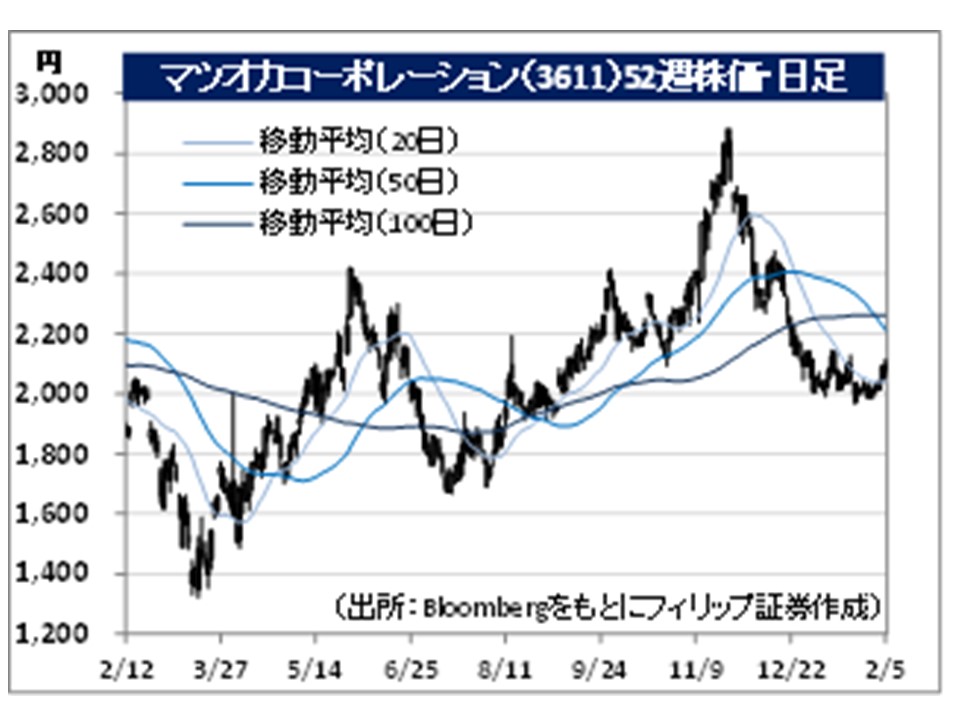 ・Founded in 1956 as Matsuoka Kimono Store.  Company operates an “apparel OEM business” in which it receives orders from apparel manufacturers, trading companies, and mass merchandisers to produce apparel under the consignor’s brand, including planning, manufacturing, and distribution.

・For 2Q (Apr-Sep) results of FY2021/3 announced on 13/11, net sales increased by 7.3% to 28.893 billion yen compared to the same period the previous year, and operating income increased by 89.2% to 2.918 billion yen.  Although orders for existing products were sluggish due to a sharp drop in demand for apparel products following the Covid-19 pandemic, sales and profits increased thanks to the production of cloth masks and the development of a production system that responds flexibly to customer needs.

・For its full year plan, net sales is expected to decrease by 12.5% to 50.0 billion yen compared to the previous year, and operating income to increase by 22.9% to 3.2 billion yen.   In response to the military coup that occurred in Myanmar on 1/2, company announced that there would be no disruption to operations at the two plants it operates in the country.  As habits of wearing masks due to the Covid-19 pandemic take root, diversification of demand for masks with functions corresponding to seasonal changes, and those that are comfortable to wear, made of comfortable materials, and rich in design, should contribute to business performance. 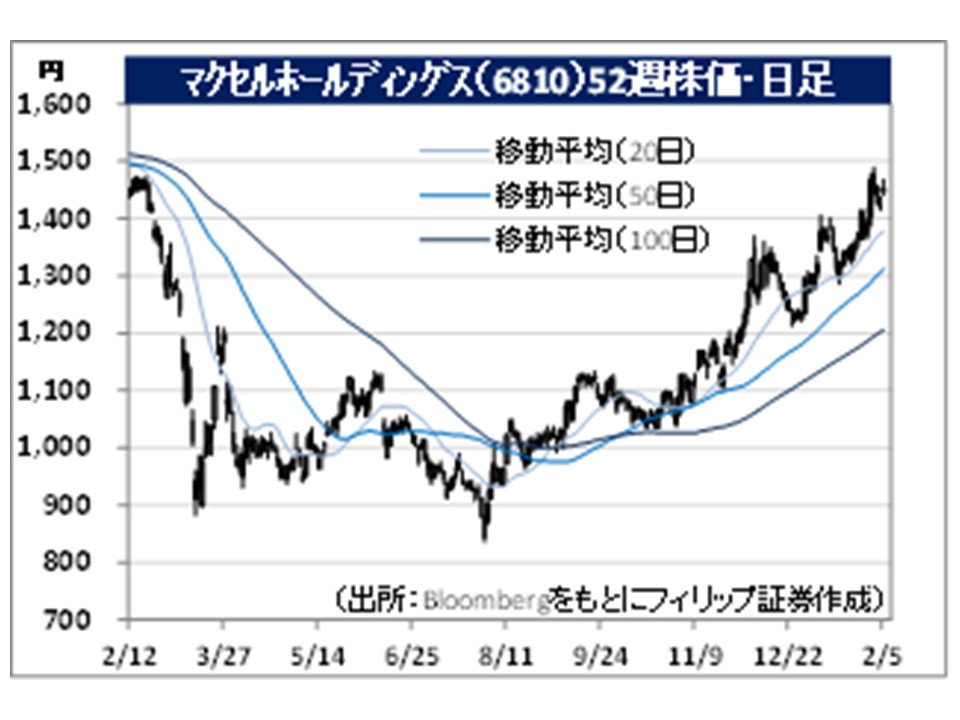 ・Established in 1966.  After becoming a wholly-owned subsidiary of Hitachi, Ltd (6501) in 2010, company was relisted in 2014 and became independent from the Hitachi Group.  Mainly engaged in the manufacture and sale of energy, industrial materials, and electrical and consumer products.

・For 9M (Apr-Dec) results of FY2021/3 announced on 29/1, net sales decreased by 7.2% to 103.336 billion yen compared to the same period the previous year, and operating income increased two times to 2.849 billion yen.  Although sales of optical components for automotive applications decreased, sales of lithium-ion batteries for consumer use and embedded systems relating to semiconductor increased, while improved profitability of health and beauty care products and cost reduction measures contributed to higher operating income.

・Company has revised its full-year plan upwards.  Net sales is expected to decrease by 5.5% to 137.0 billion yen compared to the previous year (original plan 133.0 billion yen), and operating income to return to profitability from minus 137 million yen in the previous year to 3.5 billion yen (original plan 1.5 billion yen).  We expect to see more stay-at-home demand, recovery in automotive and semiconductor-related products, and continued improvement in the profitability of health and beauty care products.  Company has developed a sulfide “coin-type all solid-state battery” that can be used at ultra-low temperatures of minus 50 to 125 degrees Celsius, which is expected to be in demand for transporting Covid-19 vaccine.