Japan Weekly Strategy Report- Chance for Japanese companies even in the midst of US-China friction May 27, 2019 367 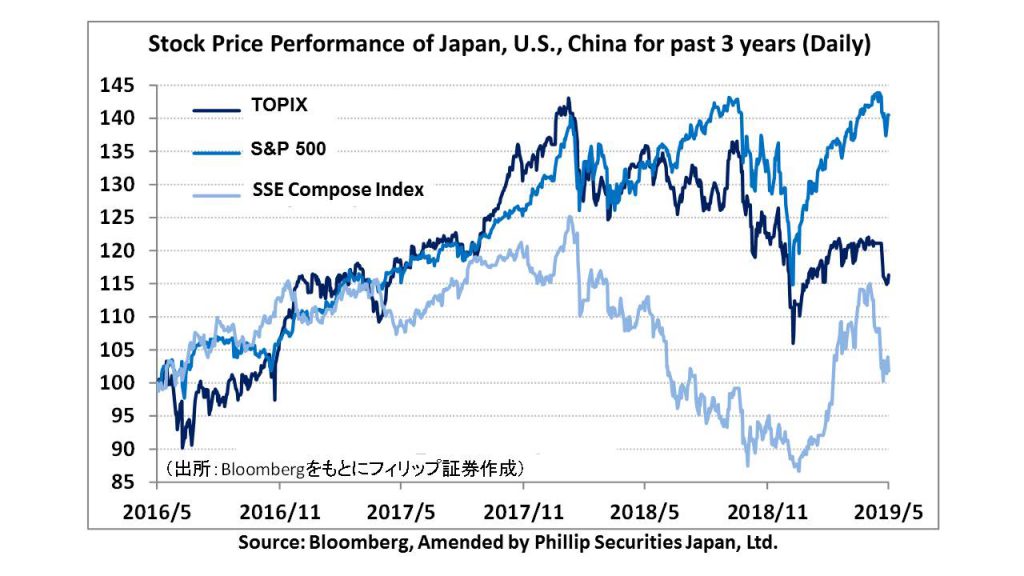 Chance for Japanese companies even in the midst of US-China friction?
The “fourth round” of additional sanctions tariff (up to 25% tariff on about 300 billion USD worth of Chinese products) levied on China announced by the Trump administration on 13/5 has shaken the Japanese stock market badly. Unlike the first to third rounds launched last year, this round involves consumer goods which are highly-dependent upon imports from China and which covers 40% of total imports from that country. There are therefore concerns that these high tariffs will directly lead to rising import costs, thereby inducing price hikes in the US, as well as a slowing down of the global economy due to a decline in China’s growth rate. For the Japanese stock market during the 13-17/5 period, the Nikkei average consolidated at around 21,000 points, after falling from the 10/5 closing of 21,344 points, and reaching 20,750 points on 14/5. As stated in the “1st April, 2019 Investment Strategy Weekly Report”, the level of 21,000 points for the Nikkei average is an important turning point for the market in the medium to long term.
In the “fourth round”, mobile phones and laptops accounted for a huge percentage of the value of imports from China in 2018. However, “TV game consoles”, “umbrellas / walking sticks”, “PC monitors” and “toys” each has high dependency on China of more than 80%. As a result, US companies are expected to rush to secure alternative import sources. Japanese companies should have the ability to look out for business opportunities in the midst of such a conflict. In such a situation, it does not suffice to just simply wholesale Chinese products. Rather, companies should import raw materials and other materials from China, process and assemble them in Japan, and finally export as Japanese products.
On 14/5, Walt Disney announced that it had attained full management control of “Hulu”, a video distribution service provider. The company is also planning to launch “Disney Plus”, a new video distribution service, this December. With Disney having exclusive distribution of good contents such as “Disney”, “Marvel”, “Star Wars”, etc, Netflix, the leading video distribution provider, and Amazon and Apple etc, which have video distribution services, should become more vigilant and proactive in sourcing rights to good content. In such a situation, Japanese animation companies are likely to surface as potential candidates. Currently, Marvel’s movie, “Avengers: Endgame”, is a big hit. At the same time,

Comcast’s subsidiary, “NBCUniversal”, which has transferred Hulu’s shares to Walt Disney, is also making a hit with
“Pokémon Detective Pikachu” produced by its subsidiary, “Legendary Entertainment”.
While there are concerns about the global economy and financial markets as the US-China trade war intensifies, we also
should not forget that US companies could be keenly eyeing Japanese companies.
In the 20/5 issue, we will be covering Toei Animation (4816), Yokogawa Bridge Holdings (5911), Moonbat (8115),
Marui Group (8252), Sony Financial Holdings (8729) and Sumitomo Realty & Development (8830). 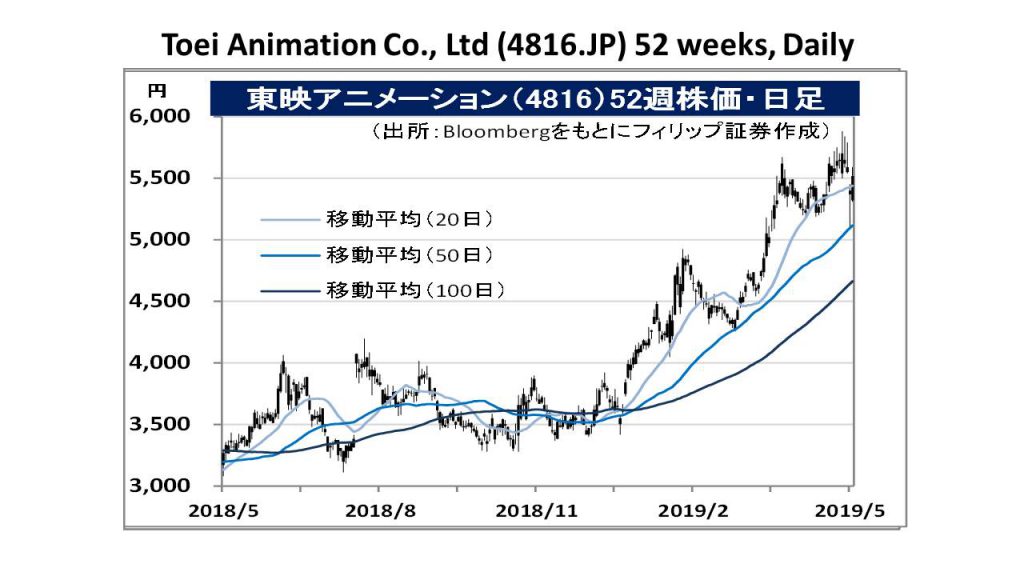 ・For FY2020/3 plan, net sales is expected to decrease by 17.1% to 46.2 billion yen compared to the previous year, and operating income to decrease by 23.8% to 12.0 billion yen.  In terms of company plan, production work for TV will be reduced, licensing revenue will also be reduced as a reaction to the major contracts for game machines of the previous year, and SG&A expenses for the medium-term will be increased. However, the global trend of expanding video distribution and game apps via smartphone diffusion will remain unchanged. We should also take note of the company being a model for animation production companies appearing in popular dramas currently being broadcast. ・For FY2020/3 plan, net sales is expected to increase by 7.8% to 153.0 billion yen compared to the previous year, and operating income to increase by 6.6% to 11.2 billion yen. Expected future demands include large-scale renewal and repair of expressways, emergency measures for national resilience, and the western extension of the Osaka Bay Expressway.  Supported by the Linear Chuo Shinkansen and large-scale civil engineering / building-related projects in metropolitan redevelopment areas, the record orders (153.24 billion yen) received at the end of FY2019/3 are expected to continue to grow strongly going forward.