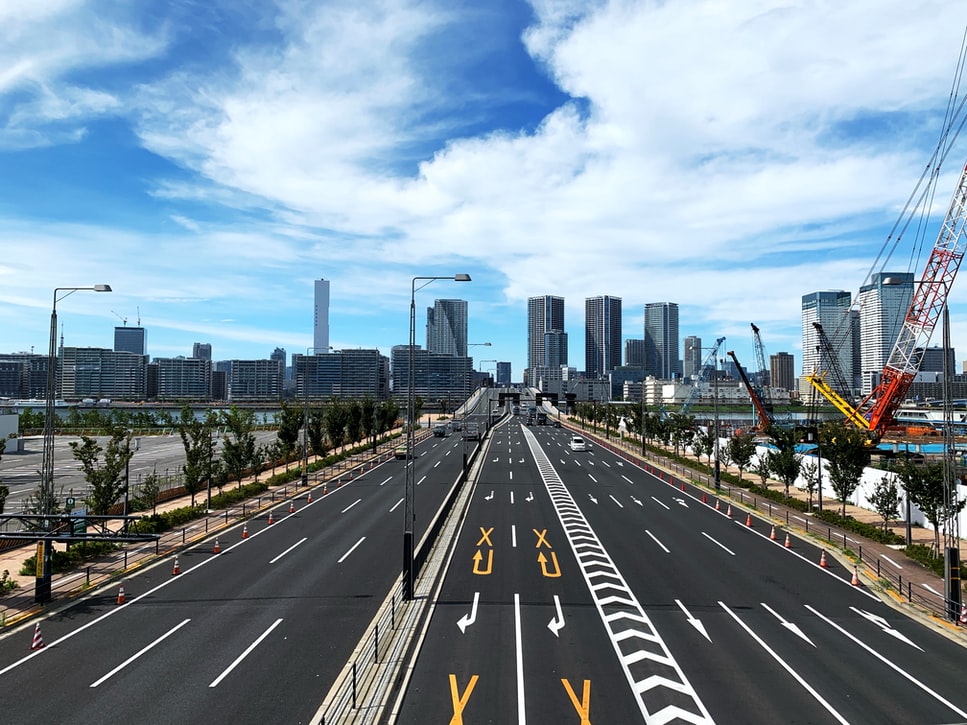 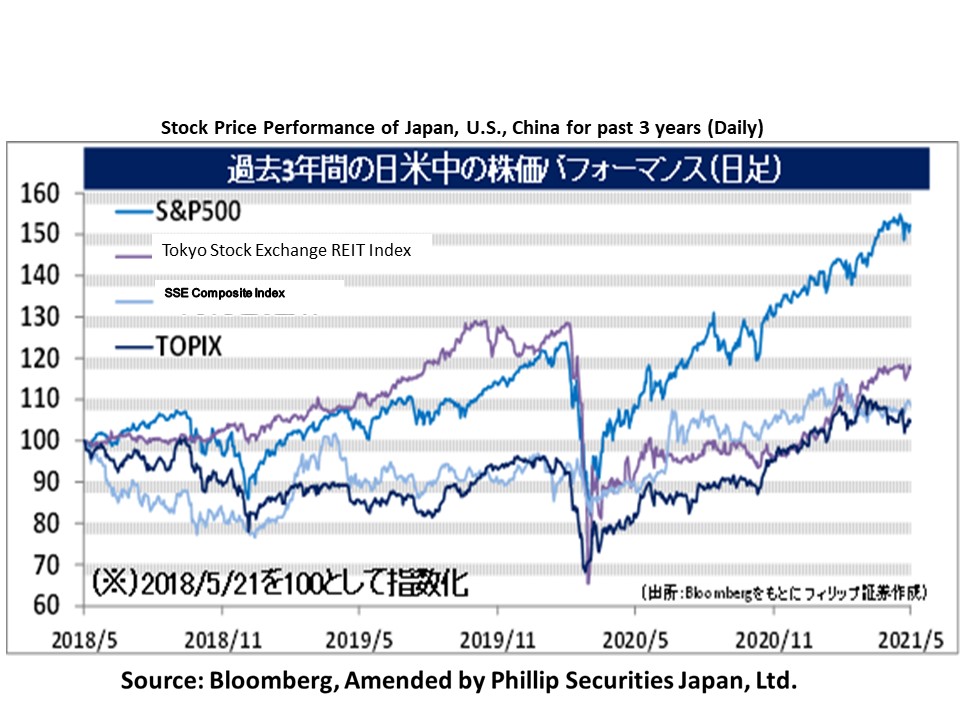 As mentioned in the 6th May, 2021 issue of this Weekly Report, there is a phase in Bitcoin price trends that affect the stock market.  On 19/5, the price of Bitcoin in terms of USD temporarily dropped 28.5% to $30,681 from the previous day’s close following the announcement of new regulations in China, and on the same day, the US Dow Jones Industrial Average dropped more than 500 points from the previous day’s close.  Although the closing price of Bitcoin recovered to $37,000 at the end of the day, and the closing price of the NY Dow recovered to 164 points lower than the previous day, headwinds continued the following day on the 20th, as it was reported that the US administration’s tax reform is scheduled to include a reporting requirement to tax authorities for remittances of crypto assets of $10,000 or more.  It is therefore important to continue to pay attention to the cyclical ups and downs associated with the coming half-life of mining rewards every four years.

As for investing in Japanese stocks, it is important to note that Tesla’s stock price and the price of Bitcoin have become increasingly correlated since the purchase of Bitcoin by US electric vehicle (EV) maker Tesla (TSLA), and that sales of Tesla’s EVs in the Chinese market, which had been a driving force behind Tesla’s growth, had fallen sharply in April from the previous month.  Panasonic (6752), which supplies Tesla with lithium-ion batteries for EVs, Sumitomo Metal Mining (5713), which supplies Panasonic with cathode materials for batteries, and Nippon Denko (5563), which is contracted by Sumitomo Metal Mining to manufacture some of its cathode materials, could be affected if the “Tesla risk” materializes.

On 18/5, the IEA (International Energy Agency) released a report aiming to reduce greenhouse gas emissions to virtually zero by 2050.  While the report is said to be used as a reference document for “COP26”, which is scheduled to be held in Scotland this coming November, the IEA had stated that,  in order to achieve real zero emissions, nearly 90% of electricity must be produced from renewable energy sources and most of the rest from nuclear power by 2050.  It further states that annual global energy investment needs to be raised from the current $2 trillion to $5 trillion by 2030.  In the run-up to COP26, discussions on the revision of the power supply composition ratio for 2030 are becoming more and more active in Japan.  The share of nuclear power generation in Japan’s power source mix fell to 4% last year, and the debate over nuclear power generation is likely to have a major impact not only on the Japanese stock market but also on the political situation.

In addition, on 19/5, the revised Banking Act was enacted, which will allow banks to engage in temporary staffing, system sales, data analysis, and advertising, and is expected to come into effect in November.  Restrictions on the maximum amount of investment in business companies will also be relaxed, and this is expected to open up a whole new world of profit opportunities for banks.   A full-fledged correction in the level of regional bank stocks, which have been routinely left undervalued as low PBR (price-to-book ratio) stocks, can therefore be expected. ・After Kihachiro Okura founded the Okura Gumi Shokai in 1873, the company’s predecessor, the Nippon Doboku Co., Ltd, was spun off and established in 1887.  One of the largest general contractors, engaging in civil engineering, building works, development, and other businesses.

・For FY2021/3 results announced on 14/5, net sales decreased by 15.5% to 1.4801 trillion yen compared to the previous year, and operating income decreased by 22.2% to 130.516 billion yen.   Amid sluggish private-sector capital investment and construction investment, the postponement of construction starts and the suspension of construction work due to Covid-19 had impacted revenue negatively, and the deterioration of profit margins in the civil engineering and development businesses had led to a decline in profit.

・For FY2022/3 plan, net sales is expected to increase by 10.8% to 1.64 trillion yen compared to the previous year, and operating income to decrease by 31.0% to 90.0 billion yen.   Reason for the forecasted decrease in profit is that the busy season related to the Olympic Games has passed, and the number of large-scale construction projects before completion will decrease as a result.  In addition to the development of concrete technology that uses calcium carbonate to trap CO2, subsidiary Taisei Rotec is also planning to test and install a self-healing asphalt coating, which is being jointly researched with Aizawa Concrete in Hokkaido, in the current fiscal year. 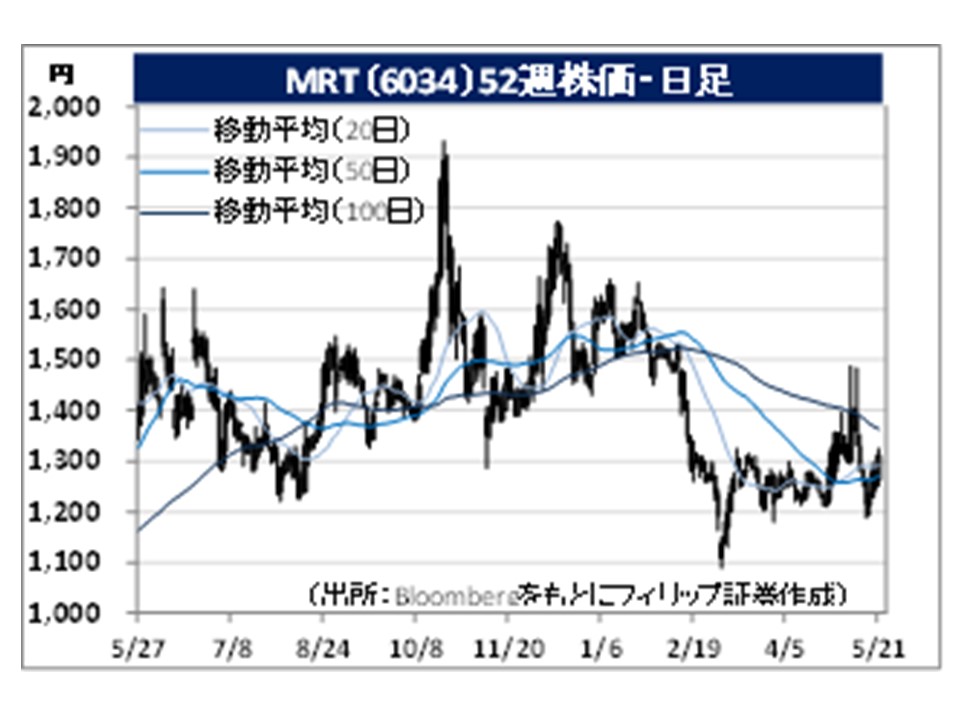 ・Established in 2000 as a mutual aid organization of doctors at the University of Tokyo Hospital.   Company develops a medical information platform business for physicians focusing on the introduction of part-time and full-time physicians via the Internet.

・For FY2021/12 plan, net sales is expected to increase by 9.3-17.1% to 2.8-3.0 billion yen compared to the previous year, and operating income to range from minus 35.7% – plus 2.1% to 170-270 million yen.   Vaccination of the elderly with the Covid-19 vaccine is now in full swing in many areas, and the opening of large-scale vaccination centers for the Covid-19 vaccine is scheduled for 24/5 in Tokyo and Osaka.  Company is responding to an increase in job offers from medical institutions and local governments by dispatching potential nurses, preparing activity manuals, and providing vaccination training.