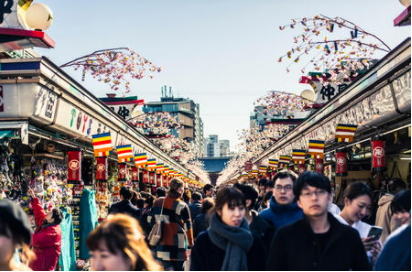 The Japanese stock market may have begun to surge as it is caught between the US market, which is wary of monetary tightening being hinted at the US FOMC meeting on 26/1, and the Chinese market, which, in contrast, has been easing monetary policy, with the PBOC lowering its preferential lending rate for two consecutive months.

The Nikkei Average, which maintained the level of around 28,000 points on 14/1, had ended in the 27,000 points range from 18/1 onward.  At the closing price on 20/1 (27,772 points), the Price-to-Book ratio (PBR), weighted by market capitalization, was 1.25 times.  It has been difficult for the market to decline due to the lingering effects of the replacement of three stocks at the end of September last year with high PBR stocks that are popular among investors.  However, the average PBR level of 1.20 times (26,660 points), which is the average level over a 5-10 year term, is likely to be the target for lower prices for the time being.

HSBC Asset Management’s New Year online seminar for the media held on 19/1 has attracted a lot of attention.  Against a current awareness that “The global economy is currently in a mid-cycle ‘expansion’ phase, with economic growth and corporate profits past their peaks, inflation rising, and policy normalization underway”, it is noted that “investors have enjoyed high returns over the past 18 months, mostly from borrowing from the future at high PERs, causing the macro outlook to deteriorate due to higher market valuations and lower margins of safety”.  In addition to this, it was noted that European, Japanese, and Asian emerging market stocks, which have been lagging behind US stocks, have shown some promise. It was further noted that China’s economy has moved from monetary policy and regulatory tightenings to monetary policy easing to prepare for shocks such as credit concerns in the real estate industry.

From Dec 2020 to Jan 2021, this Weekly had reported that the multiples of the “S&P GSCI Total Return Index” for commodities to the S&P500 Index were at historic lows, that a “commodity shift” accompanying a “shift to emerging economies” had occurred from around 2002 to mid-2007 after the bursting of the IT bubble in 2000, and that amongst Japanese stocks, steel and shipping stocks had outperformed other industry indices by a wide margin due to this commodity shift.  In the 13th Dec issue last month, we had expressed our bullish stance on the Japanese stock market, citing that, “Although the supply-demand situation has stalled, we are waiting for inflation-averse money”.  The view that a major trend toward a commodities shift has already begun remains unchanged at this point, one year later.  In terms of the Poverty Index, which is the sum of the unemployment rate and the inflation rate, Japan is among the lowest in the world, and China is also low globally.  If inflation-averse global money were to shift from the US to China, there seems to be no reason that such funds will also not come to Japan. 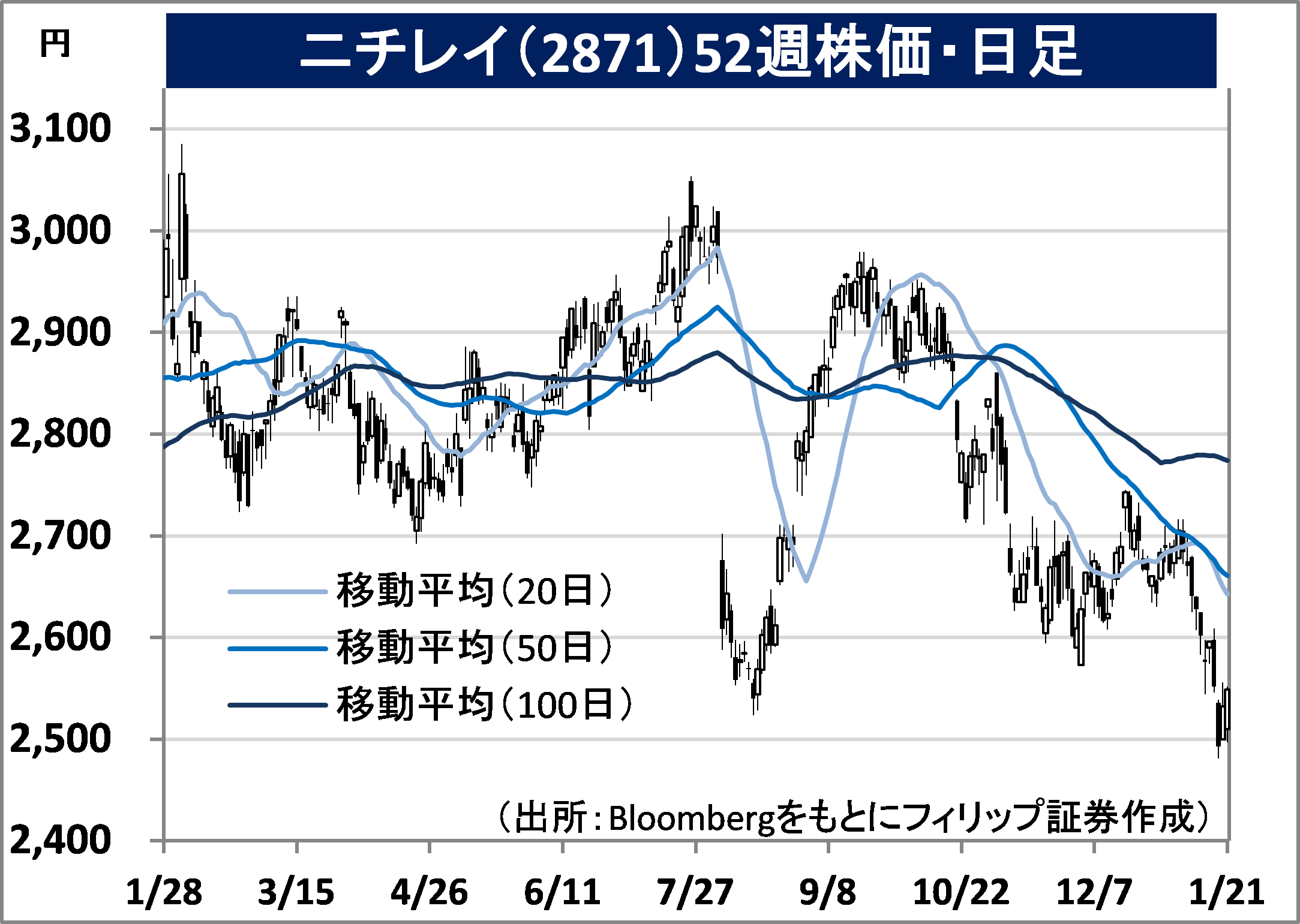 ・Established in 1942 based on the Fisheries Control Order.   Mainly engaged in the Processed Food Business, Marine Products, Meat and Poultry Business, Cold Storage Logistics Business, and Real Estate Business.  In addition to being the leader in refrigerated warehousing and frozen foods, low-temperature logistics is expanding, especially in Europe.

・For 1H (Apr-Sep) results of FY2022/3 announced on 2/11, net sales increased by 4.5% to 294.578 billion yen compared to the same period the previous year, and operating income decreased by 4.3% to 16.02 billion yen.  Net sales increased owing to steady sales in mainstay Processed Food Business and Cold Storage Logistics Business, but operating income decreased due to lower capacity utilization caused by the spread of Covid-19 infection in Thailand, and higher raw material and procurement costs.

・Company has adjusted its full-year plan downwards.  Net sales is expected to remain unchanged at 600.0 billion yen, up 4.8% YoY, and operating income to increase by 0.2% to 33.0 billion yen (original plan 35.0 billion yen).  Company is strong in croquettes and fried rice in the frozen foods for home use sector, ranking second in domestic production of croquettes and third in fried rice in 2020, with a 51% increase over the previous year.  Furthermore, the Covid-19 situation in Thailand, a factor in the decline in profits, has stabilized since Oct last year. 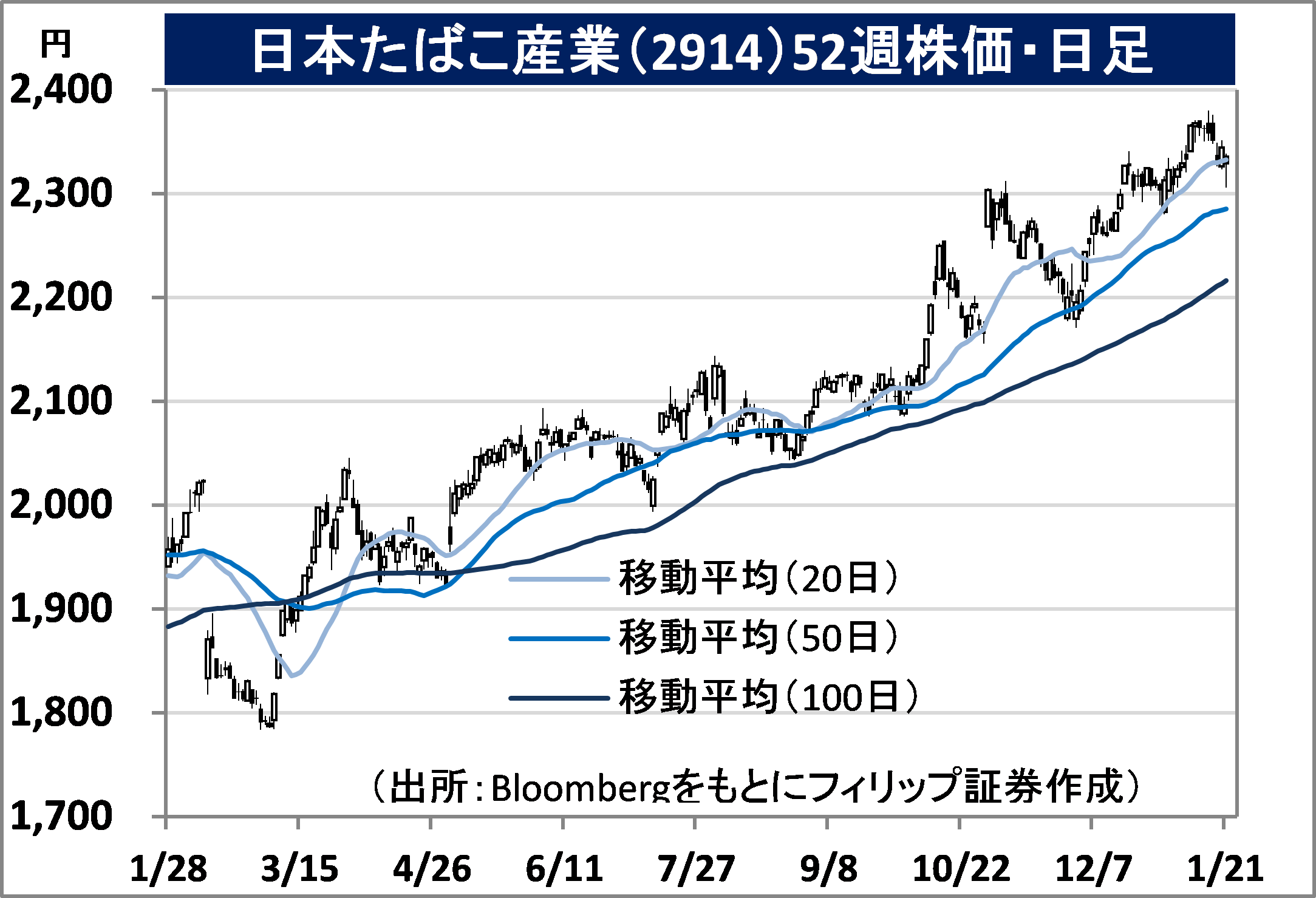 ・Established in 1985.  It was previously known as the Japan Tobacco and Salt Public Corporation.  In addition to the mainstay domestic tobacco and overseas tobacco businesses, also proactively diversifying into pharmaceuticals, processed foods, etc.  Acquired Katokichi (now TableMark) through TOB in 2008.

・For 9M (Jan-Sep) results of FY2021/12 announced on 29/10, sales revenue increased by 10.9% to 1.766 trillion yen compared to the same period the previous year, and operating income increased by 23.2% to 480.696 billion yen.  Sales increased due to price hike and sales volume increase in overseas cigarette business.  With the launch of Ploom X, sales of RRP (products that may reduce health risks associated with smoking) had also increased.