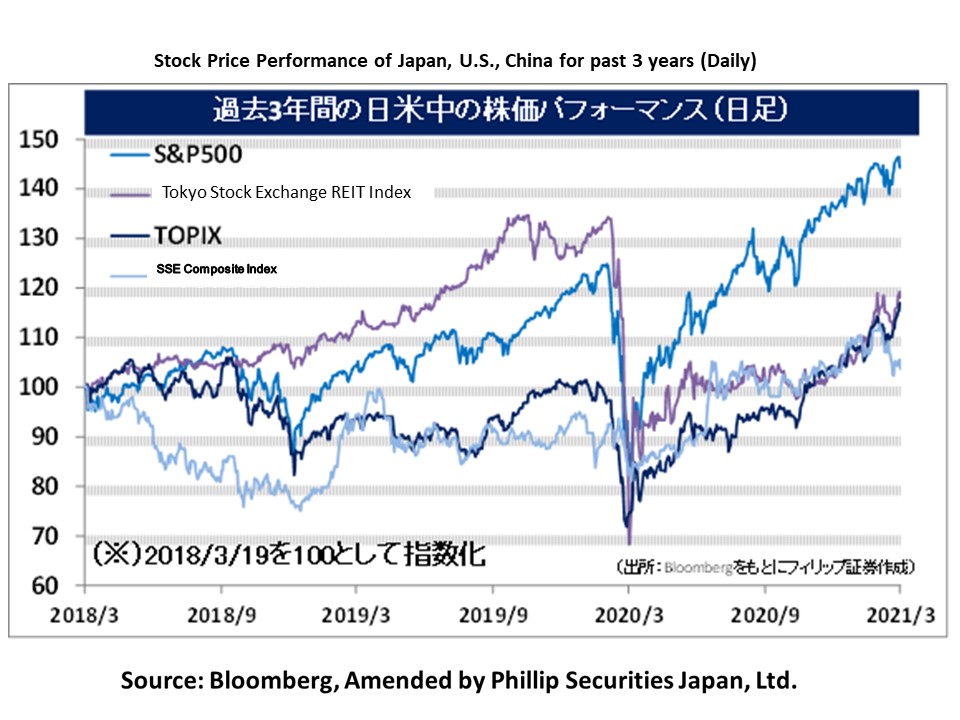 The BOJ decided at its Monetary Policy Meeting on 19/3 to raise the permissible range of fluctuation in the long-term interest rate for the yield on 10-year government bonds, which will continue to be pegged at around zero percent, to plus or minus 0.25 percent, instead of the previous 0.2 percent.  It dropped “an annual 6 trillion yen” target for purchases of ETFs, while keeping the upper limit of annual purchase of 12 trillion yen.  As for short-term interest rates, the application of a negative interest rate of -0.1% to the BOJ’s current account balance will remain unchanged, and earnings for financial institutions are expected to improve due to the widening gap between long- and short-term interest rates constituting the loan-deposit interest spread of financial institutions.  In addition, the BOJ decided to purchase only TOPIX-linked ETFs, and on 19/3, the Nikkei Average fell from the previous day while TOPIX held steady, with bank and insurance stocks among others rising across the board.  While the correction of low PBR (price-to-book value ratio) value stocks is likely to shift to the financial sector, high-priced stocks with high PBR which contribute more to the Nikkei Average are likely to be sold off.

It was reported that, in its effort to strengthen the power grid, which is a challenge for renewable energy power generation, the Ministry of Economy, Trade and Industry (METI) is considering installing offshore wind power transmission lines on the seabed using submarine cables, which are said to be less expensive than those used on land.  In this regard, high voltage direct current (HVDC) technology is coming into the spotlight, as high voltage “direct current” with less power loss is suitable for long distance power transmission.  In the HVDC market, in addition to Switzerland’s ABB, Germany’s Siemens, and the US’s GE, which have established DC power grids in Europe, we also have Toshiba (6502) and Mitsubishi Electric (6503).  Together, these are the five dominant players globally in this field.  Last year, Hitachi (6501) completed the acquisition of ABB’s power grid business and became the world’s top player in the HVDC sector.  Sumitomo Electric Industries (5802) also has technology for DC submarine transmission cables used in HVDC, and has a business alliance with Siemens.

On 5/3, the Cabinet approved a decision to amend the Copyright Act to simplify the procedures for handling the rights of “simultaneous distribution,” whereby TV programs being broadcast are also streamed simultaneously on the Internet.  This law is scheduled to go into effect in January, 2022.  In addition to simultaneous distribution, “follow-up transmission” and “on-demand distribution” will also be covered.  With the easing of regulations that required separate rights adjustment and processing for broadcasting and distribution, conditions are ripe for TV stations, that have been under pressure from a decline in terrestrial advertising revenue due to online advertising, to depend on TV program content sales and licensing revenue as their main source of revenue.  Among Japanese stocks, IP (intellectual property) assets in the entertainment industry are highly valued overseas, which in some respect justifies the high PBRs of stocks of companies with IP.  If the vast accumulation of IP assets such as TV program content from the past can be utilized on the Internet, it is unlikely that the current low PBR situation of related company stocks will continue. 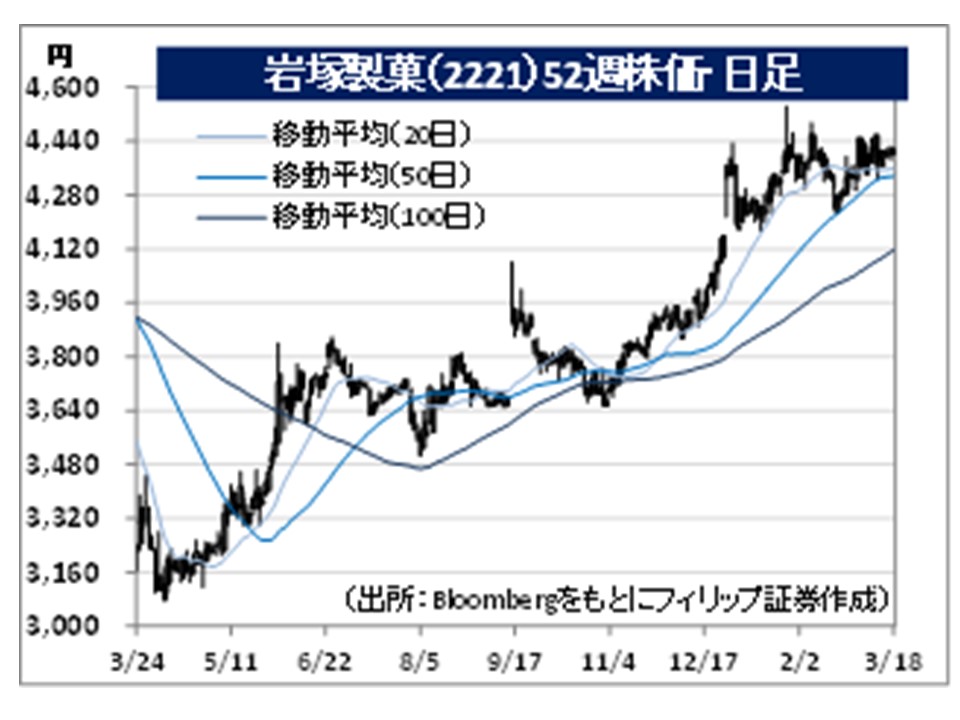 ・Established in 1947 in present-day Nagaoka City, Niigata Prefecture.  Engaged in the rice cracker business, manufacturing senbei, arare, and okaki, all being various forms of rice crackers.  Ranked third in Japan in the rice crackers sector.  In terms of earnings, company is characterized by dividend income from Taiwan’s Want Want Group, in which it has invested and provided technical support. 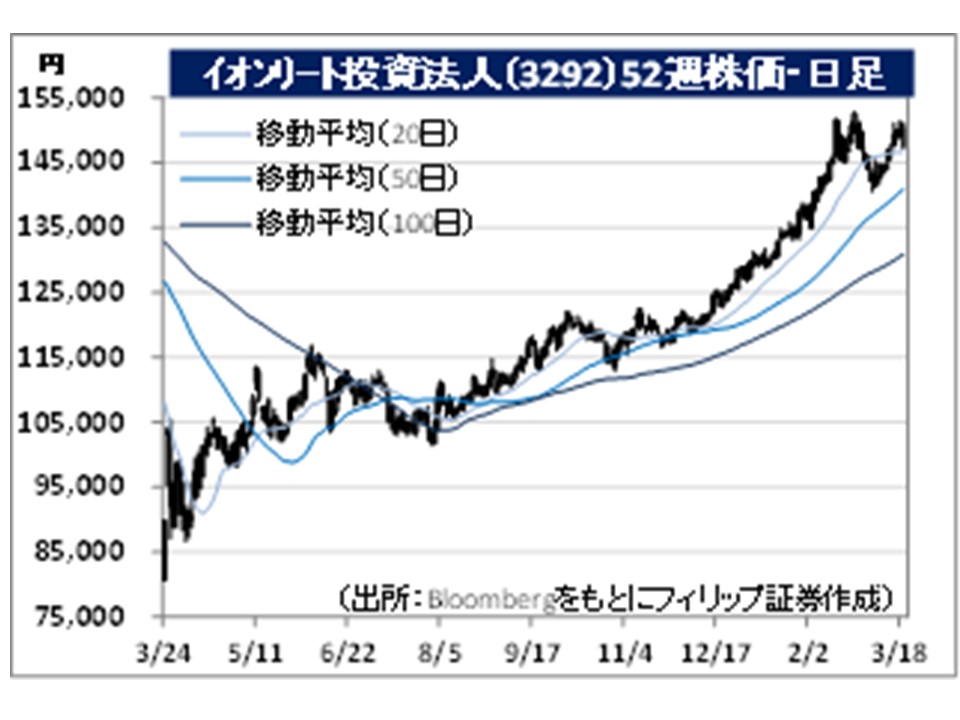 ・For FY2021/7 (Feb-Jul) plan, operating revenue is expected to decrease by 0.1% to 17.69 billion yen compared to the previous period (FY2021/1), operating income to decrease by 1.4% to 6.706  billion yen, and distribution per unit to increase by 0.5% to 3,200 yen.  Company’s forecasted annual distribution yield through FY2022/1 at the closing price on 18/3 is 4.25%, and NAV (Net Asset Value) is 1.06x.  Positioning as “lifestyle infrastructure assets” for local communities, company has secured  stable rents through master lease contracts based on fixed rents with AEON Group companies.