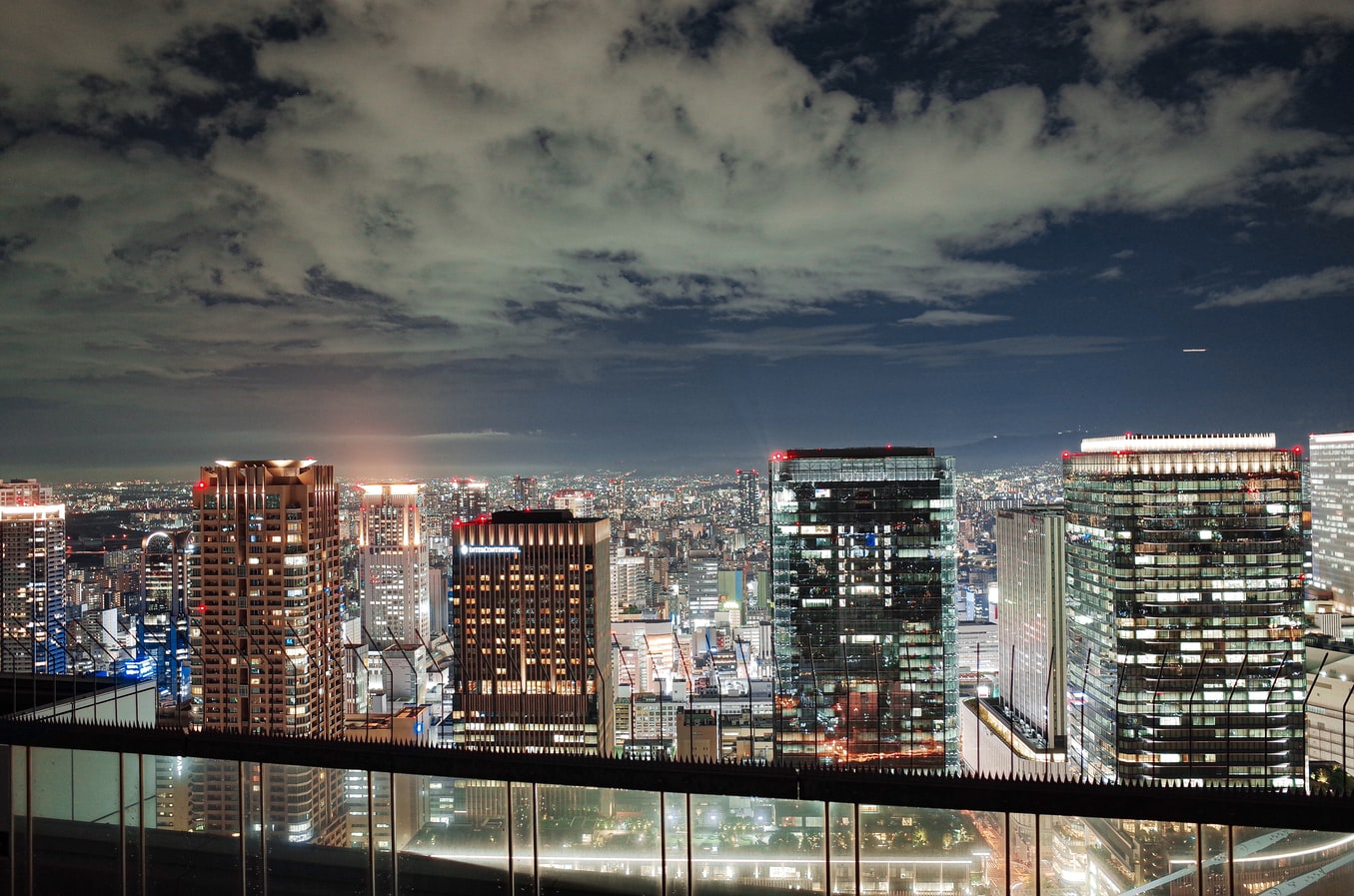 ”An Increased Shift From Growth to Value”

In the 23rd September 2020 issue of our weekly report, we mentioned about the possibility of buyback pressure weakening before the new selling date settlements for system margin trading as a result of the end of 4-day holiday having passed the half year mark since the Nikkei Stock Average’s year low on 19/3, however, Japanese stocks outstripped the bearish U.S. stock market with the Nikkei Stock Average remaining strong without falling under 23,000 points. This is thought to be largely due to the fact that it was supported by the purchasing demand towards the last day before the ex-dividend date that had its base date in end September.

However, this does not always mean that stocks with high company forecasted dividend yield are always bought. Even amongst stocks with top forecasted dividend yield in the Nikkei Average High Dividend Yield Stock 50 Index, the stocks bought on 23/9 were those from industries such as trading companies, insurance, electrical equipment and communications, whereas stocks such as Japan Tobacco (2914), which had the top forecasted dividend yield, and those from industries such as banking and petroleum fell compared to the previous day. While there are movements across the world of a start of a portfolio shift from growth stocks mainly involving major high-tech stocks to undervalued value stocks, on the other hand, there are also movements where there is a particular avoidance for deep value stocks that are undervalued. Deep value stocks are regarded as stocks that fall under mature industries, such as energy or the conventional type of banks, etc. It is likely that attention will be on the fact that distinctive movements are growing stronger even amongst stocks that have high forecasted dividend yield.

UBS Asset Management predicts that the emergency approval for 1-3 types of COVID-19 vaccines would be obtained within the next few months, and the vaccine announcement will result in greater forecasts of a recovery in earnings in corporations other than those benefitting from work from home, such as high-tech stocks. They also indicated that the anticipation of the vaccine will encourage investment in other sectors or regions that easily benefit from a normalisation of the economic cycle. Also, regarding the Tokyo Olympics which is being postponed to next year, John Coates, the Coordination Committee Chairman of the International Olympic Committee (IOC) expressed on 7/9 that “the Olympics will likely be held regardless of whether there is a spread of COVID-19. It will be opening on 23rd July next year”, in addition, based on the fact that international sports meets were held in North America, which was faced with a severe spread of the virus, President Bach displayed confidence that the Olympics would be held, saying that “it can be safely held even without a vaccine”. The anticipation of the Olympics being held is related to the expectation of a climate boost in the Japanese economy, and at the same time, can also turn out to be strong factor that would push the shift from growth to value.

However, regarding the immediate global economy, even by looking at the change in various commodity prices, there is a need to be careful of the possibility of it hitting a peak in the temporary recovery of the economy up to August, in addition to the fact that it is becoming difficult to see further improvement in the economy for the time being due to the resurgence of a spread of COVID-19 in Europe. 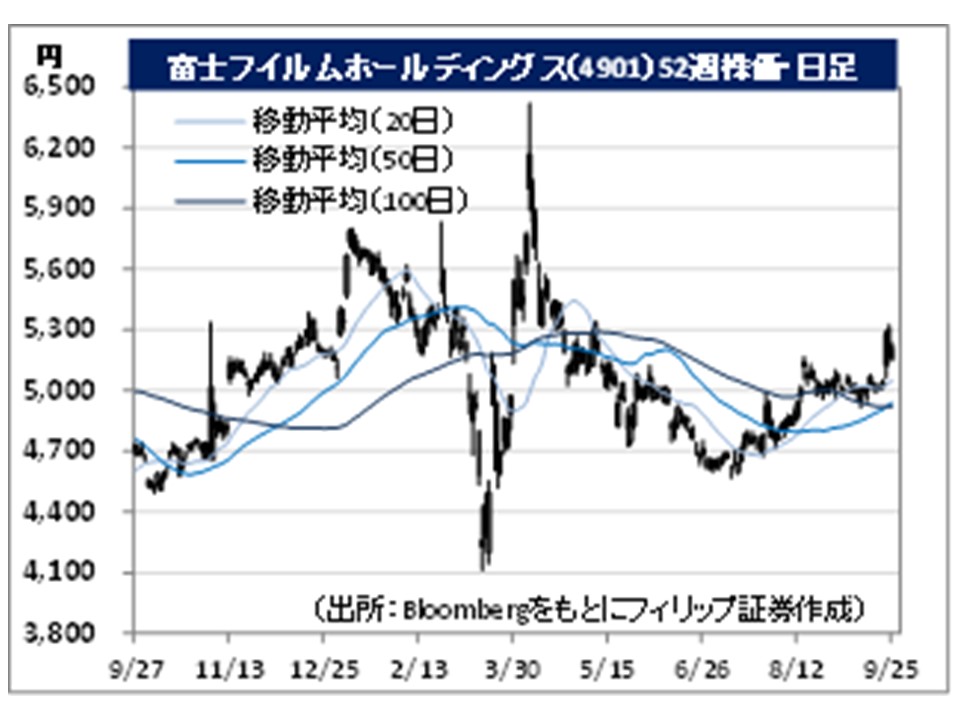 ・For 1Q (Apr-Jun) results of FY2021/3 announced on 13/8, net sales decreased by 14.8% to 456.27 billion yen compared to the same period the previous year and operating income decreased by 45.1% to 20.39 billion yen. Due to the impact of the regulations on going outdoors and the closure of stores following the COVID-19 catastrophe, the decrease in sales, such as camera products, etc. had affected. Due to the conversion of Fuji Xerox to a wholly-owned subsidiary, net income increased by 87.6% to 27.501 billion yen.

・For its full year plan, net sales is expected to decrease by 5.0% to 2.2 trillion yen compared to the previous year and operating income to decrease by 25.0% to 140 billion yen. Excluding the impact from the COVID-19 catastrophe and foreign exchange as well as temporary expenses for a structural reform, there has been an increase in income and profit compared to the previous year. Their subsidiary, FUJIFILM Toyama Chemical, achieved the primary endpoint in phase III domestic clinical trials for Avigan, a candidate for the cure for COVID-19. Attention is on the application for the approval to manufacture and sell Avigan that is planned for mid-October 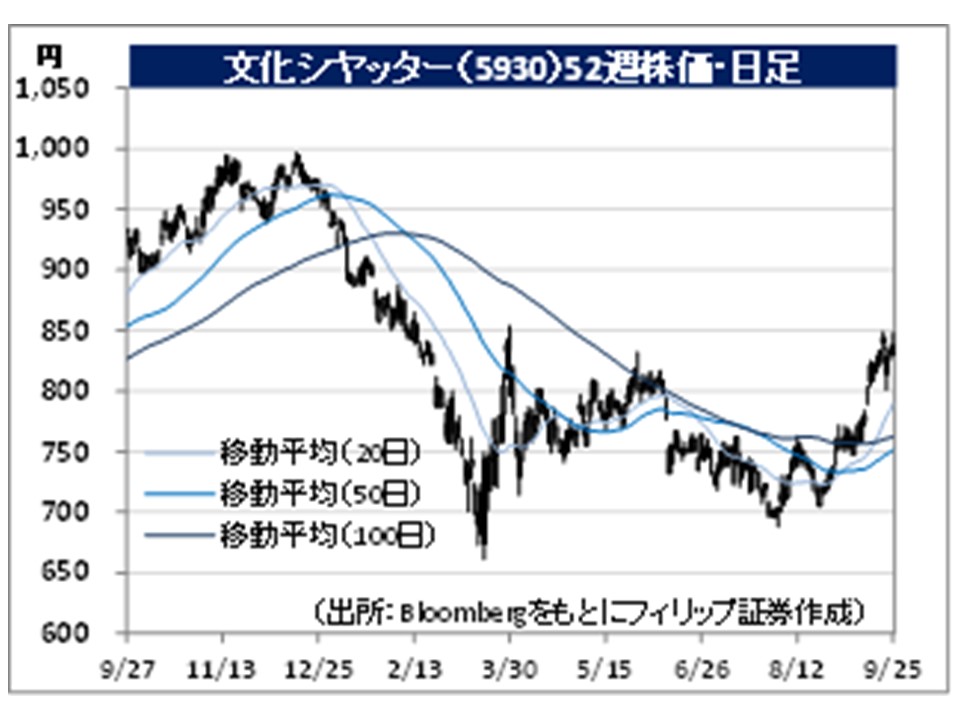 ・Established in 1955. Their main business content involves the manufacture and retail as well as the maintenance/inspection and repair of building materials for buildings and housing, shutters, and housing renovation. Company is currently strengthening their water stop business which handles facilities for flood prevention as a countermeasure for guerrilla rainstorms.

・For 1Q (Apr-Jun) results of FY2021/3 announced on 4/8, net sales increased by 1.3% to 37.197 billion yen compared to the previous period and operating income increased by 6.0 times to 410 million yen. A revenue increase in their mainstay shutter-related products and building materials-related products businesses, as well as the operating profit or loss for the building materials-related products business coming out of deficit from (380) million yen the same period the previous year have contributed to their business performance.

・Their full year plan is undecided due to the present difficulty in reasonably calculating the impact of COVID-19. Apr-Jun net sales for their “other businesses”, which include their water stop business that handles flood prevention facilities, increased by 1.5% compared to the same period the previous year. With concerns of flood damage, such as from the occurrence of the heavy rain in Kyushu in July this year and the extremely large-scale and strong Typhoon Haishen which approached Kyushu in Sep, there will likely be expectations for an increase in the social reputation of the company’s businesses