Japan-Weekly Strategy Report A Reevaluation of Japanese Stocks and A New Way of Life May 19, 2020 457 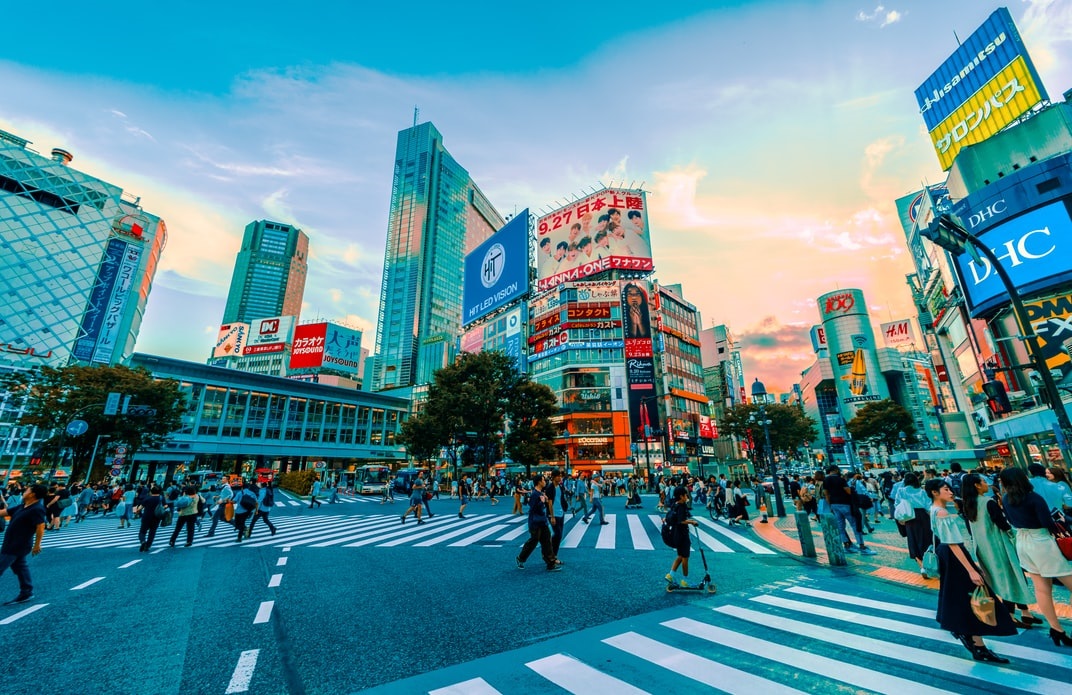 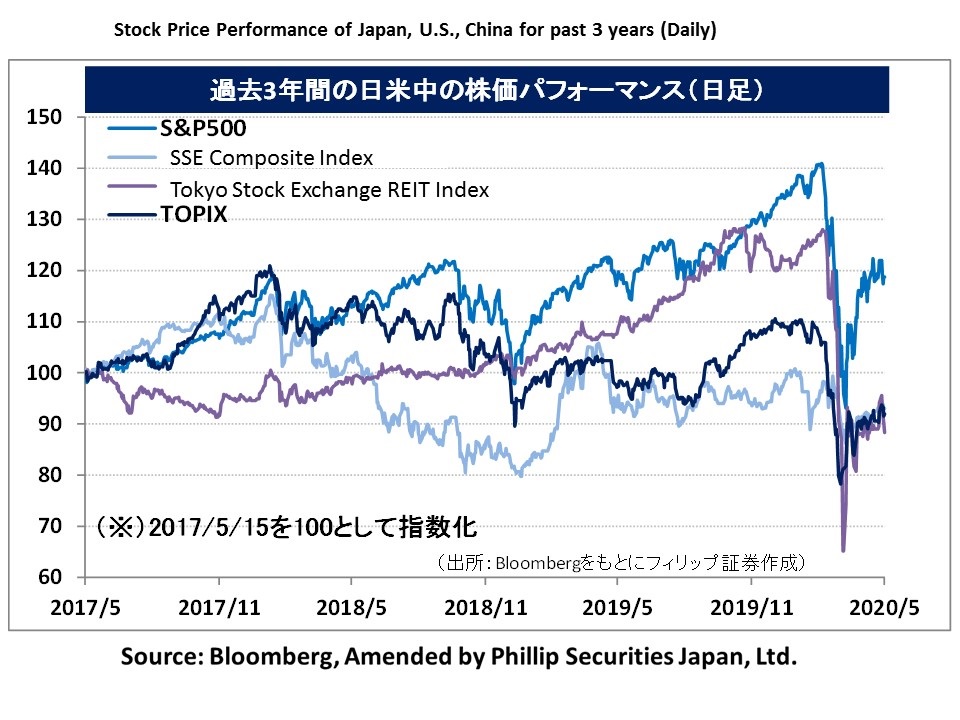 A Reevaluation of Japanese Stocks and A New Way of Life

On 14/5, the Japanese government decided to lift the state of emergency for 39 prefectures. Major overseas media reporting positively on Japan’s response, such as “despite reasons unknown, their measures have seen relative success” and “Japan has taken a major step towards reopening the economy”, seemed to have lowered the hurdle for investment in Japanese stocks when viewed by foreign investors. Furthermore, it was said that the government would make a cabinet decision on the 2nd supplementary budget on 27/5, which in addition to the “maintenance benefit” and the “special fixed benefit” that have already begun paying out, is predicted to roll out support measures, such as capital support for medium and large-sized enterprises, an increase in the employment adjustment subsidy, rent support for tenants as well as student relief, etc.

With regard to the unprecedented crisis of the Japanese economy and the lifestyle of its citizens, from the viewpoint of fiscal discipline, there have been no criticisms of “the increased usage of funds for welfare”, and by sharing the sense of crisis felt by its citizens, perhaps there is a growing mood of “doing everything possible”, “implementing it large-scale” and “paying out quickly”. In the past, during the depression from the strong yen after the Plaza Accord in 1985, the adoption of strong economic policies against the backdrop of a similar sense of crisis towards the sinking of the Japanese economy, turned out to be a factor for encouraging bubble prices to the stock market after. Although circumstances then differ from now, strong policy response following deeper sharing of the sense of crisis felt by its citizens could increase the likelihood of bubble prices occurring.

Also, with the U.S.-China opposition assuming a reignited aspect over who is to be responsible for the spread of COVID-19, as a reflection of the intentions of the U.S. Trump administration, it was announced on 13/5 that the Federal Retirement Thrift Investment Board, which runs the pension fund for U.S. federal agents, would postpone the investment of Chinese stocks. There is a high possibility that countries other than China which have the potential of becoming the leader in Asia would serve as the substitute for the investment of Chinese stocks by global investment funds. Based on this as well, we can say that the environment is becoming more favourable for investors to want to invest in Japanese stocks.

As basic infection prevention measures for the individual in “The New Way of Life” announced by the Ministry of Health, Labour and Welfare on 4/5, the enforcement of ensuring physical distance, wearing masks and washing hands were indicated as practical examples, and on 14/5, guidelines to prevent the spread of COVID-19 in the industry were compiled for respective industries. Amongst those, recommendations such as changing the practice of having the customer take their portion of bread at the supermarket to selling them pre-packed in packets or bags, as well as installing acrylic boards to separate diners sharing the same table, etc., favoured the use of products made from petroleum fossil fuels, which have been viewed negatively thus far from the aspect of harming the environment. As “The New Mode of Life” becomes more commonplace, perhaps there could be increased reevaluation of low P/B ratio stocks which were disregarded as cheap and abandoned by the times up till now. 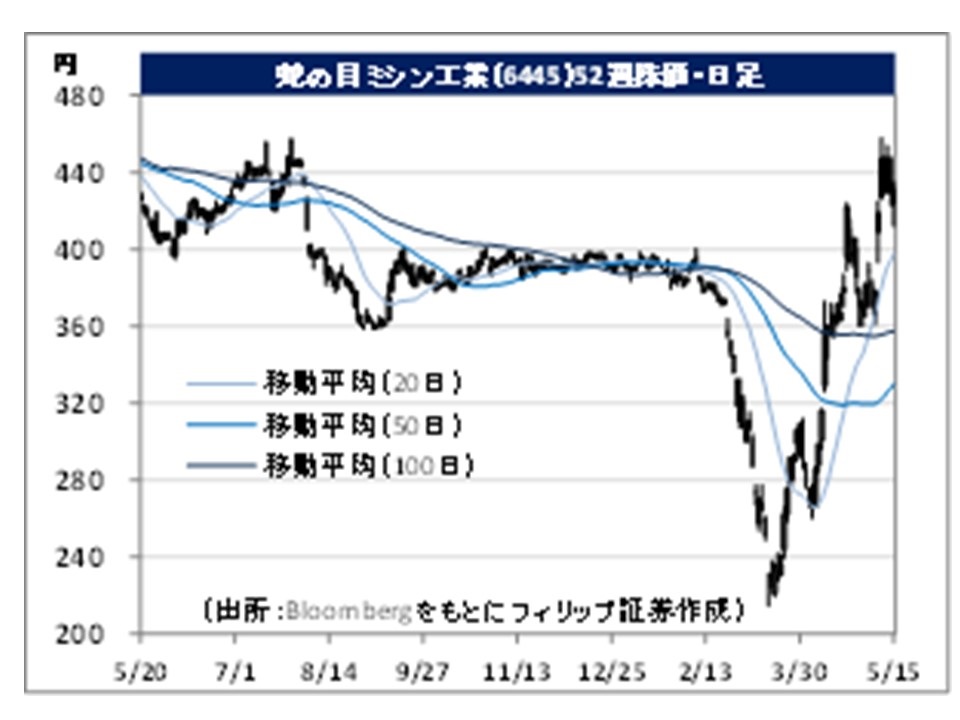 ・Established in 1921. With a focus on the household appliance business which deals with home sewing machines, embroidery machines and the related software, the company also manages the industrial machines business which develops and manufactures desktop robots, etc., and the IT business involving IT software and information processing services.

・For FY2020/3 results announced on 13/5, net sales decreased from 6.9% to 35.521 billion yen compared to the previous period and operating income increased by 0.7% to 1.158 billion yen. Operating income increased by 57.1% compared to the company plan. With the global rise in self-restraint from going outdoors, increased interest in handmade masks using a sewing machine due to a lack of masks has proven to benefit home sewing machines.

・Company has not decided on their forecast for FY2021/3 due to difficulties in reasonably calculating effects from the spread of COVID-19. Even after the government lifts the state of emergency, as a “New Way of Life”, it would encourage people to wear masks even without symptoms as a basic preventive measure, and the sales expansion of home sewing machines domestically and overseas due to the rising interest in handmade masks could lead to the discovery of new potential demand. 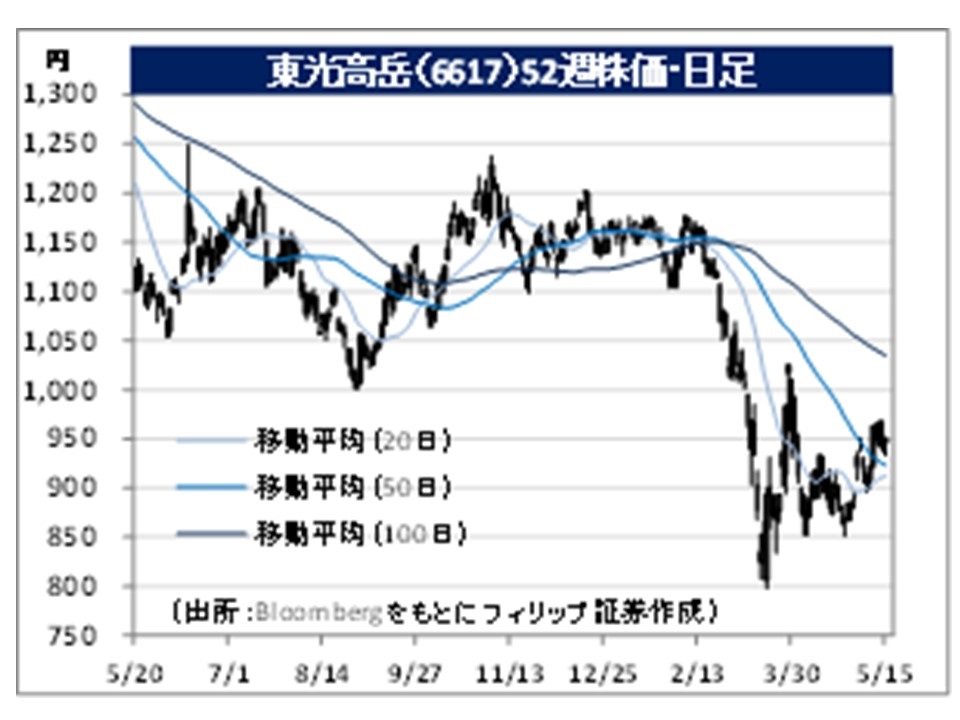 ・Established from a joint stock transfer between Takaoka Electric Mfg. and Toko Electric in Oct 2012, and merged businesses in Apr 2014. TEPCO Power Grid is their largest shareholder at 34.8%. The company’s main businesses include the power equipment business and the measurement business, etc.

・For FY2020/3 results announced on 27/4, net sales increased by 2.7% to 93.341 billion yen compared to the previous period and operating income decreased by 15.1% to 2.321 billion yen. Despite the Vietnam power equipment company becoming a group company in June 2019 which contributed to an increase in overseas construction work in the power equipment business, the decrease in revenue from smart meters in the measurement business affected, which led to a profit decrease.

・Company has not yet announced their forecast for FY2021/3 due to the uncertain future from COVID-19 effects. From Apr 2020, as a reform to power systems, it was made obligatory for power business operators to legally separate their power transmission and distribution section. As a power transmission and distribution business operator becoming independent from its parent company and under TEPCO Power Grid, who needs to reinforce the strength of the group, we can expect them to break into promising businesses fields, such as the user power data utilisation business, etc.