Japan-Weekly Strategy Report ”A Political Situation Starting to Stir and Economic Measures That Are Required” August 20, 2020 399 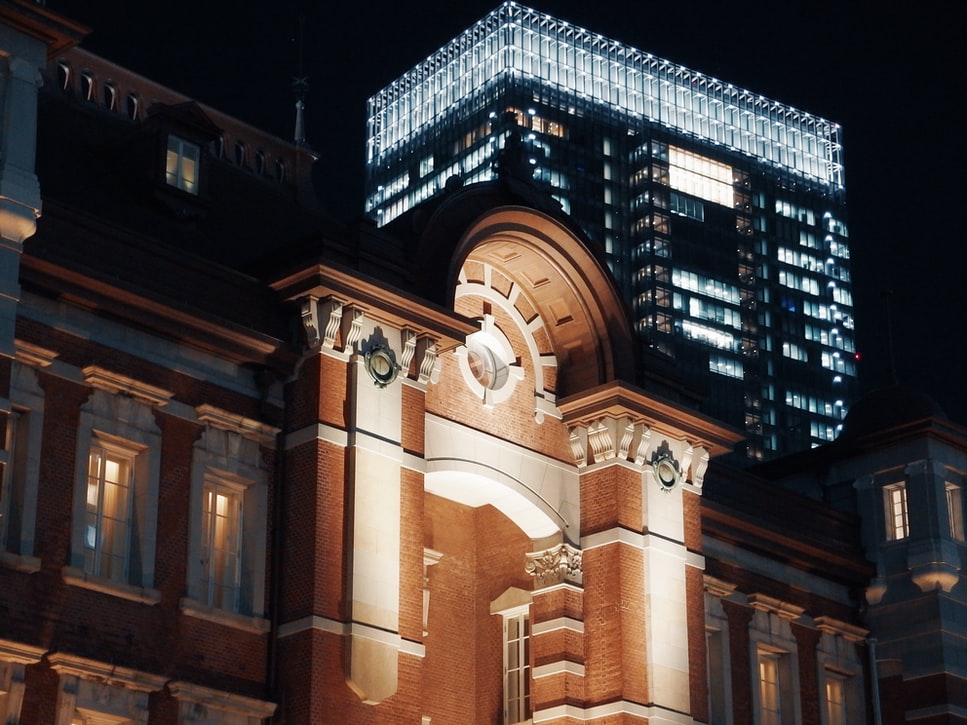 As mentioned in the 3rd August issue of our weekly report, “Is It the Time to Estimate the Point Where the Correction Phase Ends?”, 7/8 seems to have been a day which was an important turning point. The increase in U.S. nonfarm payrolls in the U.S. employment statistics for July announced on 7/8 exceeded market expectations, suggesting that movements of a recovery in the U.S. economy was not stagnating, and the U.S. long-term interest rate also shifted to an upward trend. For the Nikkei average, after falling to 22,204 points on 7/8, it shifted towards an increase, marking 23,338 points on 14/8. Although trends involving U.S. economic indicators and the U.S. long-term interest rate are considered important for Japanese stocks for the time being, Japan’s Apr-Jun GDP will be announced on 17/8. Although market focus appears to have already shifted towards the Jul-Sep GDP, even if the figures turn out to be bad, there is likely room to take it positively as an opportunity for the government to feel a sense of crisis and work on economic measures.

With there being about another 2.5 months until the U.S. presidential election in early November, following U.S. President Trump’s executive order to ban U.S. residents from carrying out transactions involving the Chinese video publishing app “TikTok” and the communications app “WeChat”, he has been coming up with strong policies in the economy and foreign policy towards the reelection, such as signing the executive order to  implement additional COVID-19 economic policies, etc. However, the growing importance of the political situation towards an election is the same for Japan. On 13/8, the Democratic Party for the People agreed to split effectively and merge with the Constitutional Democratic Party of Japan. Being aware of the possibility of a dissolution of the House of Representatives and a general election within the year, this appears to have been related to movements of a new party formation. Especially when considering the schedule of the expiry of the Liberal Democratic Party’s presidency term in September and the Jul-Aug Olympics and Paralympics, this is thought to be highly possible. Even if it were to dissolve within the year, there is the expectation of a high likelihood of the government being aware of the election and implementing even stronger

economic policies, which we can likely expect an influx of funds into the Japanese stock market.

However, if it comes to the situation where the spread of COVID-19 increases again and there is an official announcement to declare a state of emergency again, from the viewpoint of avoiding the “3 proximities”, there is a high chance that the election will be postponed. In particular, there is global concern regarding chaos from being infected with both influenza and COVID-19 from autumn onwards, hence, it is crucial that they as a government first prioritise measures to prevent influenza. Even if the election does not take place and the impact from the spread of COVID-19 persists, there will likely be a demand to raise the pace of increasing government spending, such as the COVID-19 sustained payouts, etc. In that sense, we can consider that a positive situation for the stock market is highly likely to result regardless whether the snap election will take place this year or not. For the time being, matters of concern which may influence the stock market are likely to be on the rebound from short-term over-buying of the stock prices of key U.S. IT corporations. 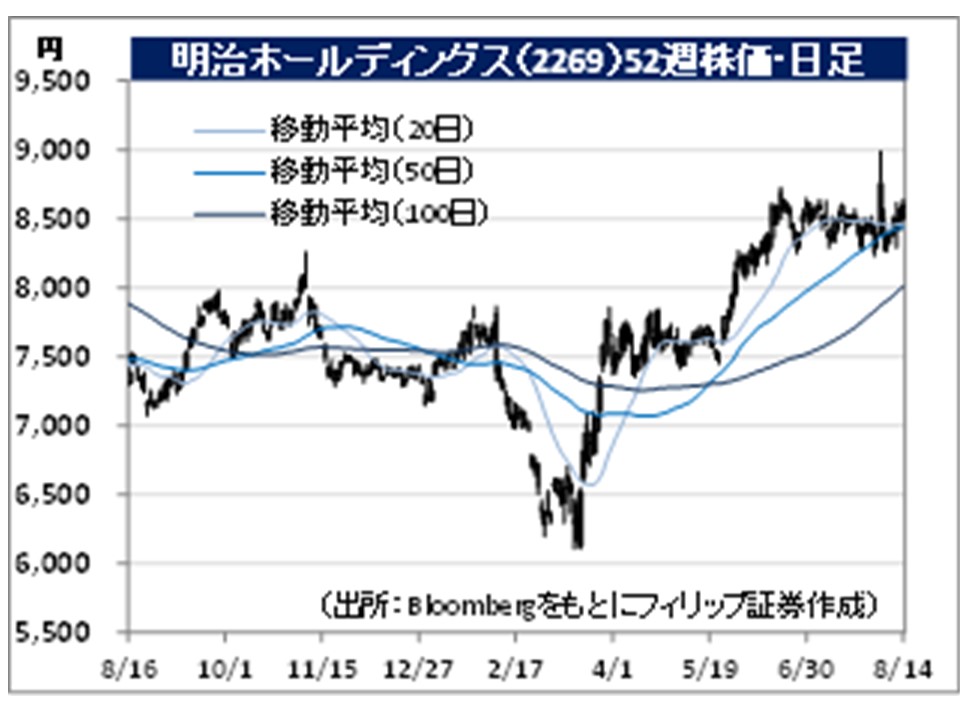 ・Established in 2009 from a merger between Meika Seika and Meiji Dairies. Manages two business segments, which are foodstuff and pharmaceuticals. KM Biologics, who inherited the pharmaceutical business, the Chemo-Sero-Therapeutic Research Institute (Chemo-Sero-Research), became their consolidated subsidiary in 2018.

・For 1Q (Apr-Jun) results of FY2021/3 announced on 12/8, net sales decreased by 5.9% to 281.167 billion yen compared to the same period the previous year and operating income increased by 12.2% to 23.161 billion yen. Despite an overall revenue decrease from a decrease in revenue in their confectionery business and 3 companies being excluded from consolidation due to the share transfer, a revenue increase such as in yoghurt, etc. and cost management, such as sales promotion expenses, etc. have contributed to a profit increase.

・For its full year plan, net sales is expected to remain unchanged at 1.253 trillion yen compared to the previous year and operating income to increase by 7.1% to 111 billion yen. With the predicted increase in demand for influenza prevention vaccinations across the world from the possibility of severe symptoms appearing when infected with both influenza and COVID-19, we can expect net sales to turn out better than the forecast (15.7% increase to 30.2 billion yen compared to the previous year) for the influenza vaccine handled by KM Biologics. 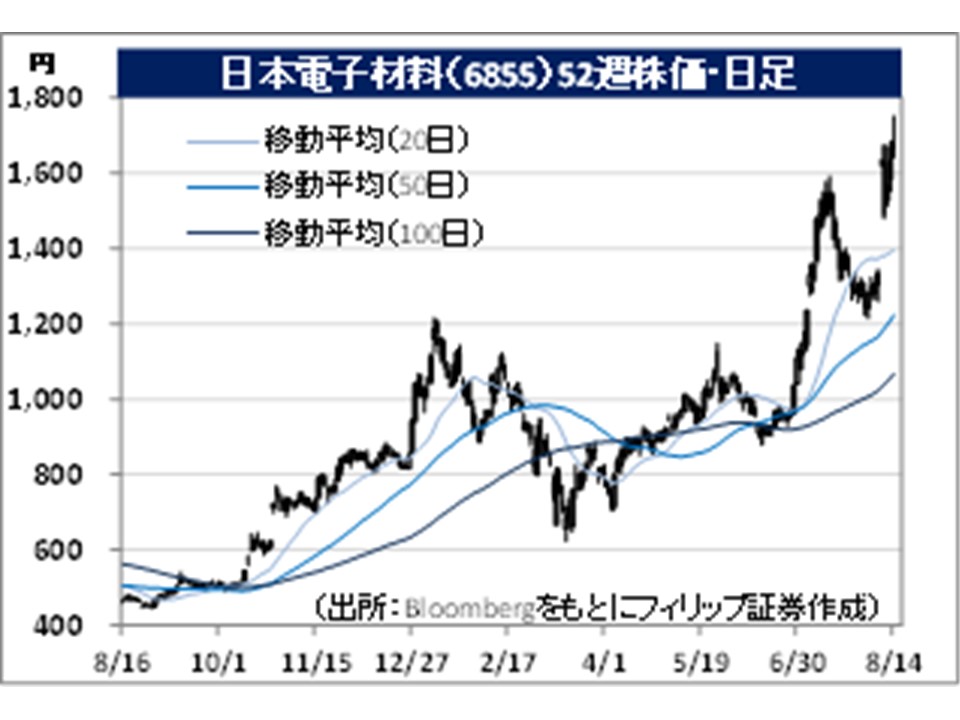 ・For 1Q (Apr-Jun) results of FY2021/3 announced on 6/8, net sales increased by 31.2% to 4.188 billion yen compared to the same period the previous year and operating income increased by 6.6 times to 804 million yen. As a response to the recovery of the semiconductor market which was supported by data centre-related investments, progress in sales promotion of products for memory IC, whose demand increased for PCs and servers, have led to an increase in their mainstay probe card.

・For its full year plan, net sales is expected to increase by 8.5% to 17 billion yen compared to the previous year and operating income to increase by 2.3 times to 2.3 billion yen. With attention on the miniaturisation of the circuit line width to 7 nanometres (nm) (a nano is 1/1 billion) in cutting-edge semiconductor technology, we can also expect a rise in the standard of technology requested for probe cards, which are essential in the process of the “wafer test” (quality goods test for manufactured IC chips) in semiconductor device production, hence, demand for the company’s technology is also likely to increase.