Japan-Weekly Strategy Report “4 Risk Factors That Will Pull the Rug Out From Under the Japanese Stock Market” July 8, 2022 57 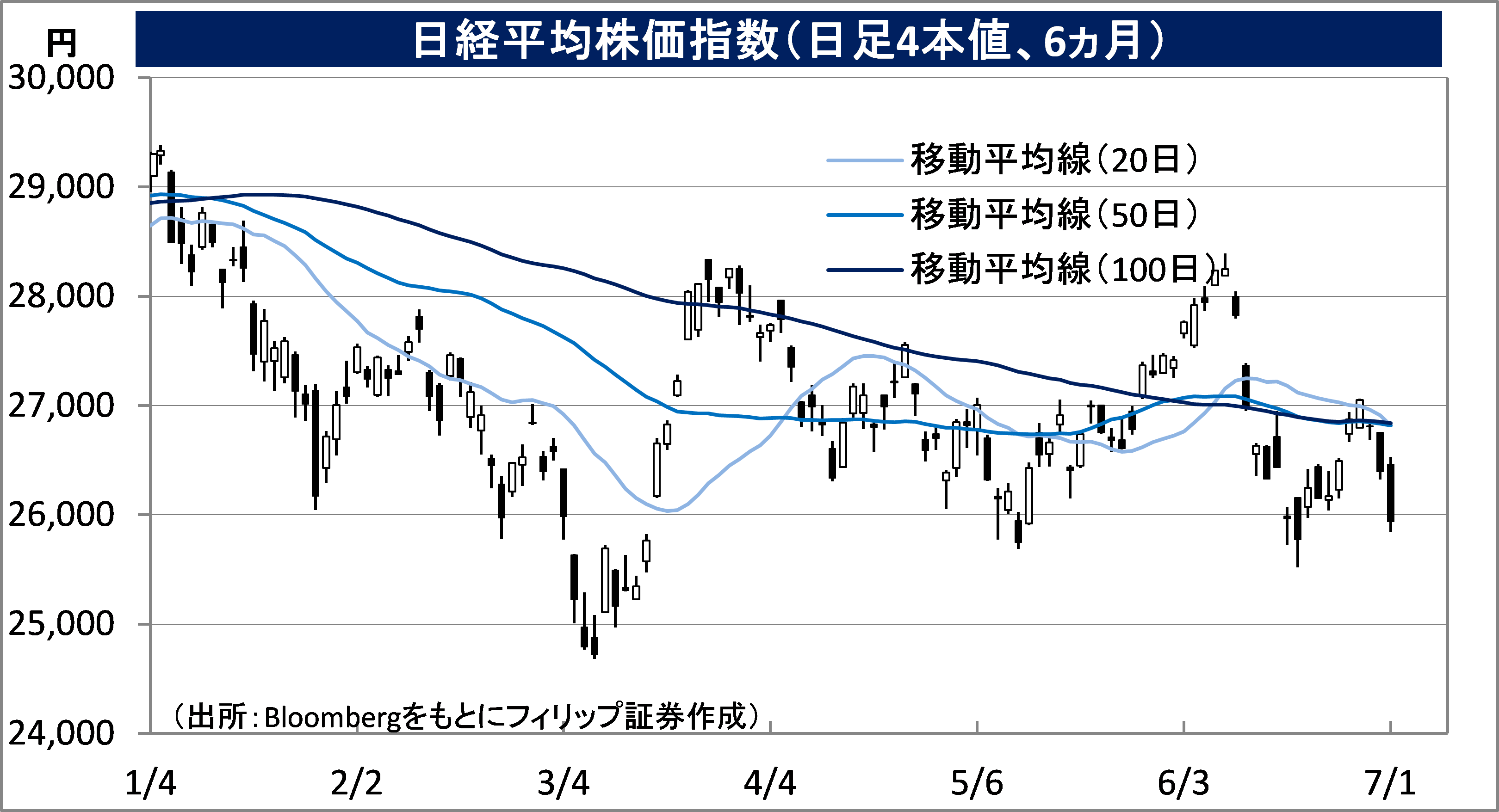 The environment concerning Japanese stocks of late has been gradually worsening. Developments that push up the Japanese stock market have been gradually fading, such as expectations on the Kishida administration after the House of Councillors’ election and expectations on inbound travel consumption from the resumption of accepting foreign tourists visiting Japan. The following 4 points can be considered to be main factors for this.

The first factor is doubts on the Bank of Japan’s monetary policies. With major countries of Europe and the U.S. reinforcing monetary tightening towards curbing inflation, the maintenance of monetary easing policies by the Bank of Japan is encouraging a depreciation of the yen. There are also benefits of the depreciation of the yen, such as pushing up corporate profits via export and it easily becoming an advantage for blue chip stocks which have high contribution to the Nikkei average. However, the term of office of the governor and vice governor of the Bank of Japan is until April next year, and depending on the intentions of the Kishida administration after the election, perhaps doubts will likely grow stronger in the market regarding the Bank of Japan also being forced to change its policies from “dovish” to “hawkish” similar to the Swiss National Bank as of late.

The second factor is the sudden worsening of the recent Japanese economic climate. The Indices of Industrial Production for May worsened significantly with a 7.2% decline compared to the previous month. The Japanese Ministry of Economy, Trade and Industry’s overall economic assessment for production went from “being at a standstill” to “bearish”. It appears that the negative impact from strict restrictions in going out in May in China have surfaced. Since the Purchasing Managers’ Index (PMI) for June announced by the National Bureau of Statistics in China increased from 49.6 in May to 50.2, Japan’s Indices of Industrial Production for June is expected to have a high possibility of rebounding as well, however, there is a lack of power in the range of increase in the said PMI and it is considered to be inadequate in order to push up the Japanese stock market.

The third factor is that the number of new COVID-19 infections is shifting towards an increase again. For Tokyo, at the infection status monitoring meeting on 30/6, it was said that the cautionary level, which is determined based on 4 levels, was raised by 1 level to the 2nd highest. There is a similar trend of an increase in new infections in the U.S. as well and the Omicron variants “BA.4” and “BA.5” have become the main. The U.S. FDA (Food and Drug Administration) has advised manufacturers to manufacture a vaccine to combat the variants and is leaning towards a viewpoint of making it mandatory to receive the 4th vaccination from this autumn onwards. In Japan, although Prime Minister Kishida has decided to establish a “Cabinet Infectious Diseases Crisis Management Agency”, a damper has been placed on travel and leisure, department stores and F&B outlets which have shown signs of recovery as of late, and concerns have emerged on the possibility of inbound travel consumption falling through as well.

The fourth factor is concerns of an intensification in the strained energy supply and demand. With the official announcement of a “warning of tight electricity supply and demand” due to record-level heat waves, regarding the Far East petroleum and natural gas development project “Sakhalin 2” which Mitsui & Co. (8031) has invested 12.5% and Mitsubishi (8058) has invested 10%, on 1/7, Russia’s President Putin signed a decree dictating a change to a Russian enterprise which will newly establish a business entity. It is concerning that risks have emerged on Japan’s entire natural gas supply losing approx. 10% as a result of this. 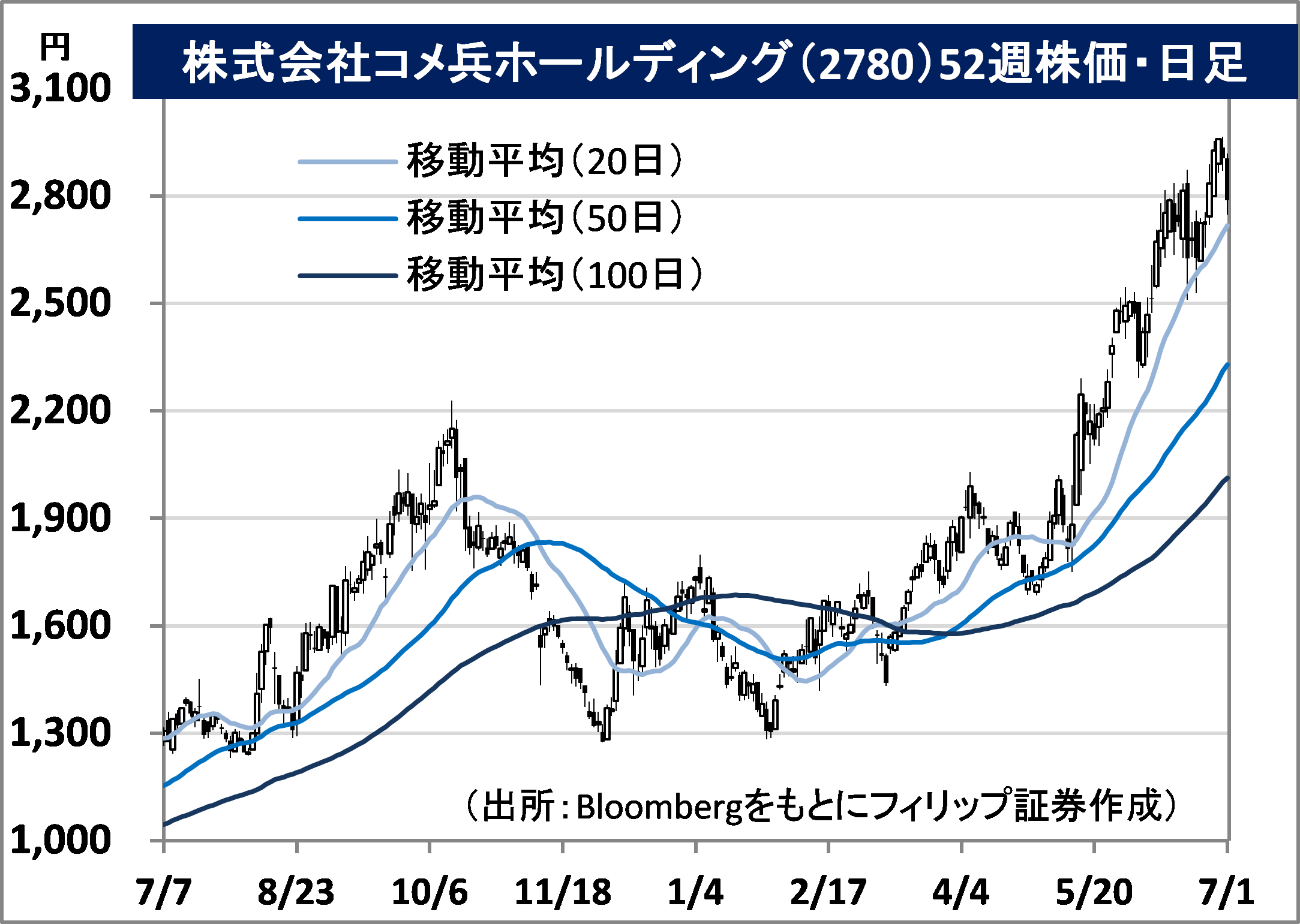 Founded a secondhand clothing store in 1947 in Osu, Nagoya City. Expanded to deal with secondhand items, such as gemstones, precious metals, watches, cameras and musical instruments. Operates the designer fashion business in Japan and overseas as well as the tyre / wheel business.

For FY2022/3 results announced on 13/5, net sales was 71.148 billion yen (50.723 billion yen in the previous year before the application of the accounting standard for revenue recognition) and operating income increased by 6.3 times to 3.714 billion yen. There has been success in reinforcing online auctions for corporations as well as online stores and events to secure merchandise in order to reinforce individual purchases after ensuring safety involving COVID-19 infection.

For its FY2023/3 plan, net sales is expected to increase by 9.6% to 78 billion yen compared to the previous year, operating income to increase by 1.8% to 3.78 billion yen and annual dividend to have a 12 yen dividend increase to 44 yen. With the market price of gold shifting within a high price, due to an increase in the sales distribution ratio of gemstones and precious metals, there was a continuous increase in revenue with monthly net sales for May having increased by 40.5% year-on-year. On the 28th, the U.S. Biden administration announced a ban on Russian-made gold. Russia’s gold is a mainstay export item after petroleum and natural gas. 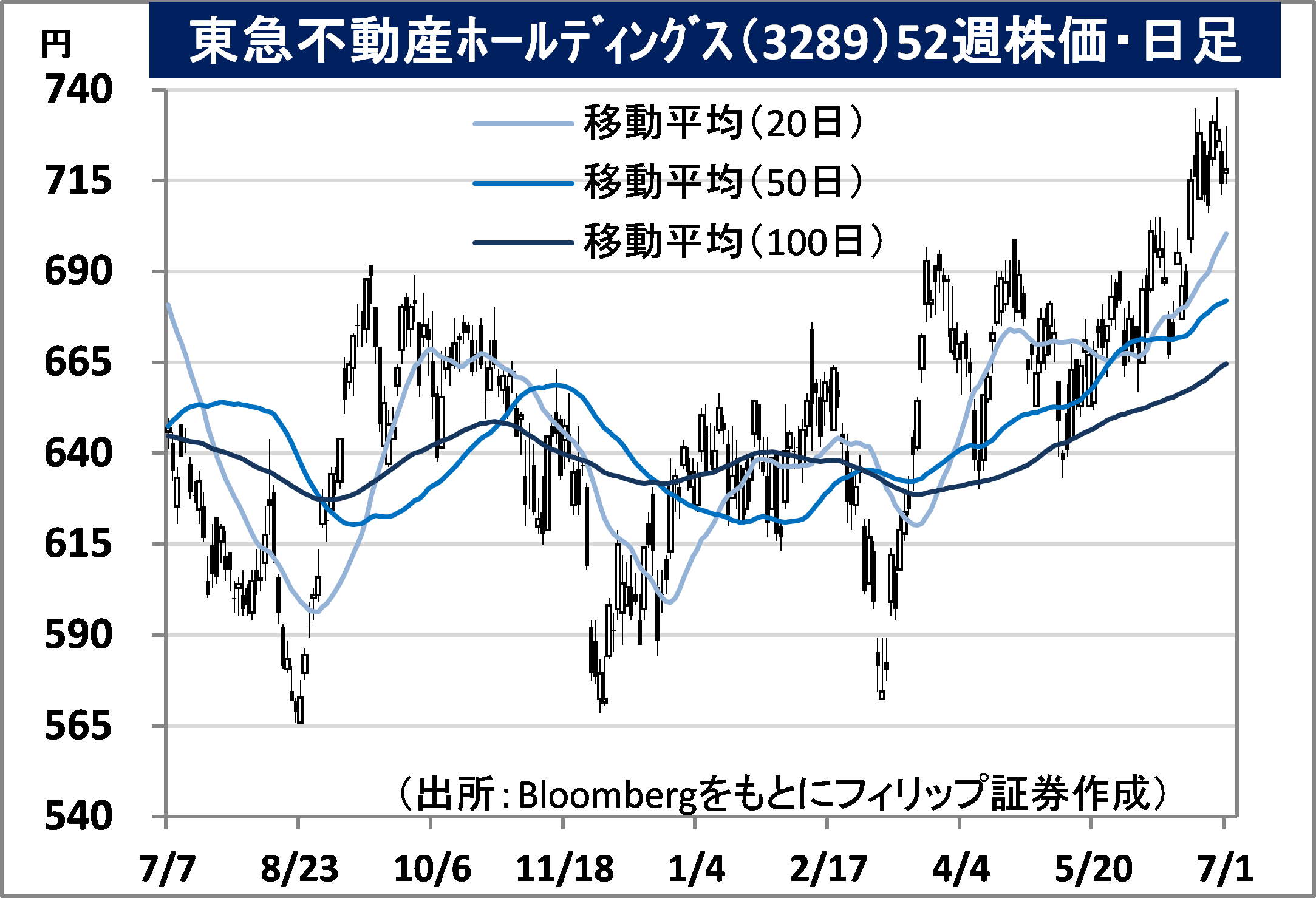 A general real estate company under the Tokyu (9005) group. Tokyu Real Estate went independent from Tokyu in 1953. Due to the joint share transfer method in 2013, it was established as a wholly owning parent company of Tokyu Livable, Tokyu Community and Tokyu Land.

For FY2022/3 results announced on 11/5, net sales increased by 9.0% to 989.049 billion yen compared to the previous year and operating income increased by 48.3% to 83.817 billion yen. A declaration of a state of emergency was issued in response to the spread of COVID-19 in the previous year and there was an increase in income and profit from a reaction which had limited impact compared to significant limitations on businesses that arose from the reduction of operating hours and the suspension of businesses of commercial facilities, etc.

For its FY2023/3 plan, net sales is expected to increase by 1.1% to 1 trillion yen compared to the previous year, operating income to increase by 7.4% to 90 billion yen and annual dividend to have a dividend increase by 1 yen to 18 yen. Foreign tourists have begun to be accepted following the easing of entry restrictions to Japan from 10/6. There is expected recovery, such as in “hotels” and “leisure” in the operation management business. The company owns multiple hotels and ski resorts in Niseko, Hokkaido. They will likely gain attention if Sapporo is chosen as the city for hosting the 2030 Winter Olympics and Paralympics.