Java is still the driving force where INTP posted sales growth of 6.64% YoY, though its growth was surpassed by Bali & Nusa Tenggara’s of 8.78%. Those are the only two sales areas that reported positive sales growth. Sales in Java mainly driven by an increase in cement sales in East Java (19%), Central Java (11%) and West Java (10%). On the other hand, the biggest decline in cement sales occurred in Eastern Indonesia (-24%) and Kalimantan (-5.5%).

National Cement Consumption in 2017 reached 66.35 mn tonnes (+7% YoY) on the back of the ongoing and completed massive infrastructure development projects, such as Trans Java & Trans Sumatera Toll Road, Cross Country Border Posts (PLBN), dams and bridges among others, which is reflected by the sturdy growth from bulk cement consumption (+10.6% YoY). Meanwhile, bag cement demand rose by 6% YoY corresponding to moderate increase of bag cement demand by property sector supported by the government’s 1 mn housing program. Ministry of Public Works & Public Housing (PUPR) through General Directorate of Housing Provision (Ditjen PP-PUPR) reported that the program has built 99,589 housing in 2017 and cumulatively reached 904,758 housings until the end of last year. 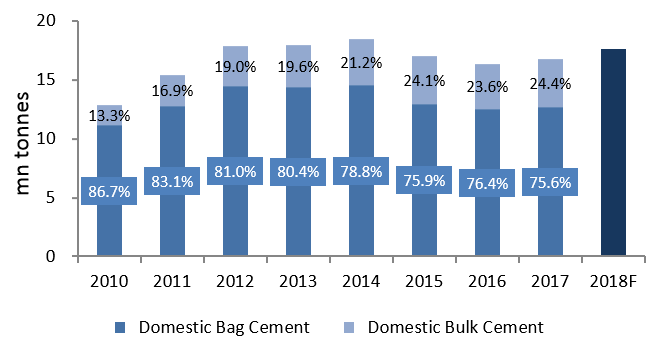