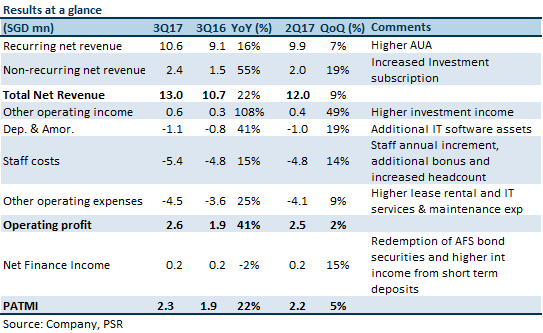 + Positive 0.9% jaws ratio in 3Q17 compared to 3Q16. Staff costs to net revenue is lower in 3Q17 at 41.8% compared to 44.5% in 3Q16 offset by higher other operating expenses to net revenue in 3Q17 at 34.4% compared to 33.5% in 3Q16. Other operating expenses increased 25.4% YoY in 3Q17 due to higher rental in China following the opening of the new Shanghai office in 3Q16, higher rental in Singapore from the additional office space in Singapore effective July 2017 and increase in IT services and maintenance, bank charges and brokerage costs.

We see continued strength in AUA growth through net sales as investors’ risk appetite is supported by improving economic sentiments and better clarity in geopolitics. As we have observed in 2016, iFAST’s performance had been more affected by macro uncertainty than by ephemeral market volatility. As long as investors are increasing their allocation into investment products instead of staying on the side, we could expect sequential improvement in its operations.

iFAST has been strengthening its partnership with FAs though minority stakes in FA firms. These partnerships improve iFAST’s B2B sales funnel and develop new sales verticals such as the provision of IT solutions to the FA firms and institutional clients. The provision of IT solutions helped increase 3Q17 non-recurring net revenue by 54.7% YoY. 3Q17 minority stake investments are RAF Holdings Pte Ltd, a FA firm in Singapore and Beijing Financial Alliance Technology Co Ltd, an FA consultancy and advisory firm in China. 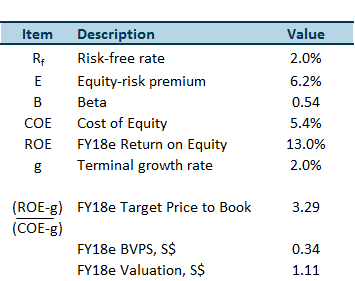 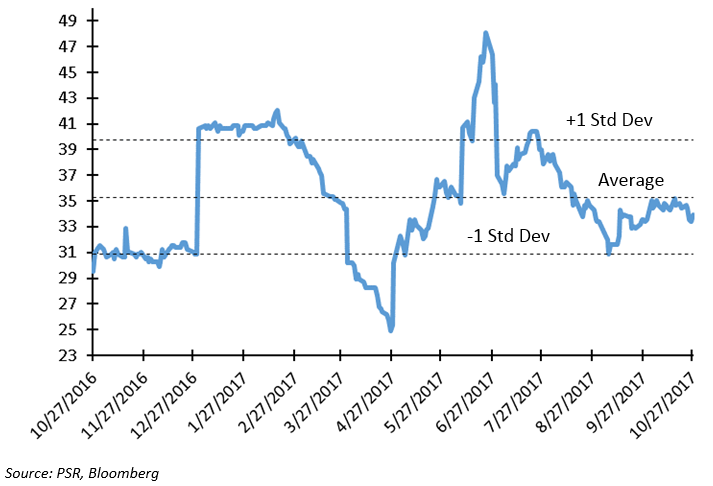 Maintain “Accumulate” rating with unchanged target price of S$1.11, based on Gordon Growth Model as we roll over to FY18e valuations. Previously, target price was pegged at 34.3x PE ratio based on FY17e EPS of 3.25 cents. We have changed our valuation method to Gordon Growth Model because iFAST does not have debt so its ROE is a strong indication of how efficient its shareholder equity is deployed.