Including the recently bagged contract worth S$1.1 billion involving development works at Changi Airport via a 60:40 JV, HLSH has a total of four civil engineering projects with a net order book of S$963 million which will last to 2020. Moving forward, we are of the view that a blended gross margin of 5% (higher than our initial estimate of 3.5%) is achievable from the Civil Engineering segment. However, as gross margins have continued to decline considerably across the years amid the highly competitive landscape, the Group will be unable to sustain prior years’ dividend payments in the absence of contribution from the property development segment since The Skywoods have been completely sold in July 2016 while the recognition of revenue from Shine@Tuas would only occur after the industrial property is completed in FY18.

Strength in balance sheet fuelled by an abundance in cash; 75% of cash will be dedicated for working capital of Civil Engineering projects and development cost for Tuas@Shine

After the repayment of loans amounting to S$60 million from the Group’s JV Company where it was primarily involved in the development of The Skywoods, HLSH’s cash position has ballooned to S$202.6 million where its current cash position is currently standing at the highest since its listing in 2009. However, we are expecting the Group to stand by c.75% of its cash position as working capital for its existing Civil Engineering project (10% of order book – S$96.3m), and development costs for Tuas@Shine (30% of projected development costs – S$52.9m). Consequently, it is unlikely for the Group to utilise its remaining cash to pursue significant acquisitions for growth in at least the next few quarters, or maintain its historical dividend pay outs.

While we acknowledge that there are headwinds in the Civil Engineering and Property Development sectors, where the two sectors are the key drivers for HLSH’s earnings, we are of the view that the bottoming of its earnings is in sight i.e. FY17. Additionally, the strength of its balance sheet helped by a rich cash position (net cash position of S$187.1 million) will allow the Group to be self-reliant on internal resources and help it to tide through the current challenging climate. We have upgraded our rating to “neutral” along with a higher TP of S$0.38 based on FY16’s full-year SOTP valuation. 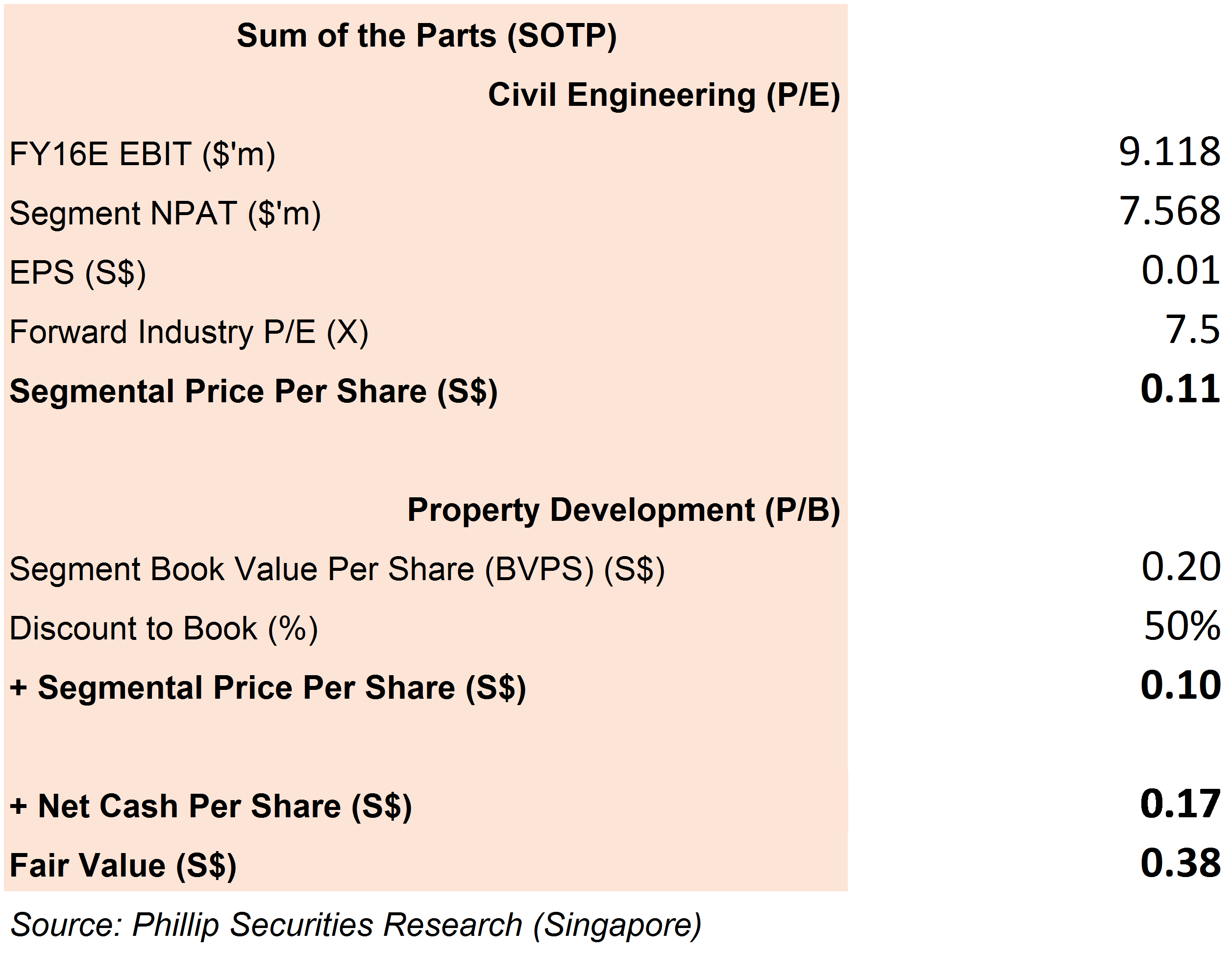