+ Stable recurring income portfolio continues to buffer earnings in absence of development income. Excluding the effects of acquisitions and divestments in 2017, we estimate the recurring income rental portfolio would have managed a c.3.7% YoY gain. Largest contributor to recurring income remains The Metropolis, a Grade A office in Buona Vista  which contributes slightly >50% of total rental income by our estimates.

+ Recovering sentiment in high-end properties presents monetisation possibility for Sentosa properties. In a more optimistic change of tone vs previous quarters, management expressed the possibility of capitalising on the improved market sentiment and interest in high-end market. After falling 17 consecutive quarters, property price index for core central region properties recovered 1.7% since 2Q17. We have factored in capital values of S$1,500psf for the Group’s Sentosa properties in our RNAV calculation, which is in the lower end of the S$1,417-S$2,212 range transacted prices for these projects in the secondary market from 2017.

– Impairment loss of S$16.8mn for JV project, Cape Royale in Sentosa. As a result, the Group reported net loss of S$4.4mn from jointly controlled entities in FY17.

Outlook for the Group’s recurring income portfolio is stable. We estimate close to 20+% of leases in Metropolis could be expiring this year, most of which were the first batch of leases signed 5 years ago when the offices first opened. We estimate positive rental reversion at least in the mid-single digits. The recovering sentiment in the Singapore residential market bodes well for any re-launch possibility for HBL’s three condominiums in Sentosa, currently held for rental. Our assumed capital value is at the lower end of the transacted price range since 2017. Successful re-launches above our assumed S$1,500psf capital value will be catalysts for an upgrade in RNAV.

HBL trades at a 45% discount to NAV, below its post GFC average P/NAV of 0.63. We like it for its stable recurring income and undervalued high-end property portfolio. FY17 recurrent income is c.S$147mn per year, sufficient to cover 2.8x FY17’s S$53mn ordinary dividend (8c/share) per annum. 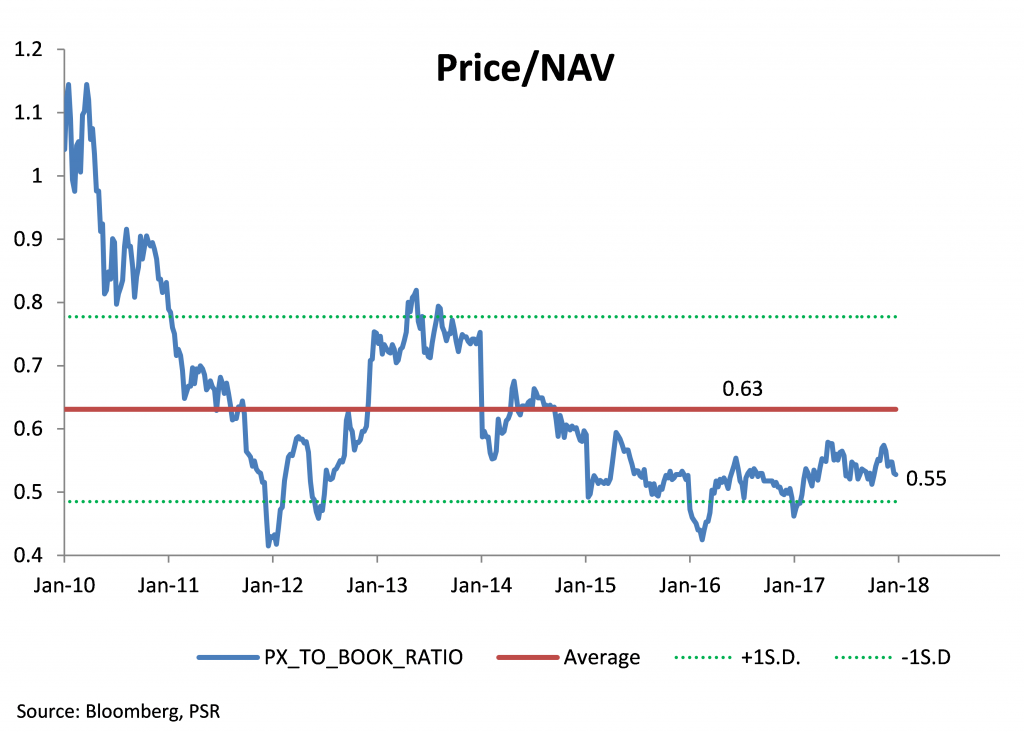