We expect both hospitals to continue to grow patient volume and average bill sizes with: (i) 14% additional new bed capacity by 1H FY18; (ii) new hospital extension block at Regency which will more than double Regency’s capacity by end-FY20.

We maintained our FY17F gross margin at c.33% despite a higher staff costs in 3Q FY17. We expect the Group to continue its recruitment drive in the coming two quarters in tandem with the new wards opening in MMC and RSH.

However, the higher staff costs will be offset by increased revenue intensity as HMI expands its range of specialist healthcare offerings, improve its facilities and infrastructure. In addition, the consolidation in the ownership of both MMC and RSH to 100% would increase scale, enable HMI to further optimise operating leverage, better management of cost pressures, such as rental, purchasing cost and staff cost.

We think that the RM120.9mn cash position, coupled with a strong cash flow generated from its operating activities (c.RM20 mn per quarter), will enable the Group to achieve its target to par down half of the consolidation debt by end-2017 (end-1H FY18). The next major capital expenditure will be the construction cost for the new hospital extension block at Regency which is estimated to be c.RM160 mn, and will be funded by internal cash resources and bank loans.

Note that earnings from both hospitals will be fully attributable to equity holders starting from 4Q FY17. We expect 4Q FY17 core PATMI to contribute RM12.9 mn, bringing the full year core PATMI to RM34.5 mn, which 12% higher than our previous forecast.

We remain cognisant of:

Our target price is an implied 35x FY18F PER.

Ringgit weakened at an accelerated pace over the past two quarters, dampened consumer sentiment; local patients were in cautious spending mode

Patient mix in 3Q FY17 remains unchanged with 21% of total patient load being foreign patients. However, there is a shift in type of services local patients obtained – more outpatient services than inpatient services.

Nonetheless, we think consumer sentiment should improve as Ringgit strengthened slightly since March 2017 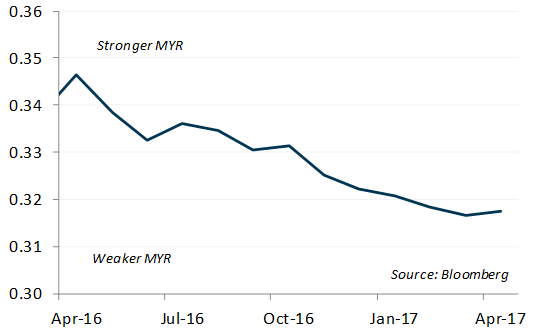