Potential solutions for restructuring of the MTN

By end of FY16, Geo was carrying SG$100mn (US$68.7mn reflected on the balance sheet) of debt, Medium Term Note (MTN), which will be due on Jan-18.  This amount will be reclassified under current liabilities after 1Q17. Geo plans to optimise the capital structure in order to achieve long-term growth in FY17 and the ongoing expansions such as acquisition of coal mines and capacity ramp-up demand cash hoard. The management eased the concerns on how the Group plans to deal with the MTN by signaling several potential feasible solutions:

1) Issuance of a new bond to repay MTN, 2) Extension of MTN, 3) Partial payback of MTN and roll-over of the remaining. It is expected to reach the final settlement in next 2 to 3 months. If there are no updates, Geo could possibly pay off the MTN on the due date next year.

In terms of solvency, the Group is capable to repay the full amount. As of Dec-16, Geo held US$63mn of cash. The upcoming CAPEX is the US$90mn for TBR mine acquisition, US$30mn of which will be paid in FY17, and the rest US$60mn will be gradually repaid afterwards. We expect the group will generate cash from operation amounted to US$81mn in FY17, which is in line with the management’s expectation of c.US$18mn to US$20mn EBITDA per quarter.  Furthermore, Geo will secure another offtake to receive prepayment by this year end. (US$40mn for 7mn tonnes of coal sales in FY16 as a reference).

In FY16, the geographic breakdown of sales is shown below. The sales concentration in China is owing to the establishment of both branding and marketing in the largest coal market. Moving forward, Geo will increase the sales in the domestic market in Indonesia, including exploring the opportunity to supply thermal coal directly to power plants through Perusahaan Listrik Negara (PLN), the government-owned electricity distribution corporation in Indonesia.  Accordingly, we expect Geo could have a better offering price for the sales of coal. 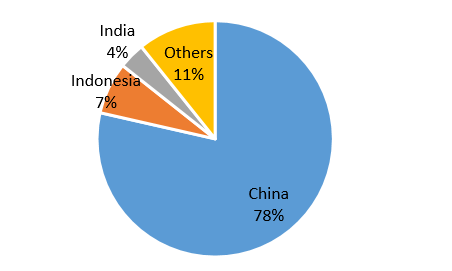 Since coal price is beyond Geo’s control, the efficient methods to enhance profitability are either boosting sales volume or reducing costs or both. Apparently, the Group has been actively lifting up sales through more offtakes, and meanwhile, it will continue to maintain the cash cost at c.US$26/tonne (based on 10mn tonnes of sales target) that contains the variable costs generated in the  subcontract to BUMA,  the second largest mining services company in Indonesia.

“Report On The Work Of Government” announced in the National People’s Congress and the Chinese Political Consultative Conference recently disclosed that in 2016 the curb on coal production capacity reached more than 290mn tonnes, surpassing the annual target of 250mn tonnes. In 2017, the central government aims to cut more than 170mn tonnes of coal production. We expect that the shortfall in supply side might not match with the reduction in coal demand. Therefore, we still believe the coal price will be stabilised at c.US$40/tonne (ICI 4,200 GAR) and the amount of coal import to China remains at the same level in FY17 as in FY16.