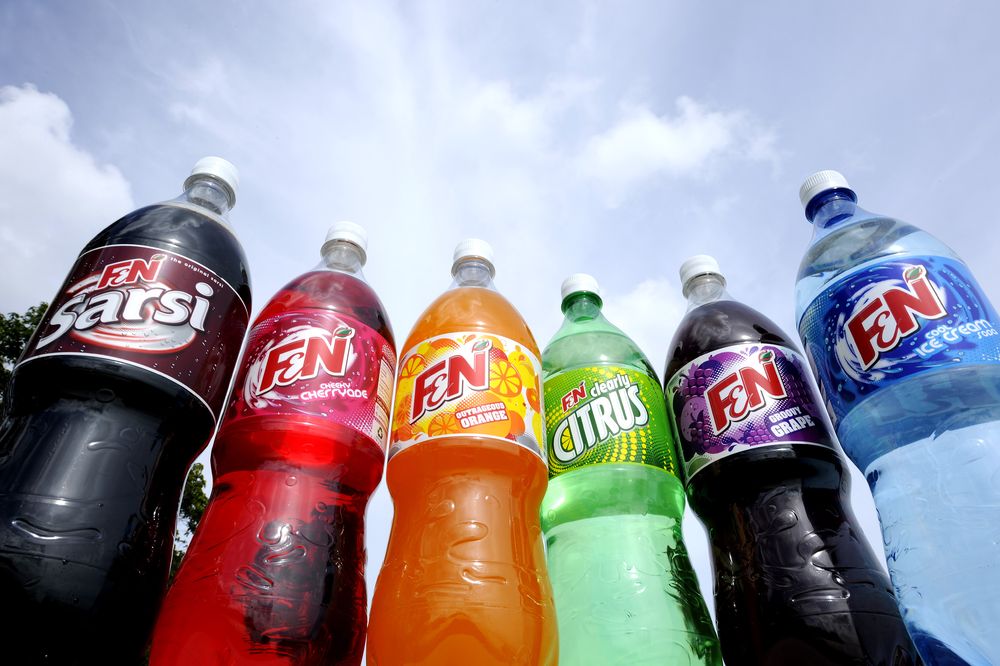 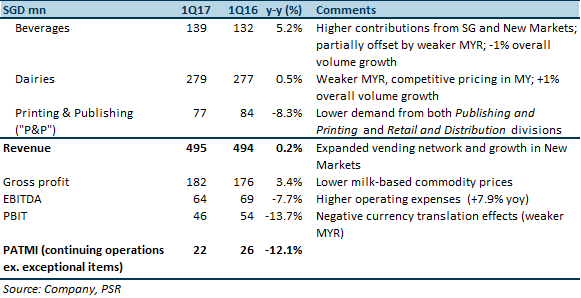 Operating environment in core markets remain challenging; Subdued topline growth as expected. Flattish year-on-year (“yoy”) growth in terms of overall sales and volume reaffirmed our view that Fraser and Neave, Ltd. (“FNN”) continues to face macro headwinds. We expect an unexciting topline growth of 1.5% for FY17 on the back of cautious consumer spending in its core markets (Singapore, Malaysia and Thailand), and in the absence of a new growth pillar.

Strong top-line growth from its New Markets. Beverages sales from Other Markets (includes Indonesia, Thailand, Myanmar and Vietnam) registered 240% yoy growth in 1Q FY2017. FNN shared that the strong growth was mainly driven by Myanmar and Vietnam, as a result of distribution expansion, marketing initiatives and promotions. We expect marketing costs to remain elevated as FNN continues to reinvest the proceeds into Vietnam and Myanmar for marketing activities.

Expects margin to remain under pressure. Higher operating expenses, intensified competition and increasing raw material costs (particularly sugar) will continue to weigh against EBIT margin. Possibility of a sugar “sin tax” implementation this year in Malaysia would further compress EBIT margin. The Health Ministry of Malaysia is considering imposing a “sin tax” on imported or locally processed sugar-sweetened beverages. Nonetheless, barring implementation of the policy, we do not expect FNN to increase soft drink prices to pass on the cost pressure to consumers amidst a backdrop of intensifying competition.

FNN has entered into a conditional agreement to acquire the sales and distribution offices of Penguin Random House Limited in Singapore and Malaysia with the intention to scale up the distribution business.

The deal hit a speed bump as the Competition Commission of Singapore (CCS) is conducting a public consultation on whether the deal would infringe the prohibition in the Competition Act against anti-competitive merger.

Printing & Publishing (P&P) segment contributed 15.5% of FY2016 Revenue and -2.9% of FY2016 EBIT. In view of a highly competitive market for book distribution, we do not expect a strong earnings turnaround for its P&P business in FY2017 should the deal went through.

FNN had increased its stake in Vinamilk from c.10.95% to c.16.35% through a competitive bid process on the Ho Chi Minh Stock Exchange (“HOSE”) in 21 December 2016. It subsequently further acquired 1.1% shares in Vinamilk via open market purchases in January 2017, taking the Group’s interest in Vinamilk to 17.5%.

We are generally upbeat on the increased stake in Vinamilk, as it will allow FNN to reap greater streams of dividend income and increase its foothold in Vietnam. The Group indicated interest in buying more shares in Vinamilk if opportunities arise.

We have adjusted upward our forecasted Beverages growth in FY2017 from 3% to 5%, on better than expected Beverages sales in New Markets and new agency brand, RIBENA. We have also updated our model to incorporate the acquisition of stakes in Vinamilk as well as a higher dividend income from Vinamilk.

We have also reviewed our FY17F EV/EBITDA multiple. In view that FNN’s EBITDA and earnings will be highly dependent on its Dairy business, we think that FNN should trade closer to its ASEAN Dairy peers at 15x instead of its simple ASEAN peers’ average at 11x.

We remain cognizant of:

We expect FNN to fund the acquisitions via borrowings and/or internally generated fund. As of 31 December 2016, the Company has a net cash position of S$166.2 million. The Group has plenty of headroom before hitting its net gearing ratio ceiling of 80%. 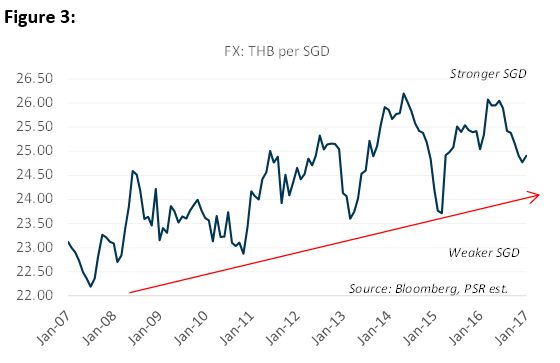 FNN currently trades at 28.6x FY17F PER, which is c.37% premium to its ASEAN Dairy peers’ 20.9x. We think that the premium valuation is not justifiable given the lacklustre macro backdrop and lack of significant growth catalyst.

It also has lower return-on-equity (ROE), as compared to its ASEAN peers.

These support our thesis of ‘Reduce’ rating.