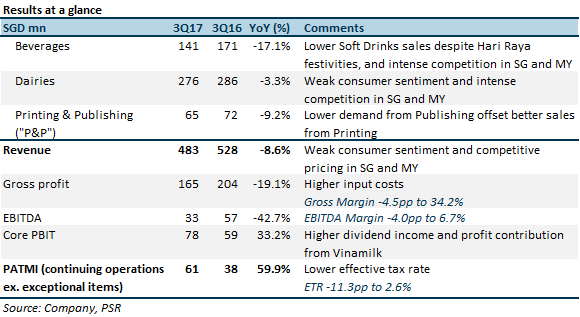 + Higher 9M17 Core PATMI despite lower revenue due to the reclassification of Vietnam Dairy Products Joint Stock Company (“Vinamilk”) as an associate company. The Group has increased both its stake in Vinamilk to 18.74% with representation of two directors on the Vinamilk Board. Vinamillk boosted profitability via (i) higher contribution of dividend income, and (ii) recognition of Vinamilk profit as associated company. Vinamilk paid out over 80% of its earnings to its shareholders in FY16 and has a track record of increasing dividend payout ratio over the past years. We expect a higher profit contribution from Vinamilk to boost Fraser and Neave’s (“FNN”) investment income this year as Vinamilk has posted 17% YoY growth in PAT to VND5.85tn for 1H17.

We expect a higher profit contribution from Vinamilk to boost Fraser and Neave’s (“FNN”) investment income this year as Vinamilk has posted 17% YoY growth in PAT to VND5.85tn for 1H17.

– Lower revenue from Publishing led to further PBIT losses in the Printing and Publishing business. Losses widened by 54.8% to S$2.7mn in 3Q17 despite being post-restructuring.

Outlook remains challenging against a backdrop of continuing cost and pricing pressure in Singapore and Malaysia. In particular, we maintained our view of subdued demand in Malaysia in FY17-18. The upcoming general election in Malaysia could dampen consumer sentiment and weigh against Ringgit’s strength. Possible implementation of a sugar “sin tax” in Malaysia is another risk to margins and sales volume.

We expect Dairies to continue to provide strong support to Group’s earnings. We are also optimistic that the New Markets, particularly Vietnam and Myanmar, would continue to gain traction and lift sales for both Beverages and Dairies businesses. Upside surprise could come from higher contributions from Beer and new vending business.

The State Capital Investment Company (SCIC) has recently announced its intention to further sell over 48mn (or equivalent to 3.33%) of Vinamilk shares in Oct-17.

Vinamilk commands about half of Vietnam’s domestic market share for dairy goods and has a steady earnings growth track record.