Refer to Appendix for ownership and trust structure.

+ Expanded ROFR pipeline to access Japan, China, Malaysia. OUELH will be granting FIRT a right-of-first-refusal (ROFR) to acquire any of its healthcare assets, subject to the completion of the proposed acquisition, which could pave inroads for FIRT to access geographies it currently does not have a presence in.

+ Potential improvement in tenant concentration risk management. Moving forward, this could also reduce FIRT’s reliance on LPKR as the single biggest lessee of its properties (83% of FIRT’s GRI in FY17). The existing ROFR pipeline from LPKR will remain.

+ Potential improvement in receivables with cash infusion into core tenant LPKR. The purchase consideration of S$144.8mn (incl. fees & expenses) for the 10.63% stake in FIRT will be paid in cash to LPKR. This could have a positive spillover effect into rentals owed by LPKR. FIRT’s receivables of S$29.1mn represent more than a quarter of FY17 revenue. As per our conversation with the Manager following this latest announcement, there had not been any delays on LPKR’s end for payments past their due dates.

Outlook has improved for FIRT’s receivables as the cash infusion into LPKR could potentially be used to pay outstanding rental owed to FIRT. This transaction only changes the ownership structure of the REIT and the Manager, and does not affect operations of the REIT. The expanded ROFR pipeline from OUELH would allow FIRT to pursue inorganic growth in other markets such as Japan, China and Malaysia. The existing ROFR from LPKR remains in place and is focused on Indonesia healthcare assets. Current gearing of 34.1% affords a debt headroom of c.S$82.9m (assuming 40% gearing) to pursue inorganic growth strategies.

No changes made to our forecasts as this transaction does impact the REIT operationally, and it is pending approval by OUELH shareholders and the MAS. Our target price translates to a FY18e yield of 7.2% and a P/NAV of 1.12x.

Figure 1: Ownership structure of Bowsprit and FIRT, pre- and post-acquisition 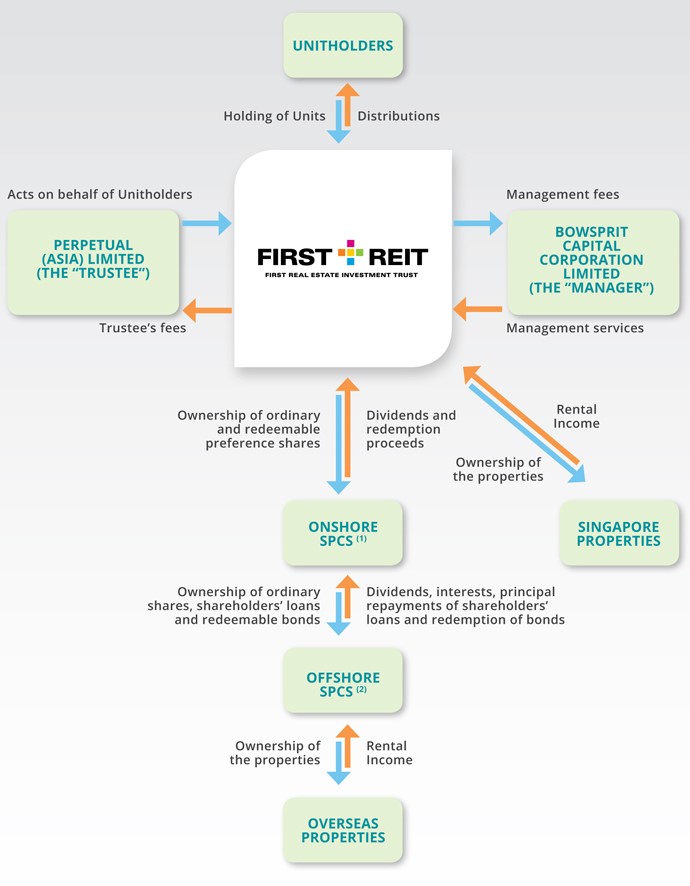