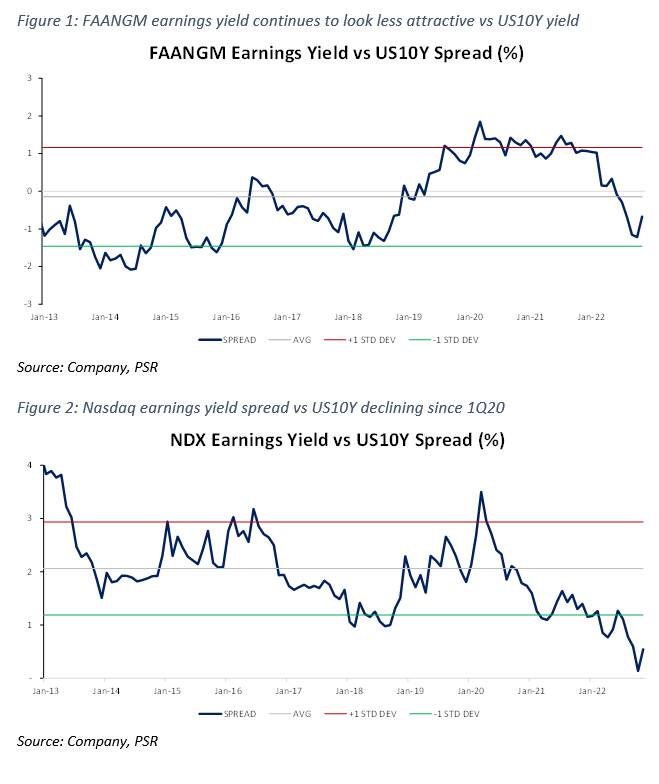 Comment: With the company focusing on cost-cutting measures like reducing headcount and developmental expenses, it should positively expand margins – which have seen sharp contractions of late due to slowing revenue growth and higher expenses.

Comment: The iPhone production disruption is concerning for Apple as it takes place in the holiday season, its busiest and best-performing quarter of its financial year. Furthermore, it is also affecting the iPhone 14 Pro models, which are in higher demand compared to the base iPhone 14 models. We view that although revenue for the December quarter is likely to be affected, Apple should be able to re-capture those sales when the supply has stabilized as it enjoys strong customer loyalty, and has buyers who are willing to wait despite the extended lead time instead of switching to another smartphone brand.

Comment: Amazon’s layoffs come as no surprise as the company has been struggling with its efficiency since the pandemic situation started to improve. 9M22 operating income was 56% lower than that of FY21. Coupled with a lackluster guidance for the current quarter and macroeconomic uncertainties, it was only a matter of time that Amazon follows the steps of its big tech peers in their efforts to improve margins.

Comment: NFLX’s stock has risen almost 37% in the last 3 months, mainly due to better-than-expected subscriber numbers, and the potential margin expansion from its much anticipated ad-supported subscription tier. We do expect long-term tailwinds from increasing adoption of streaming services to continue given the shifts in consumer preferences away from traditional TV.

Comment: GOOGL’s stock continues to be hampered by weakness in the global digital advertising industry, with revenue slowing and margins contracting. Much uncertainty still surrounds its revenue outlook for FY23e given pullbacks in discretionary spending by many marketers.