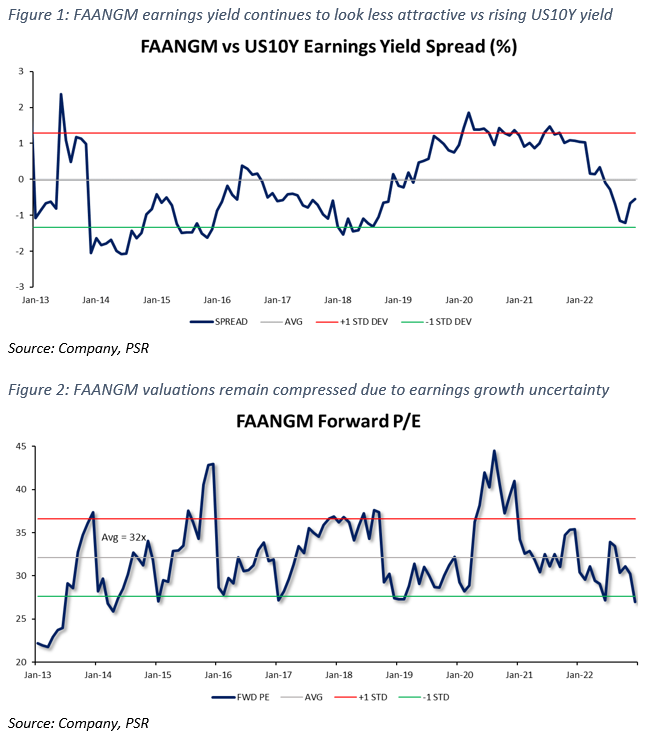 Comment: Meta’s stock was relatively flat in December, after a huge gain in November following news of employee cuts. With 4Q22 earnings results coming up shortly, we do think that there is some optimism around the stock with margins expected to rebound in FY23e due to spending cuts and a rebound in digital advertising. Meta’s operating margin for 3Q22 was 20%, down from 36% a year ago.

Comment: Apple’s stabilizing iPhone supply has calmed some of the worries on the company’s sales and we believe the focus is now shifting towards its ability to re-capture the sales lost during the December quarter. However, the surge in Covid-19 cases in China following the easing of its zero-Covid policy presents some degree of uncertainties as factories require healthy workers in order to maintain a stable production level. Apple will be announcing its 1Q23 results on 2nd February 2023.

Comment: We view Amazon’s revenue will continue to face pressure as consumers struggle with high inflation, while AWS’s clients are opting for lower-tiered products as companies cut down their spending. It will be interesting to see how Amazon performed in 4Q22, especially as it said that the latest holiday shopping weekend from Thanksgiving through Cyber Monday was its biggest ever, and we believe any deviation from expectations is going to cause significant market reactions.

Comment: Netflix continued to perform well in 4Q22, up 25% after positive news surrounding the launch of its new ad-supported subscription plan. Streaming continues to gain as the main source of entertainment in the US, extending its lead over cable TV, which should continue to be tailwinds for Netflix as it continues to grow its subscriber base and pricing power YoY.

Comment: Alphabet stock was down 13% in December amidst concerns over declining holiday spend, dragging the stock down about 9% in 4Q22. Its rights acquisition of NFL Sunday Ticket comes as other streaming competitors continue to focus on live sports as a way of attracting new subscribers to the platform. It also reinforces Alphabet’s emphasis on YouTube and connected TV as a way of generating additional digital advertising and recurring subscription revenues for the company. YouTube Ads made up about 11% of total revenue in 3Q22.

Comments: Microsoft is witnessing a slowdown in the PC business and cloud-computing platform Azure, but the long-term trajectory remains intact. The company enjoys tailwinds from digital transformation and cloud-migration trends, as the cloud-computing market will grow at 16% CAGR to reach US$1.6tn by 2030, according to Grand View Research. The demand for its Office 365 suite of productivity software will also continue to be robust amid the rising need to manage tasks and workflows.