In FY16, impairment losses on PP&E and provisions for account receivables were reported at US$70.9mn, US$20mn out of which was from provisions for receivables. Such an amount slashed bottom line to losses. Together with US$81.1 impairment in FY15, total amount in recent two years amounted to US$152mn. Associates and JVs used to have positive profit contribution also made impairments at the year end.

Top line dropped by 14% Y-o-Y in 4Q16, resulting from two units’ suspension of operation. One of them was retrieved for maintenance, and the other one was under reallocation. Generally, reallocation of a service rig took more than 2 months, according to management guidance. It’s expected that there will be 16 service rigs under work in 1Q16, one more than the number of units in 4Q16.

Oil price (Brent) recovered to above US$50/bbl and stayed at full-year high, however low day rate still remained stagnant as rig operators on the one hand suffered from liquidity crunch continuously, and on the other hand, they kept the wait-and-see view until oil price form a solid base at the current level. The management guided that none of the existing clients raised the operating budget in 4Q16 even though Ezion approached them for a renewal of charter rates. The downturn will move forward in 1Q17, and turnaround is expected thereafter.

As expected, Ezion reached the agreement with its bankers to reduce its annual principle repayment to match its operating cash flows. According to management, the upcoming repayment or financing will anchor on the Group’s working capital.  If market recovers, more cash inflows after deduction of working capital needs will be repaid to banks by part. On the contrary, if market weakens, deferment of repayment is allowed owing to further tightened working capital. Moreover, it announced to have CAPEX cut US$270mn with indefinite postponement of 4 units of service rigs, but the Group plans to spend US$100mn on Mobile Offshore Production Unit (MOPU) conversion in FY17. As of now, we believe Ezion can relieve a bit in terms of liquidity crunch.

We revise upward FCFF from US$90mn to US$97mn in FY17e and from US$98mn to SG$110mn due to the reduction of CAPEX. WACC is changed from 8.9% to 8.7% due to gearing adjustment resulting from loosen of due repayment. Because of rights issue in 3Q16, the year-end shares outstanding totaled 2.1bn in FY16. We downgrade the rating to “Accumulate” with lower DCF-derived target price of S$0.45 (previous S$0.48) given the last closing price was S$0.39 with lower upside of 15.4%. 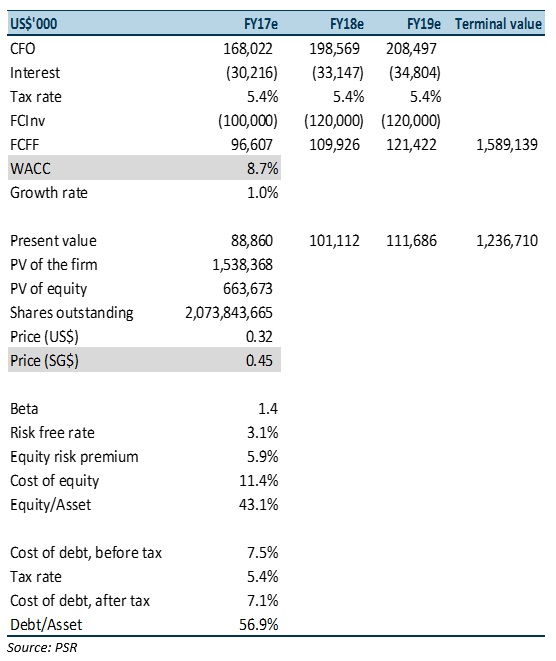