+ High income visibility due to portfolio occupancy of 99% (63% of NPI underpinned by master leases), and WALE by GRI of 4.6 years. Including the newly-acquired Fuzhou E-commerce asset (acquisition to be completed by August 2019), 63% of NPI will be secured by master leases to the Sponsor. Hengde Logistics, the specialised logistic asset customised and leased to a state-owned tobacco company, contributes c.15% to NPI. Due to the state-ownership, we view the tenant quality at Hengde as high and will not pose any risk to revenues. All assets are at 100% occupancy except Wuhan Meiluote (85.8%).

– Occupancy at Wuhan Meiluote fell 13.8pps QoQ due to non-renewals. This asset contributes only c.S$0.7mn (1.7%) towards NPI. It consists of a warehouse, auxiliary office building and a dormitory. Around 6,000 sqm of warehouse space was vacated in 2Q19. There are encouraging enquiries to fill up space in this asset.

ECW successfully refinanced all the onshore and offshore loans maturing in July 2019. This represents 100% of ECW’s existing borrowings. The quantum of loans has been increased from c.S$402mn to c.S$640mn (of which S$547mn has been drawn down). The higher loan quantum comprises acquisition financing for the Fuzhou E-commerce asset. While the interest rate was not disclosed, the cost of borrowing could be similar to the previous quarters (1Q19: 4.1%). The proportion of onshore and offshore loans has been altered, from 50:50 to 66:33 in favour of SGD loans. This will help to maintain the cost of borrowing given the increase in interest rates on RMB denominated loans vis-a-vis the lower interest on SGD denominated loans. ECW’s cost of borrowing in SGD/RMB was 4.1%/5.4% p.a. for the quarter ended June 2019.

Two leases with below market rents will expire in 2020 and 2021 – one lease at the Hengde facility and the second lease to one of the anchor tenants at Wuhan Meiluote, which is c.25% below market rent. Renewal at market rents represents a positive reversionary potential for the REIT.

A tail risk to our valuation remains the weakening of the RMB. The fresh bout of trade war tension these past few days saw the RMB crossing the psychological level of 7.0 against the USD. Despite the headlines, SGDRMB pair was only down 2.1% YoY. 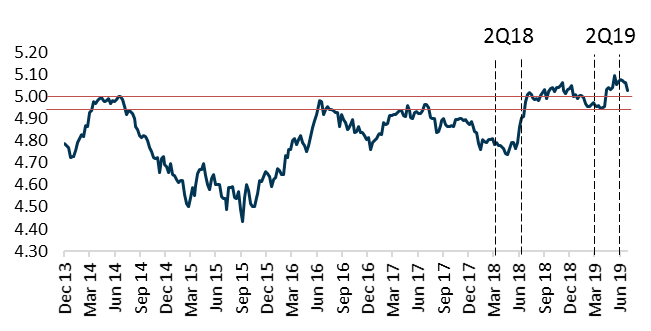 Figure 1 shows the prices that the SGDRMB pair has been trading at, with emphasis on the 2Q18 and 2Q19. The area between the red lines indicates the put spread hedge for the quarter ended June 2019. ECW hedges 75% of distributable income on a 6-month rolling hedge using put spreads. The hedging strategy employed means that the REIT will accept the FX fluctuations within a collar and remain protected when the SGDRMB pair moves strongly against (as well as in favour of) them. The cost of implementing the put spread strategy is 50% the cost of the forward hedge strategy. Conversely, it takes away the upside potential when the currency moves in favour of them. The management is re-evaluating their FX hedging strategy in light of the increased FX volatility.