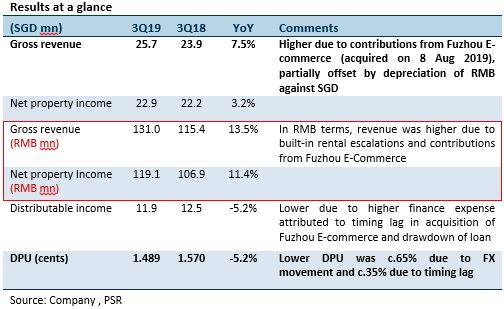 + High income visibility due to portfolio occupancy of 99% (69%/72% of FY19e/FY20e revenue underpinned by master leases) and WALE by GRI of 4.6 years. 69% of revenue is secured by master leases to the Sponsor, Hengde Logistics, the specialised logistic asset customised and leased to a state-owned tobacco company, contributes c.15% to NPI. All assets are at 100% occupancy, except Wuhan Meiluote (85.1%), bringing portfolio occupancy to 99%.

– Occupancy at Wuhan Meiluote slipped 0.7ppts QoQ. This comes after a -13.8pps fall in occupancy in 2Q19 due to non-renewals. This asset contributes c.S$0.7mn (1.7%) towards NPI and consists of a warehouse, auxiliary office building and a dormitory. c.6,000 sqm of warehouse space was vacated in 2Q19. Throughout the quarter, the asset was rented out on a short-term lease.

Two leases with below-market rents will be up in 2020 and 2021 – one lease at the Hengde facility and the second lease to one of the anchor tenants at Wuhan Meiluote which is c.25% below market rent. Under market rents represent positive reversionary potential for the REIT.

A key risk to our valuation remains the weakening of the RMB. Figure 1 shows the prices that the SGDRMB pair has been trading at, with emphasis on the 3Q18 and 2Q19. The area between the red lines indicates the put spread hedge for the quarter ended September 2019. 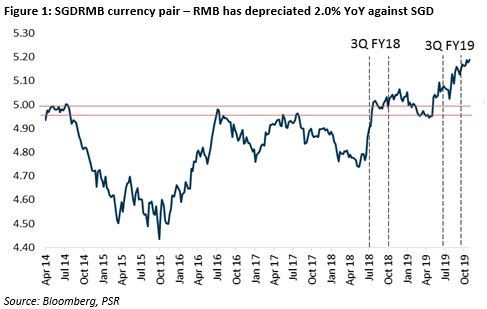 ECW hedges 75% of distributable income on a 6-month rolling hedge using put spreads. The hedging strategy employed means that the REIT will accept the FX fluctuations within a collar, and remain protected when the SGDRMB pair moves strongly against (as well as in favour of) them. The cost of implementing the put spread strategy is 50% the cost of the forward hedge strategy, however, it also takes away the upside potential when the currency moves in favour of them. The management is re-evaluating their FX hedging strategy.