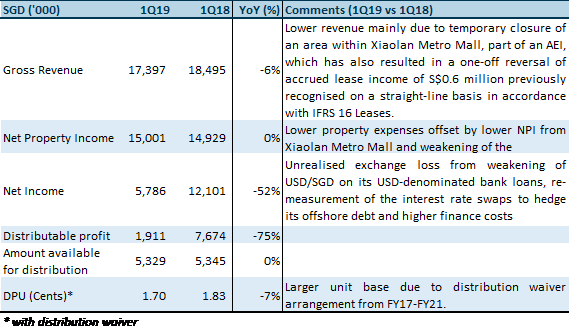 + NPI margins improved across the board. While revenue declined on the whole, NPI was held up by lower property expenses across all assets, which relate to the lower maintenance, cleaning, advertising and promotion costs. Shiqi Metro Mall, Dasin’s largest contributor by GRI, saw its NPI margin improve to 87% in 1Q19 from 78% in 1Q18.

While occupancy will be depressed in the near term, favourable renewal and rental escalation rates are progressively expected at Xiaolan Metro Mall once the ongoing AEI is completed. We remain positive on the inorganic growth prospects for Dasin, with its ROFR pipeline of 20 properties spanning four cities – 14 of which have been completed. Doumen Metro Mall and Shunde Metro Mall, both completed in 2018, are possible acquisitions as they would provide Dasin the runway for growth.