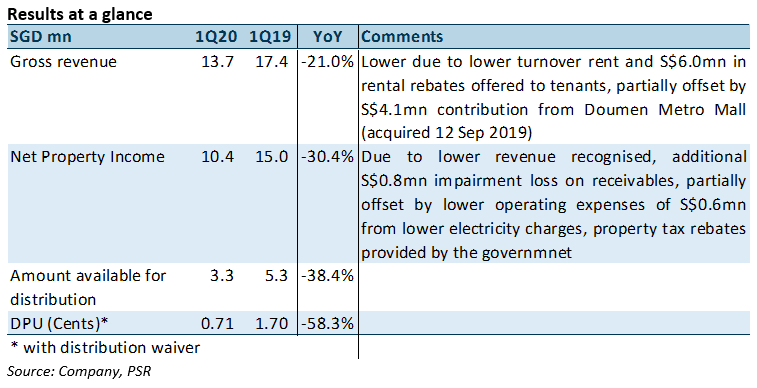 + Creating opportunity through crisis. 42 live broadcasts were hosted by influencers and tenants via the live streaming on the “Dasin Hui” app, which has a membership base of 420,000. These broadcasts were conducted from 2 March to 28 April 2020 to drive tenant sales.

– Portfolio occupancy fell by 2.0ppts QoQ to 96.8% due to lower occupancy across all malls. Dasin managed to renew 74% of the leases expiring in 1Q20. However, occupancy was lower due to non-renewals, as well as space that was vacant due to ongoing AEIs.

AEI works for 9,085sqm (13.2%) of space at Ocean Metro Mall commence in 4Q19. The completion of the AEI has been delayed from 1Q20 to 2Q20 due to the COVID-19 outbreak. Approximately 70% of construction work was completed as at 31 March 2020. The AEI was undertaken in a bid to enhance the mall’s competitiveness. Trustee-Manager undertook a market research study and negotiated the early termination of lease with a “furniture and finishing” tenant. The space returned will be carved up and leased out to tenants providing goods and services targeted at children. The space has been full committed, securing rental reversion of 47% over previous rents. 2,500sqm of space will be leased out to children’s playground operator, with the remaining space leased to children education and enrichment tenants. 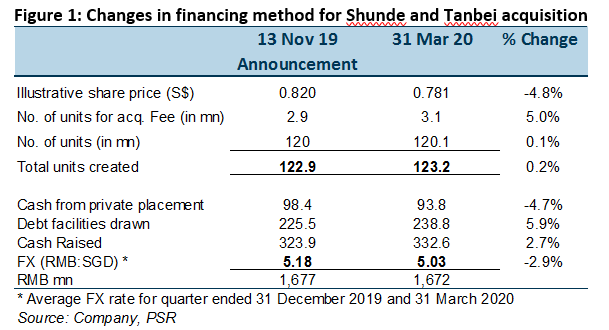 We remain positive on the inorganic growth prospects for Dasin. There remains a ROFR pipeline of 18 properties spanning four cities – six of which are still under construction, which will help to mitigate the DPU gap as the distribution waiver progressively falls off. The number of units under distribution waivers was 38.2% in 2019 and will fall to 24.3% and 19.3% in FY20e and FY21e, increasing the number of units that are entitled distributions over the years.

Key risks to our valuation include: slowdown in discretionary consumption, second wave of virus and lingering fear and deferment of discretionary spending.

We expect Dasin to acquire 2 to 3 more assets in order to maintain a c.8% DPU yield by the time the distribution waiver falls off completely in FY22. As such we raise our terminal growth rate from 0.5% to 1.5% to better reflect the pace of acquisitions. The adjustments to our forecasts resulted in a higher TP of $0.91.

Phillip Securities Research has received monetary compensation for the production of the report from the entity mentioned in the report.