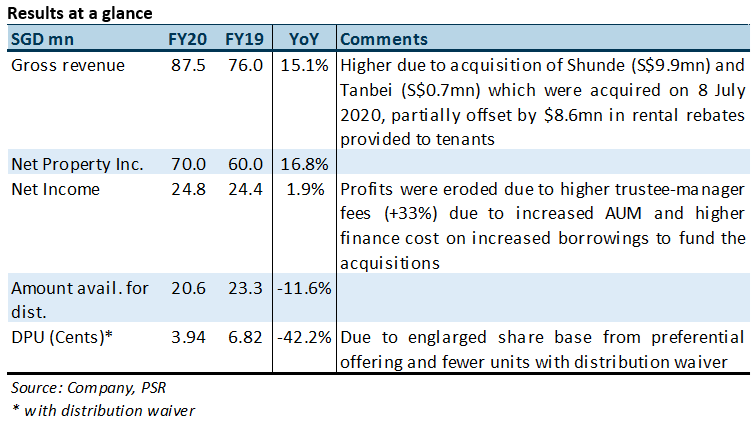 + Portfolio occupancy increased from 96.1% to 96.5% QoQ. This was still 3.3ppts below 4Q19 occupancy of 98.8%. Renewals formed the bulk of the leases signed. Rental reversions were 46% on 13% or 9,085 sqm of space at Ocean Metro Mall. The mall had been enhanced from January to December 2020. The space returned was previously occupied by a furnishing tenant and was carved up and leased to tenants purveying goods and services for children. Portfolio rental reversions were not disclosed. We believe they could have been negative, mirroring China’s single-digit retail contraction. Conducive terms were extended to some new leases signed during the year, such as waivers of rental step-up in the first year.

– Portfolio valuation dipped 4% YoY. The most notable decline was Dasin E-Colour’s 8.1% fall, likely as occupancy slipped from 96.3% to 86.0% YoY. Dasin E-Colour was affected by the closure of nearby universities – the mall’s primary catchment – during lockdowns. The mall is the smallest in Dasin’s portfolio, accounting for 2.8% of its FY20 revenue. Valuations of two newly-acquired malls, Shunde and Tanbei Metro Malls, also dropped 1.2% and 0.9% respectively. Valuations for the rest of Dasin’s malls were down 4.2-5.1%.