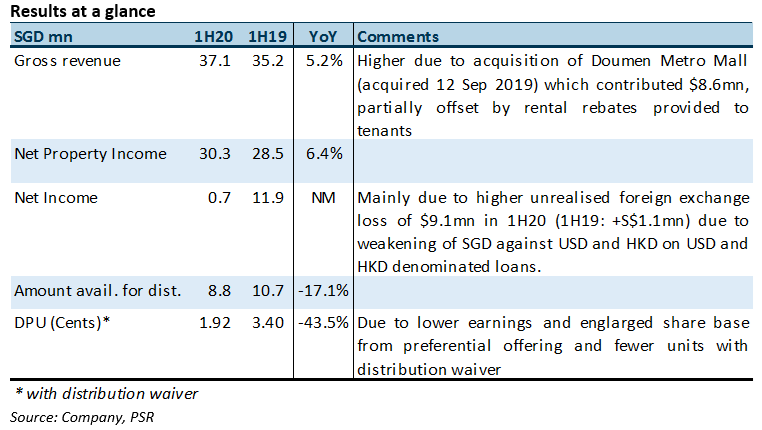 + June 2020 turnover rent recovered to 90.4% of 4Q19 average, lifted by the easing of lockdown measures (Figure 1). 4% of leases are on pure turnover basis, a proxy for tenant sale, which have exhibited a similar recovery.

+ NPI margin improved to 81.6% in 1H20, from 80.7% in 1H19, mainly due to lower operating expenses from lower electricity charges and property tax, as well as property tax rebates provided by the government. Dasin has provided c.S$8mn in out-of-pocket rental rebated for tenants, which translated to c.1month in rental waivers. The management does not foresee offering any additional rebates, given the recovery in tenant trading, which is has recovered to near pre-COVID levels.

– Portfolio valuation fell by 4.6% in RMB terms, due to lower expected rental growth rate, higher discount rate and terminal cap rate assumptions assumed by valuers. In SGD terms, valuations fell by a lower 2.5% due to the strengthening of RMB against SGD.

– 13.8% of leases by GRI expiring in FY20 to be renewed, majority coming from Xiaolan (17.8%), Ocean (17.7%) Shiqi (15.6%) (Figure 3). Historically, these three assets are strong performers have maintained high occupancies of 98% to 99%. As such, we are optimistic on the leasing demand for these malls. A noteworthy 13.8% of leases by GRI (3.5% by NLA) has yet to be renewed (Figure 2), likely due to the uncertainty and softer leasing sentiment in 1H20. The steady recovery in tenant sales is encouraging and may return confidence to tenants who were delaying renewal decisions.

AEIs and refreshing of the malls tenant mix have borne fruit

The acquisition of Shunde and Tanbei Metro Mall was completed on 8 July 2020 and will contribute c.12% to revenue. Dasin will relook at acquisitions plans in FY21.

Positioned to benefit of transformation of the Great Bay Area

China’s plans to transform the Greater Bay Area (GBA) into a booming financial hub was announced in the 13th 5-year plan in December 2016. The up-and-coming exchanges are located in Guangzhou (for carbon emission futures trading) and Macau (NASDAQ-like market that helps start-ups). With this transformation, the population for Greater Bay Area is forecast to grow by 43% over the next 15 years to around 100 million. All 7 of Dasin’s malls are located within the GBA – 5 in Zhongshan, 1 in Foshan and 1 in Zhuhai, and are within a 1-hour traffic circle of GBA cities (Figure 4). As Tier 2 cities, they provide affordable housing alternatives for the surrounding Tier 1.5 cities like Guangzhou and Shenzhen. Zhongshan is primed to benefit from its location in the midpoint of the GBA, as well as the Shenzhen-Zhongshan bridge which is under construction (est. completion 2021), and will slash traveling time between these two cities from 1hour and 15minutes to 30minutes. 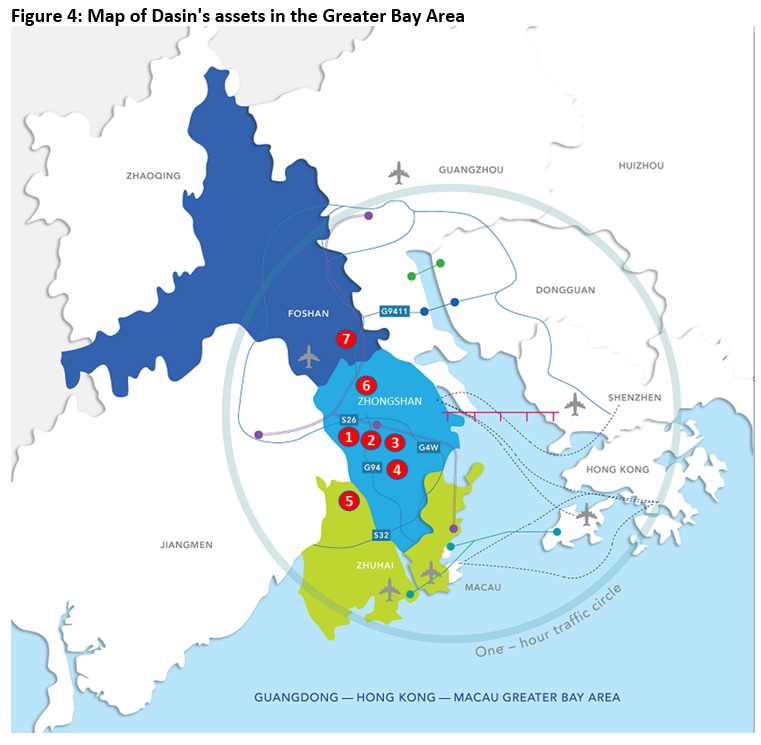 We remain positive on the inorganic growth prospects for Dasin. There remains a ROFR pipeline of 18 properties spanning four cities – six of which are still under construction, which will help to mitigate the DPU gap as the distribution waiver progressively falls off. The number of units under distribution waivers was 38.2% in 2019 and will fall to 24.3% and 19.3% in FY20 and FY21, increasing the number of units that are entitled distributions over the years.

Key risks to our valuation: slowdown in discretionary consumption, second wave of virus and lingering fear and deferment of discretionary spending.