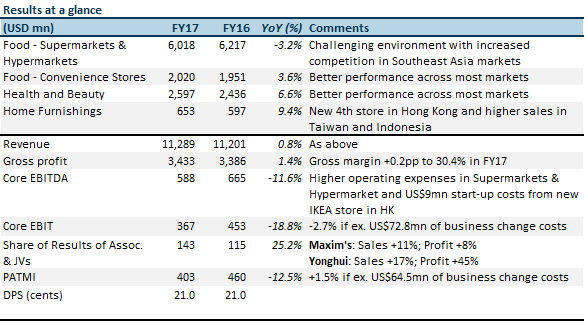 + Positive performances in most of the segments. Notably, operating profit from Convenience Stores and Health and Beauty divisions grew 15.5% and 19.6% YoY, respectively. Both divisions saw margin improvement of 0.4 and 0.9 percentage points, respectively, reflecting its successful store rationalization and beauty care range enhancements initiatives.

+ Strong results from its key associates. Its Associates and JVs contributed 28.2% of FY17 EBIT, compared to last year’s 20.5%. Maxim’s saw strong performances from its branded products, particularly mooncakes, and its restaurant businesses in China; while Yonghui Superstores were underpinned by net addition of 292 stores in 2017 and margin gains.

– Persistent weakness in the Supermarket and Hypermarket businesses, mainly in SE Asia (Southeast Asia). Notwithstanding the soft consumer sentiment in Singapore, Malaysia and Indonesia, competition in these markets intensified in terms of pricing and store format (e-commerce in Singapore and smaller format stores in Indonesia).

Positive outlook on brighter economic prospect. We expect recovery in SE Asia consumer sentiment as well as higher Chinese tourist arrivals to Hong Kong and Macau to gain momentum in 2018.

A new Group Chief Executive, Ian McLeod, joined the Group in 18 Sep-17. The former Coles Group’s Chief Executive, who brings with him, over 30 years of international retailing experience, and an impressive track record of resuscitating the ailing retail giant in Australia. He has initiated a strategic review since he took helm.