– Bus operations are not immune. The lower frequency in bus mileage will impact revenues. The service fee paid by the authorities is dependent on mileage travelled. 1Q20 there was less impact on Singapore. Reduction in advertisement revenue was another negative driver for earning.

– Overseas operations perform poorly. Poor weather and a declined in tourism pushed the UK and Ireland operations into losses. China similarly swung into losses due to lock-downs and rental relief to taxi drivers.

Taxi – Comfort taxi drivers will receive rental relief in stages from 13 February onwards (Figure 1). Taxi drivers will also receive 100% rental waiver from 7 April to 1 June, to coincide with the circuit breaker period. We estimate the rental rebates from Comfort in 2Q20 will be around S$68.9mn (Figure 2). Taxi operations are expected to be loss-making in FY20e.

Public transport – Public bus and rail ridership was down between 70-75% during the circuit breaker period. Lower mileage operated will lead to less service fee to be received from the authorities. However, capacity needs to be close to pre-Covid level because safe distancing measures cannot totally be enforced on public transport. Rail operations will bear the full brunt from the collapse in ridership.

The recovery will be slow. Bus operations can recover faster as revenue depends on capacity, not passenger volumes. However, rail and taxi will suffer for a more prolonged period. The unknown for us will be the number of taxi drivers churning out of or into Comfort. With rental rebates still underway, the taxi fleet for Comfort has been relatively stable. 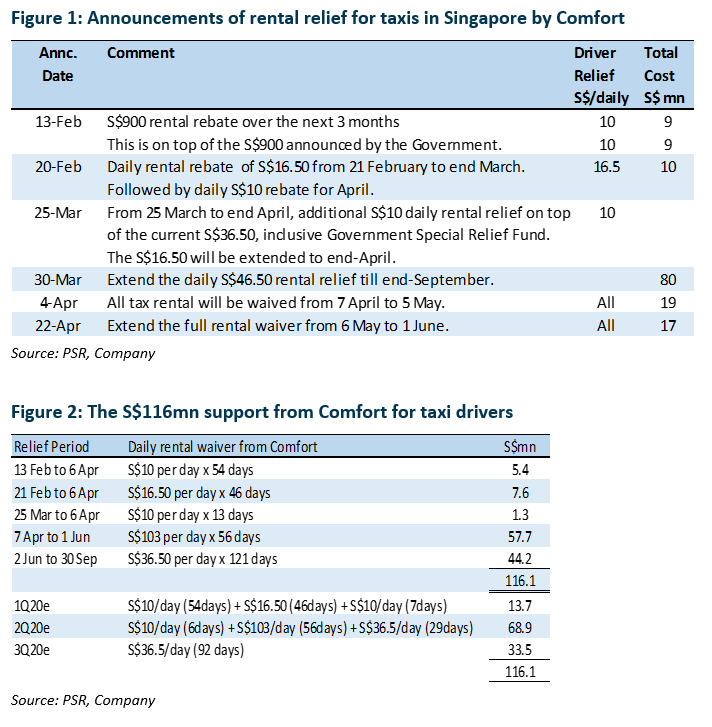