In our previous report, we stated that FY17 will be an even better year for the Singapore Bus business. The reason is there will be a full year contribution under the new government Bus Contracting Model (BCM), compared to only four months contribution in 2016. The positive impact of the BCM was evident in ComfortDelGro’s (CDG’s) 75%-owned subsidiary SBS Transit’s (SBST’s) 1Q FY16 results, which reported 973% higher operating profit for the Public Transport Service segment (which is a mix of Bus and Rail operations). The other positive is that SBST won the competitive tender to operate the Seletar bus package; a contract worth ~$480 million for a five-year period which begins in 1Q 2018.

Overall Taxi fleet in Singapore contracted 2.6% during 2016, due to competition from private-hire car services. Likewise, CDG’s taxi fleet has contracted from ~16,800 at end 4Q FY16 to ~16,000 at end 1Q FY17. Taxi-bookings have also come off 14% y-o-y lower and a “slight drop” q-o-q. The Automotive Engineering Services segment also reported lower revenue due to lower volume of diesel sold. Taxi fleet idle rate worsened to 3.0-3.5%, when it was 1.4% for FY16. Idle rate in 4Q FY16 was possibly ~2.5%, by our estimates. The Group’s gross capital expenditure in taxis was also 42% y-o-y lower, due to slowdown in fleet renewal and is expected to remain at this pace for the rest of the year. To mitigate, CDG has implemented new schemes such as the flat-fare option for taxi bookings and flexible rental scheme (25CJ initiative).

Rail: Dragged down by DTL, but positives over the horizon

Downtown Line (DTL) remains loss-making, dragging down profits from North East Line (NEL), resulting in overall Rail loss. DTL Stage 3 (DTL3) is expected to open by end-2017 and runs through the most populated section of the line. The Land Transport Authority (LTA) forecasts average daily ridership of 500,000 – double of the current 245,000 – when the full DTL is opened. On future new lines, both Rail operators (SBS Transit and SMRT Corp) have submitted their bids for the upcoming Thomson-East Coast Line (TEL); outcome should be made known by the end of this year. 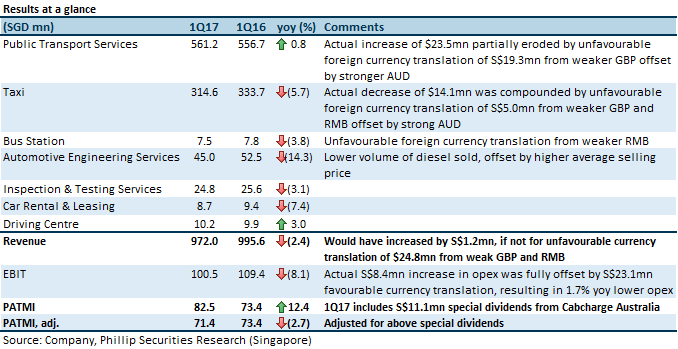