+ Buoyant performance in Singapore Property segment amid improvement in the sector: Sales value for Singapore Property segment close to tripled in 1H17 to S$1.1bn driven by higher sales volume (1H17: 691 units vs 1H16: 324 units) of completed projects, in particular, Gramercy Park and The Venue Residences. Excluding the contribution from Lush Acres EC which was recognized entirely in 2Q16, revenue and PATMI in 2Q17 would have grown 15.7% and 43.4% YoY to S$1,263mn and S$192.2mn respectively.

+ Growth across the board for Hotel Operations: Revenue and PBT for Hotel Operations via the Group’s 65%-owned subsidiary, Millennium & Copthorne Hotels PLC (M&C), grew 4.3% and 1.6% YoY to GBP46mn and GBP42mn respectively. While the bulk of PATMI gains was mainly attributed to one off items amounting to GBP12mn, hotel performance also came in stronger driven by higher RevPAR growth across three of M&C’s key markets (US, London and Australia).

– Ongoing sluggishness in China: Out of three launched projects in China, the Group has moved two out of 126 units in Eling Residences (8% sold) for a sales value of RMB12.8mn in 2Q17. The Group also sold another 65 out of 1,804 units in Hong Leong City Center (73% sold) during the quarter. This was primarily due to effect of a slew of restrictive property cooling measures implemented across China.

Strong recovery in the high-end segment sets the stage for New Futura launch: The Group’s 174-unit condo project, Gramercy Park, located in the CCR market segment registered keen interest. ASP gained 2.9% QoQ to S$2,880 following the sale of 25 units after the soft launch of Phase two of the development. Among the sales, a 5-bedroom penthouse unit was sold for S$17 million, translating to a transacted ASP of S$3,072 PSF. We view that the strong demand for the recently launched Martin Modern and Gramercy Park as an advance indication to the demand of a nearby upcoming new 124-unit freehold condominium project, New Futura. Additionally, with the selling out of most nearby developments, Cairnhill Nine and OUE Twin Peaks, we expect the thinning supply of high-end projects to benefit both ASPs and take up rates when launched.

Near term plan is to replenish land bank for development but still has three unlaunched projects for sale: Including New Futura, CDL has two other development projects that are yet to be launched, the land site at Tampines and South Beach Residences. While we view that the Group is committed to replenishing its landbank for future development, the Group has lesser urgency since they still have three unlaunched development projects and 428 unsold units (attributable to CDL) in its inventory. Out of the seven developers, we have coverage on, CDL has the most number of unlaunched projects and existing inventory of unsold units in Singapore.

S$60mn AEI at Republic Plaza expected to generate a 10% ROI: CDL intends to commence AEI works at Republic Plaza in 1Q18 for 12 to 15 months, which is expected to generate an ROI of 10%. The AEI works will involve the creation of 5,000 sqft new retail GFA (21,000 sqft existing) via the conversion of some existing car park lots, and rejuvenation works in the development. CDL will also relocate into Republic Plaza by taking up 42,000 sqft. CDL will free up 60,000 sqft spanning across nine floors at City House, where ~50% of the space has already been pre-committed.

Outlook for China Property development segment still bright in the longer term: While we opine that China property development in China is likely to remain weak in the short term. This will be cushioned by the Group’s relatively limited exposure to the country (value of unsold units amounted to ~4% of our RNAV estimates). We are of the view that some of the Group’s development is likely to benefit in the longer term. For instance, the Group’s 48%-sold Hongqiao Royal Lake villa project in Shanghai will enjoy some scarcity value as Villa development is no longer permitted in China in a move to intensify land use.

Maintained a rating of “Accumulate” with higher TP of S$12.10 based on our revised FY17 RNAV estimates

We continue to favour CDL for its large Singapore development exposure of unlaunched and available for sale inventory. While there are near term challenges in the China development segment, the longer-term outlook remains bright. We have revised our RNAV per share estimates upwards by 9.3% to S$12.10 particularly, to take into account of higher ASPs in both existing and new development projects. We continue to adopt a 15% discount to RNAV estimates. 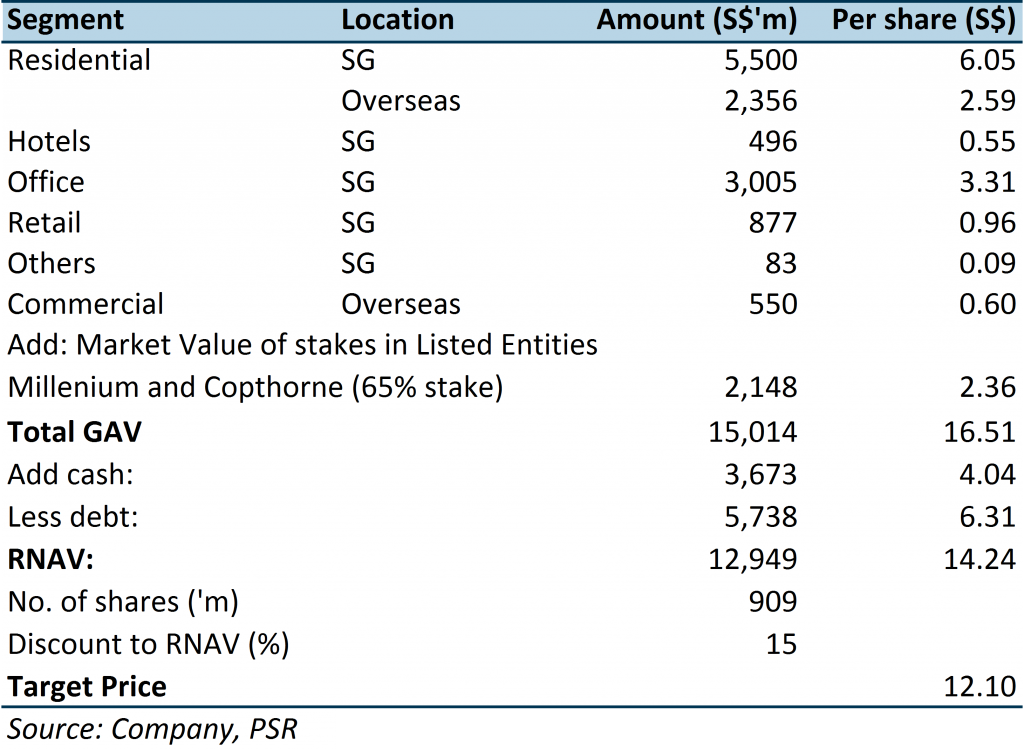 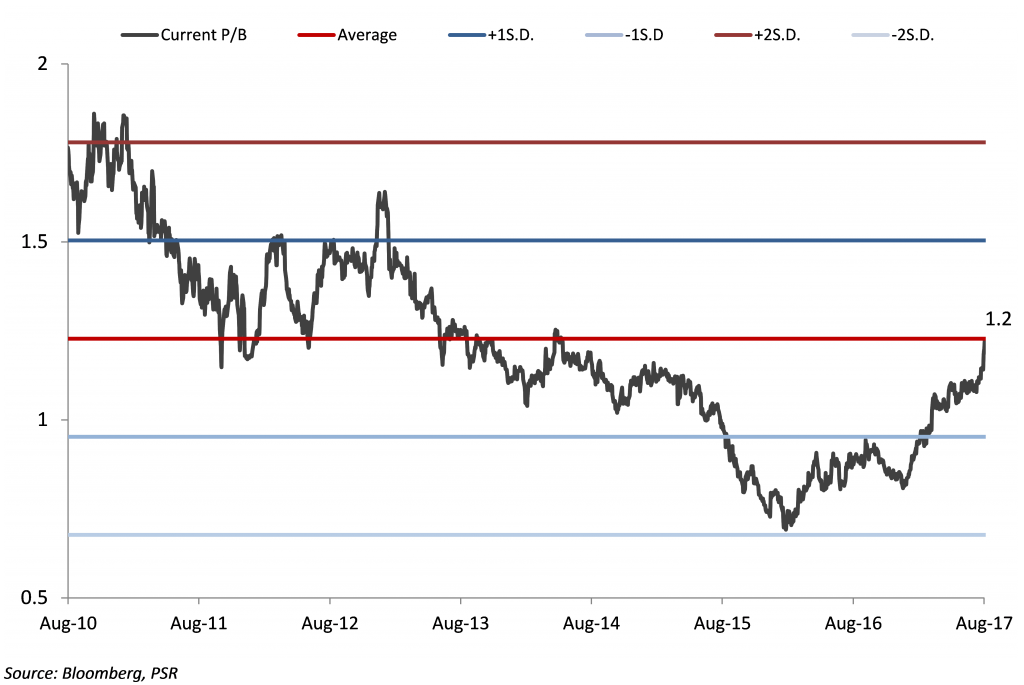