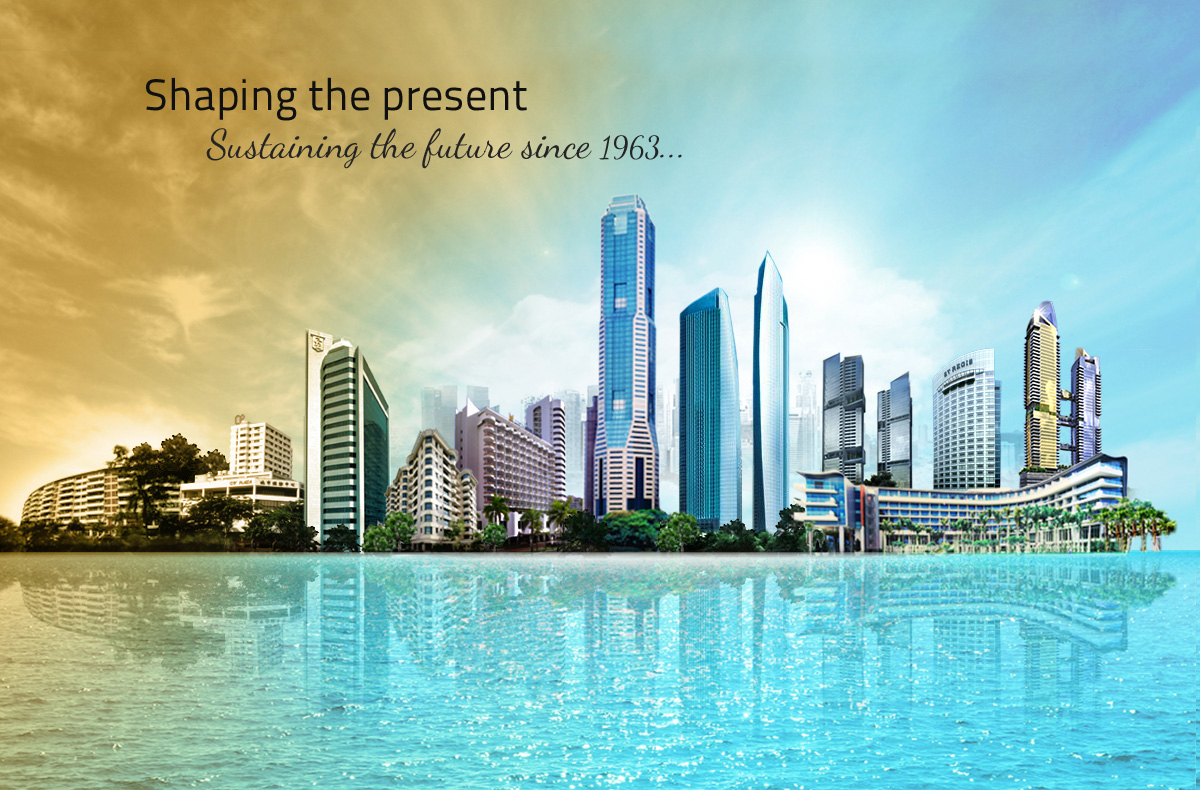 New supply of CCR units will likely remain scarce moving forward underpinned by low land sales activity in CCR. We opine that the shrinking supply of CCR properties will eventually lift the segment’s price. Unsold units in CCR made up 40.7% of total unsold units under CDL’s portfolio of development properties, and CDL is well-positioned to benefit in the scenario of a market turnaround given its large exposure to CCR properties.

CDL has seven development projects which have more than 10% unsold units within the project. Apart from two projects, and assuming a gradual absorption of these unsold units based on transaction history, CDL remains in good stead to clear the inventory of unsold units. Given the Group’s strong balance sheet (net gearing of 20% after including fair value gains on investment properties), it is not pressed for time to clear these units.

Rental Properties segment contributed 21.3% of total profit before taxes (PBT). The segment has provided a certain degree of earnings visibility, and helped to insulate its performance during market slowdowns. Within the Group’s investment properties, office properties formed bulk of the portfolio’s value (72.6%). The Group’s portfolio of offices continues to enjoy healthy occupancy of 97.4% versus the national average of 90.9 % as at 2Q16 despite the softness in demand for office space.

M&C carries most of its hotels at cost, less depreciation and impairment charges on its books. Despite this, M&C currently trades at a deep discount of close to 0.56 times book value, below the 10 year historical mean of 0.7 times.

We believe that CDL will continue its momentum in asset monetisation via M&C, as we note previous monetization strategies by the Group which included the restructuring of Singapore assets by M&C via the initial public offering of CDL Hospitality Trust (CDLHT), as well as the listing of China-focused developer First Sponsor, which reduced CDL’s deemed stake in the company from 46.3% to 35.6% post listing.

Initiating coverage with “ACCUMULATE” rating and target price of S$9.98

We favour CDL for its exposure to CCR inventory and strong balance sheet, and we believe that the market has overly discounted the developer. This is on top of the fact that CDL holds its investment properties based on historical cost. With the successful launch of 3rd tranche of PPS, CDL does not face any impending Qualifying Certificate (QC) charges or claw back of Additional Buyer’s Stamp Duty (ABSD) remission until September 2017.

City Development Limited (CDL) was founded in 1963. It started with a development and sales model before branching out into property investments and management. It completed its first residential property in 1965. In 1972, Hong Leong Group(HLG), under the guidance and leadership of founder, Kwek Hong Png, acquired a controlling interest in CDL and embarked on a strategic diversification into investment properties. HLG provided the company with much greater financial resources, and allowed CDL to expand its footprint through numerous acquisitions and development projects. These properties span across numerous subsectors with a focus on residential, office and hospitality. As at 2Q16, the development properties totaled S$5.4bn while its investment properties are valued at S$2.6 billion.

While the absorption rate of CCR properties has been modest for the past few years, we note that the number of unsold units based on the ratio of CCR-to-RCR and CCR-to-OCR units have been declining for the past 10 years, which suggests that the supply of new CCR units is thinning. New supply of CCR units will likely remain scarce moving forward underpinned by low land sales activity in CCR. That is, apart from a CCR land sale at Martin Road in July 2016 which would house an additional 450 units, the prior CCR land sale happened in November 2013, which means that there was close to a 3-year time gap when there were no land sales activities in CCR. We opine that the shrinking supply of CCR properties will eventually lift the segment’s price. Unsold units in CCR made up 40.7% of total unsold units under CDL’s portfolio of development properties. The Group is well-positioned to benefit in the scenario of a market turnaround given its large exposure to CCR properties (Refer to Figure 2).

Figure 1. Ratio of CCR properties to RCR and OCR and remaining unsold units in CCR 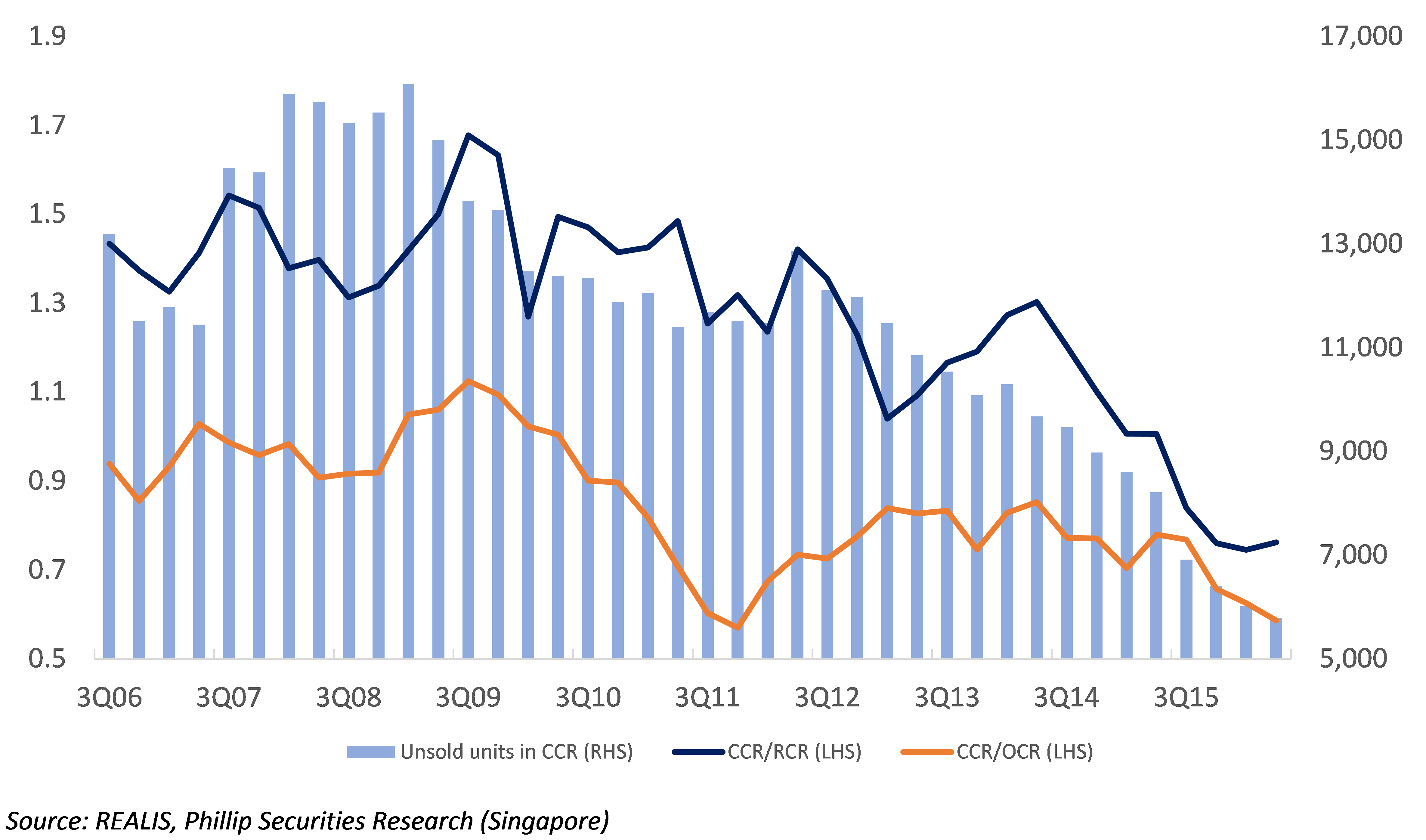 Figure 2. CDL’s portfolio of unsold units as at 2Q16 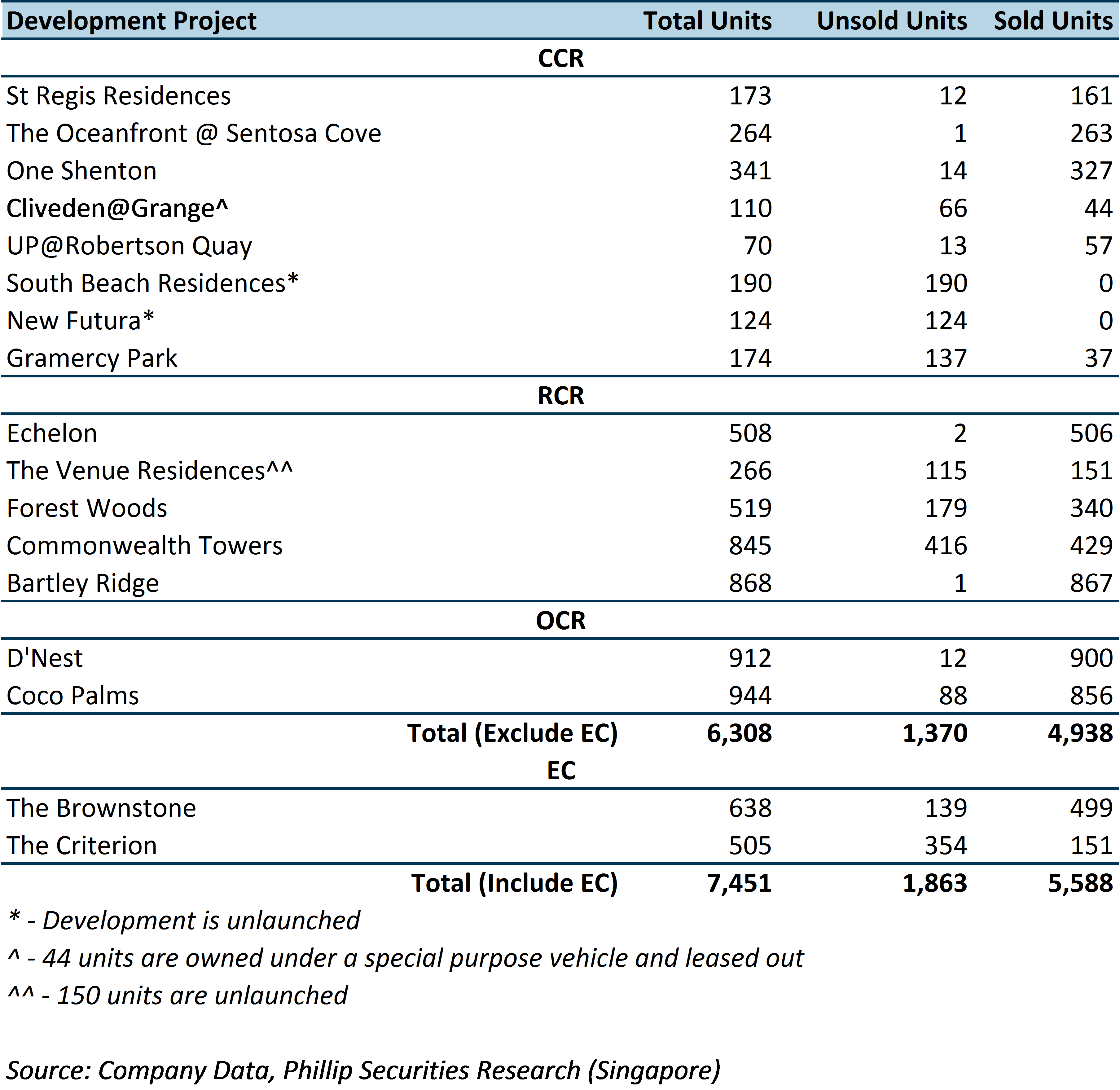 Near term price pressure expected on CDL’s portfolio of CCR properties, D9 and D10 in focus

As developers race to clear existing inventory of unsold units in order to avoid the impending QC and claw back of ABSD, they have resorted to cutting average selling price (ASP) of developments. This was in particular to the prices of new developments in District 9, 10 and 11 where ASP fell an average of 20% since the last five years. We believe the higher quantum of these units as well as the ABSD cooling measure would have most likely led to weaker demand. The weakness the demand for CCR units was accentuated when Heeton Holdings resorted to selling iLiv@Grange, a 30-unit luxury condominium project in a bulk sale for a price which translated to S$1,623 per square feet (PSF). Heeton was unable to sell any of the units since its temporary occupancy status (TOP) was granted to the development in October 2013, which subsequently resulted in the Group incurring a QC extension charge amounting to S$5.8 million. We estimate the sale would lead the Group to recognise a loss of c.S$18 million or S$307 PSF. We view that the iLiv@Grange transaction along with the ongoing weak demand for CCR units are among factors that are likely to put near term price pressure on CDL’s projects in the vicinity such as Gramercy Park (22% sold), Cliveden@Grange (37% sold after accounting for units that were leased) and New Futura (yet to be launched).

CDL launched a unique Profit Participation Security (PPS) investment platform in December 2014, which allowed it to monetize its properties through injecting these assets into a partnership for a five-year period with an option to extend for another two. Such a move also allows CDL to avoid any upcoming Qualifying Certificate (QC) extension charges by structuring the PPS entity under Singapore citizens or Singapore-incorporated private companies fully owned by Singaporeans. Besides allowing CDL to recycle capital for possible land bank replenishment, the structure also allows CDL to tide through the current weakness in Singapore’s property market and sell the properties at a more opportune time when prices recover within the five-year duration of the investment vehicle.

CDL has successfully launched the third tranche of PPS on 21 October 2016 which involved injecting Nouvel 18, a 174-unit luxury condominium development through a sale of the development for S$977.6 million (valuation: S$965.4 million) into the fund management. The proposed transaction will fetch a price of S$2,750 PSF, recognising a c.22% profit before tax margin for CDL which we believe is a fair price considering the current market conditions while matched with the transacted prices of nearby developments such as Ardmore Three (S$2,600 PSF) after factoring in discounts offered at the development). Secondly, the transaction also allowed the Group to avoid an impending QC extension charge of S$37.2 million. Including the latest PPS, CDL has launched three PPS’ between December 2014 and October 2016, the Group currently has c.S$3.5 billion of assets under management, and has met 70% of its S$5 billion target by 2018.

CDL’s balance sheet as at 2Q16 stayed strong with S$3.3 million in cash with a net gearing of 26% which is significantly below its historical average of 40%. Although some of its peers enjoy greater access to funding, CDL prefers to lower its interest rate risk in a more traditional manner. Since 2009, management has actively lower its reliance on debt funding for its development/investment projects, thereby lowering net debt. On an adjusted basis (including the fair value gain of its investment properties), CDL’s net gearing of 20% is lower than the industry average of 26%. The large availability of cash pile and low gearing provides CDL a war chest to pick up value accretive investments when the opportunities surfaces. In line with the management guidance, they are highly selective and critical of opportunities that arise during weak market conditions.

To read further, please download the PDF file below.