CDL moved 26 units out of 112 unsold units in The Venue Residences during 4Q16 at an average selling price (ASP) of S$1,408. Coupled with an additional 23 units which were sold during the first two months in 2017, the development has 23% of units that remained unsold. We noted that the 23 units sold between January 2017 and February 2017 were transacted at an ASP of S$1343 which was 4.6% lower than those that were sold in 4Q16. We expected CDL to slash prices gradually in the development in order to accelerate sales momentum and avoid the potential claw back of additional buyer’s stamp duty (ABSD) which is estimated at c.S$30 million including interest. We are of the view that the developer is in good stead to clear the remaining 62 units before the deadline of the ABSD clawback and maintain our expectations that ASP is likely to continue dipping towards our estimate of S$1,300 PSF point.

CDL sold 32 units out of 416 unsold units in Commonwealth Towers in the same quarter at an ASP of S$1,660. The developer has moved another 19 units between January and February 2017 at about the same price point. The development has 365 unsold units (43%) as at 23 February 2017. Similar to Venue Residences, we are expecting further price cuts at the development to accelerate sales of the remaining unsold units. We opine that the developer is likely to continue reducing prices, and projects ASP should come in at S$1,550 PSF. The deadlines for the clawback of ABSD for Venue Residences and Commonwealth Towers are September 2017 and February 2018 respectively.

We remain optimistic on CDL’s local and overseas property development segment despite the current challenging markets as unsold units in existing developments continue to be steadily absorbed amid the Group’s solid execution. With a growing cash hoard amounting to S$3.7 billion (Up 13.8% QoQ), we maintain our ‘Accumulate’ rating with an upgraded TP of S$10.40 based on our FY17 RNAV estimates.

CDL launched and sold 56 out of 87 units at the first phase of launch at Gramercy Park at an ASP of S$2,621 PSF which was better than our expectations. The remaining 87 units in a separate tower of the development is slated for launch by 1H17. We view that CDL still has time on hand to dispose these remaining units before QC extension fees are due in May 2018. Compared to developments which potentially face ABSD clawback, QC extension fees are less severe since fees are computed based on proportion of units that remain unsold. Although unlikely, even if no additional units are sold from here on till the QC deadline, the first year of QC extension fees works out to be c.S$20 million (S$50 PSF). Considering the Group’s strong financial position (S$3.6 billion in cash), CDL has plenty of resources on its balance sheet to utilise which gives the developer the option to hold on to these units without selling them at fire sale prices.

We note that government efforts in China to curb property speculation and stabilise the market has slowed the y-o-y growth in total sales volume in the major Chinese cities CDL are in, Shanghai, Suzhou and Chongqing. Nonetheless, we expect the Group’s China projects to be able to maintain their positive sales momentum due to their favourable locations and we will continue to monitor the pace of sales.

Much as a result of its diversification strategy out of Singapore, 80% of CDL’s land bank is now overseas, with China and UK as its largest markets. We expect sequential strong sales in CDL’s overseas residential developments to contribute more significantly to CDL’s profits in 2017 and 2018 as projects approach completion.

On a constant currency basis, hotel revenue for Millennium and Copthorne came in flat while total Group RevPAR dropped 2.3% led by declines in New York (9.9%) and Singapore (10.1%). We expect Singapore’s hotel portfolio to remain a drag given the anticipated 6.1% increase in hotel room supply in 2017. Most of the supply in 2017 belong to the upscale/luxury sector, which would pose a threat to CDL’s current Singapore hotel portfolio. Despite the general recovery in tourist arrivals in Singapore for 2016, we note that total room revenue growth has lagged, suggesting lower room revenue/tourist and tourists opting for cheaper rooms.

Management expressed optimism in the portfolio global hospitality business for 2017, noting that full year prospects could surprise on the upside on the back of a strong January 2017 global RevPAR performance. London (19.5%), New York (8.9%) and Australasia (12.3) all recorded y-o-y RevPAR growth. Singapore RevPAR though remains a drag with a 5.2% fall. 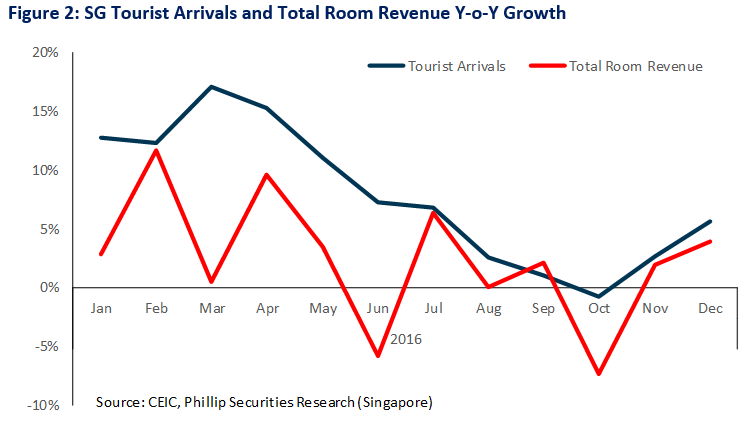 CDL acquired a 24% stake in Distrii, a Co-working space provider for RMB72 million which was completed in January 2017. The company is currently operating in 15 locations across China and with another five more locations in China planned to be opened in 1H17. Distrii has committed to lease around 60,000 square feet of space in Republic Plaza where the space was previously occupied by Bank of Tokyo-Mitsubishi, boosting portfolio occupancy rates by 1.9 ppts from the Group’s current office space occupancy rate of 95.9%. CDL also acquired a 20% stake in Mamahome, an online apartment rental platform, which has a business model that is largely similar to AirBnB. The platform is currently listing 150,000 apartment listings over 20 cities in China. Management shared that the acquisition will be synergistic to the Group’s portfolio of investment properties in Shanghai, Suzhou and Chongqing. 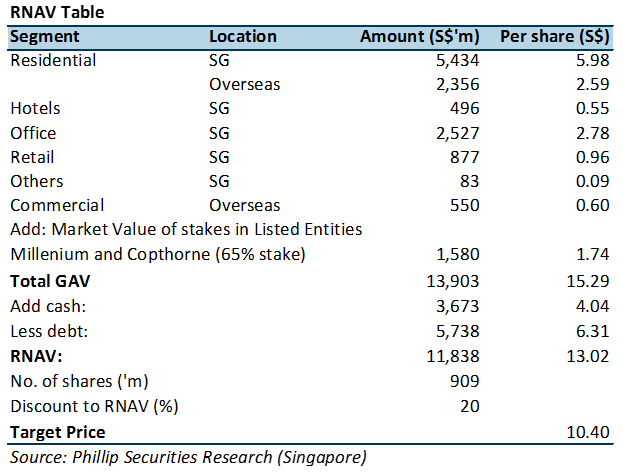