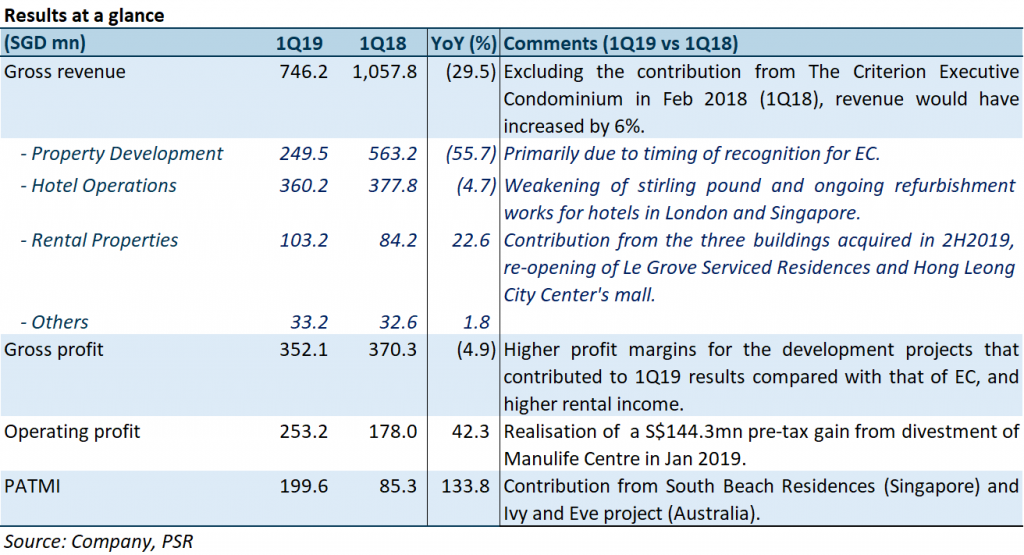 + Recurring income stream shone through. Rental properties was the only segment that reported YoY revenue growth, which was largely due to the three buildings acquired in 2H2018 – Aldgate House, London (Sep 2018), 125 Old Broad Street, London (Oct 2018) and remaining 60% stake in Central Mall Office Tower, Singapore (Dec 2018). This segment was also the frontrunner among all business segments this quarter, on both the PBT and EBITDA levels, mainly due to a $144.3mn realised gain from the divestment of Manulife Centre to Golden Crest Holdings Pte. Ltd. (PPS 2 platform) in Jan 2019.

+ Singapore residential game still going strong. Number of units sold in 1Q19 was c.62% lower YoY, though total sales value was down less-than-proportionate due to the higher ASPs of the projects sold. This included the launch of high-end Boulevard 88 (total 154 units), which contributed c.43% of its total sales value (based on figures available on URA Realis) in 1Q19. The quarter also captured the highest unit price psf of S$4,927psf that was sold to date, for this development.

– Hotel operations segment in the red. While revenue was stable YoY, PBT from this segment recorded a slight dip in 1Q19. This was mainly due to the continued losses recorded at its US hotels (recall the industry-wide challenge on the operating cost structure communicated last quarter) and higher net financing costs. Millennium & Copthorne Hotels plc (M&C) is seeing the refurbishment London and Singapore hotels (namely, the full closure of Millennium Hotel London Mayfair and Dhevanafushi Maldives Luxury Resort in mid-2018) and also in the final stage of discussions with Hilton to potentially designate the newly named Millennium Times Square New York as an affiliate of Hilton, with access to its reservation channels and loyalty programme.

What else was new?

CDL’s proposed acquisition of stake in Sincere Property Group would immediately accelerate its entry into China’s residential segment. While the figures appear to be accretive based on the EPS metric (notwithstanding the accounting reversals), the pro-forma financial effects are currently based on an estimation of the PPA to Sincere’s assets.

The proposed acquisition of a stake in Sincere’s Shanghai Hongqiao Sincere Centre (Phase 2), along with its newly acquired stakes in IREIT Global and its Manager and the freehold build-to-rent project in the UK, is in line with its strategy of ramping up its recurring income segment.

With CDL still largely in the Singapore residential segment, its earnings drivers substantially weigh on the sales efficacy of its five launches this year (figure 3). Boulevard 88 and Amber Park has been boding well so far for the Group and healthy interest is expected for its Piermont Grand (Sumang Walk) EC, being the only EC launch in 2019.

Our RNAV-derived target price represents 1.0x FY19e P/NAV. Valuations are very attractive. CDL has since corrected to 77% of what it stood at immediately before the July 2018 property cooling measures. While there is limited momentum in property sales, we think the market is pricing in a c.40% correction in CDL’s RNAV (figure 4). 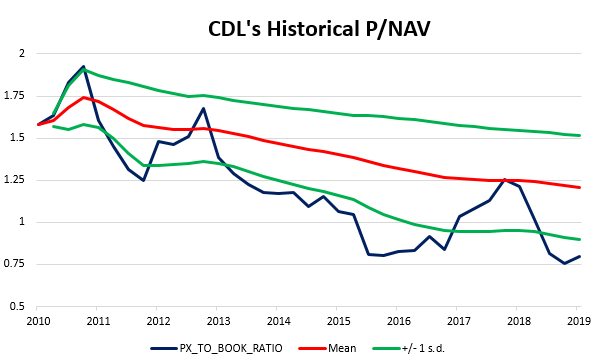 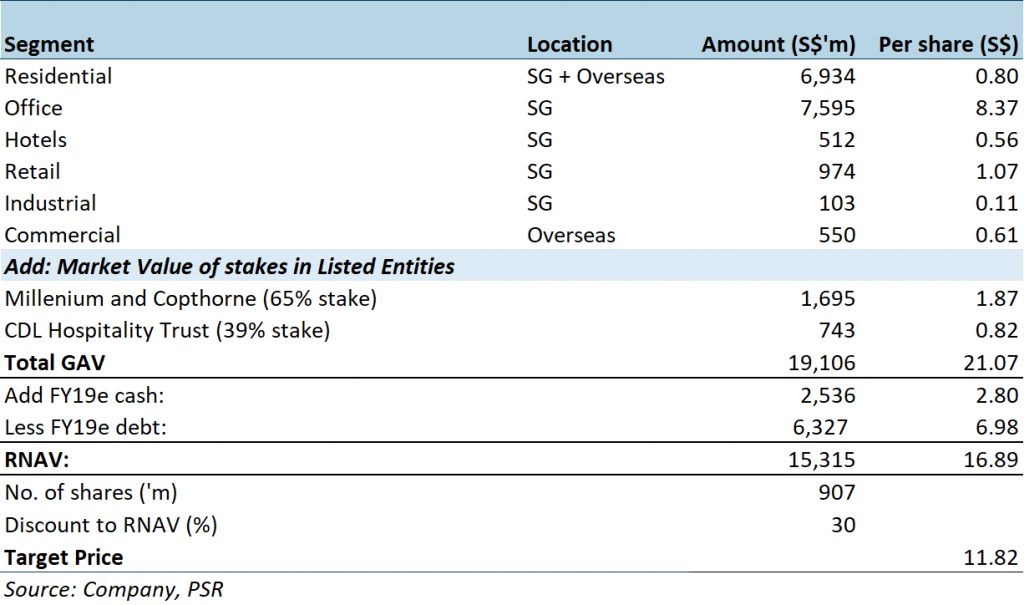