+ Revenue pick-up is driven by momentum in Singapore residential property sales. Revenue recognition from Grandeur Park (estimated GDV S$744mn) commenced in the quarter. Sales momentum has been strong since its March launch. Currently it is 82% sold. Fulcrum, which was 43.8% sold as at end FY16, is now 99.2% sold. Selling prices are in-line with our current model estimates.

+ Cancellation of Melbourne Tower purchase contracts could enable Group to move on with other exit options. Construction progress on this project has stalled since 2013 due to ongoing legal proceedings with the owner of an adjoining property. This owner was concerned about the impact of demolition works on his property. The protracted legal proceedings have led to the Group exercising its contractual right under the outstanding sales contracts to rescind all outstanding contracts with purchasers. The project was originally c.100% sold (579 units) with an estimated GDV of S$358mn. Management is exploring other viable exit options with regard to the property and any materialized profits will be accretive to our RNAV. We note that Melbourne city home prices have increased c.50%1 from 2012-2013 when the Group booked in most of the original sales for the project. In view of the uncertainties surrounding the project, we will not factor in any contributions from Tower Melbourne until we get further clarity.

– Australian residential sales remain slow. Potential launch delayed. As a result of tightened rules for foreign buyers, residential sales in the Group’s Australian projects remain slow. We are not overly concerned as we estimate Willow Apartments’ GDV to be small at S$53mn. Our forecasts are for the project revenue to be fully recognized by end FY18. The Group’s intended launch for another South Melbourne project is also delayed

– Provision of S$4.5mn for foreseeable losses pertaining to a construction project. This is due to higher than expected raw material costs. Nonetheless, management does not expect further significant provisions for its existing construction projects.

We have adjusted our model to incorporate valuation of the Group’s construction business as we believe are nearing the sector cycle bottom. In view of the current upcycle in the property market, we have narrowed the discount to RNAV from the previous 50% to 40% for mid-cap developers under our coverage. CES remains a good proxy to the upcycle in the Singapore residential market with its proven track record in execution and well-stocked land bank, in particular, the Woodleigh site due for launch in 2H18, with an estimated GDV of S$720mn (60% stake). 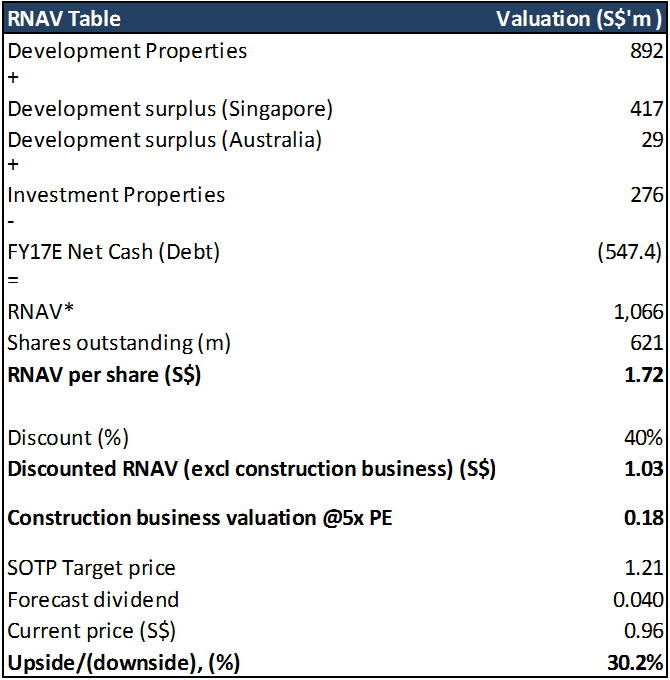 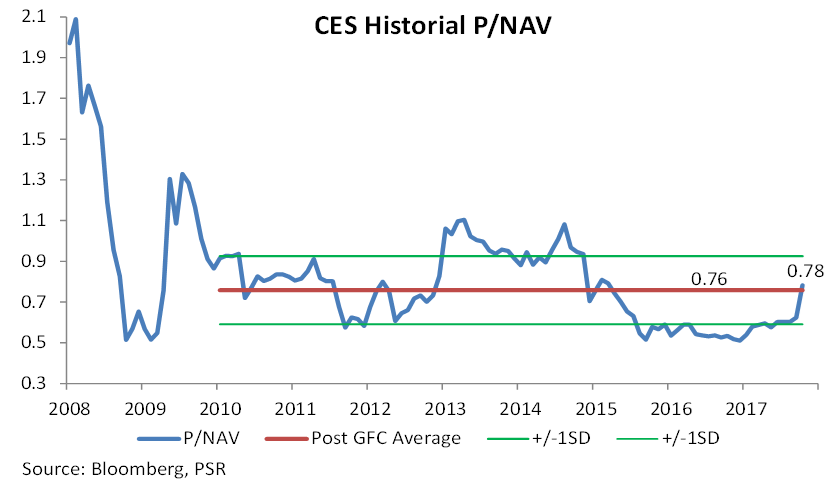