+ Revenue from Hospitality segment grew 4.4% to S$7.1mn which was contributed by Park Hotel Alexandra. This was attributed to higher occupancy rate in the hotel amid improving sentiments in the mid-tier hotel segments (10% growth in RevPAR YTD).

–  The Group has taken a S$5mn provision for a construction project which will lead to a 9.5% decline in our FY17 PATMI estimates to S$40.6mn.

Woodleigh land parcel is expected to launch for sale in 2H18: The Group has jointly acquired a land parcel at Woodleigh Lane for S$700.7mn, translating to S$1,110 psf ppr. The land site with a maximum GFA of 0.63mn square feet is developable into a 16-storey residential block with 800 units. We expect ASPs to range between S$1,750 – $1,800 psf and development margins to be 11% – 13%. The Group is expecting to launch the development for sale in 2H18.

Proposed acquisition of 50% interest in Grade A office building in New Zealand (NZ) to boost recurring income: The Group has proposed the acquisition of a 50% interest in a Grade A mixed development consisting of office and retail space in Auckland, NZ that is valued at S$174mn. The 99-year leasehold property located at 205 Queen Street in Auckland’s CBD has a right of renewal for another 98 years, and was acquired at a cap rate of 6% (in line with CBD offices in NZ). We expect the property to boost annual EPS by 0.4 S’cents from FY18 onwards.

Proposed acquisition of hotel property to boost segment: The Group has proposed the acquisition of an 84-key hotel property with amenities in Perth for A$15mn. The property was acquired at a 6% cap rate. We do not rule out the possibility of cap rate compressions in the future considering that drop in property prices in Perth have begun to slow down since 3Q16.  We are of the view that the Group will continue acquiring hotel assets to grow its hospitality portfolio. This is the third hospitality asset in the Group’s portfolio.

Maintain a “Buy” rating at unchanged TP of S$0.90 based on our FY17 RNAV estimates

We continue to favour CES for its solid execution in the Property Development segment in both Singapore and Australia. With ~90% of units sold in Fulcrum and with six months from the QC deadline, we view that the risk to incur any QC charges from the development has dropped significantly. 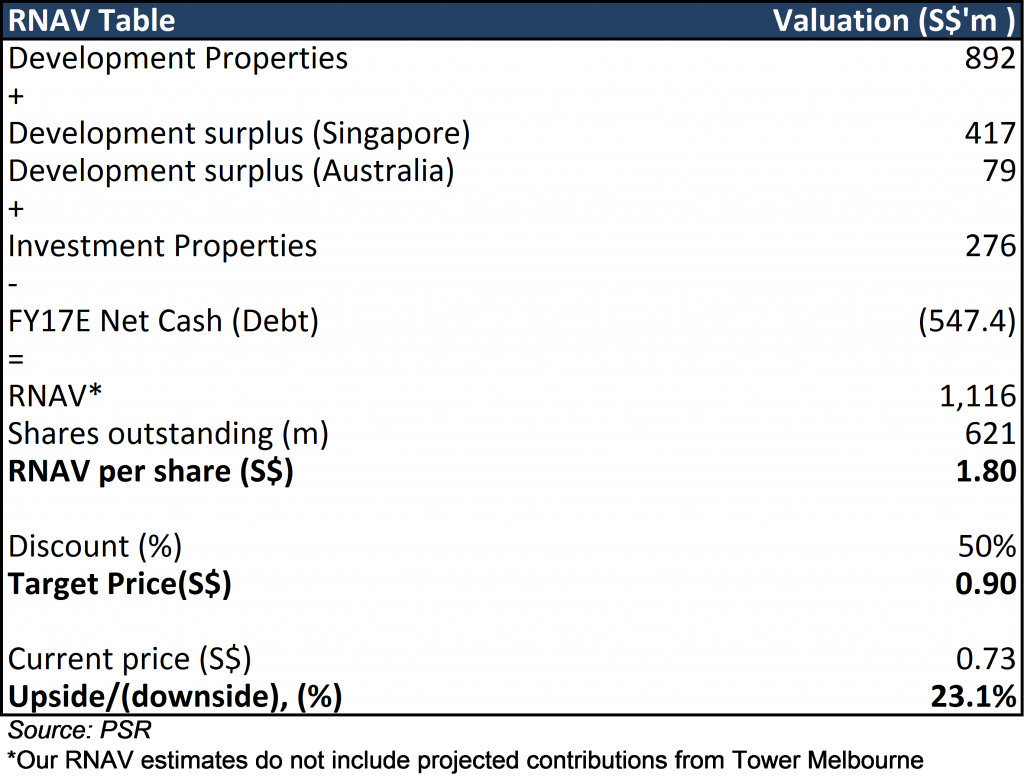