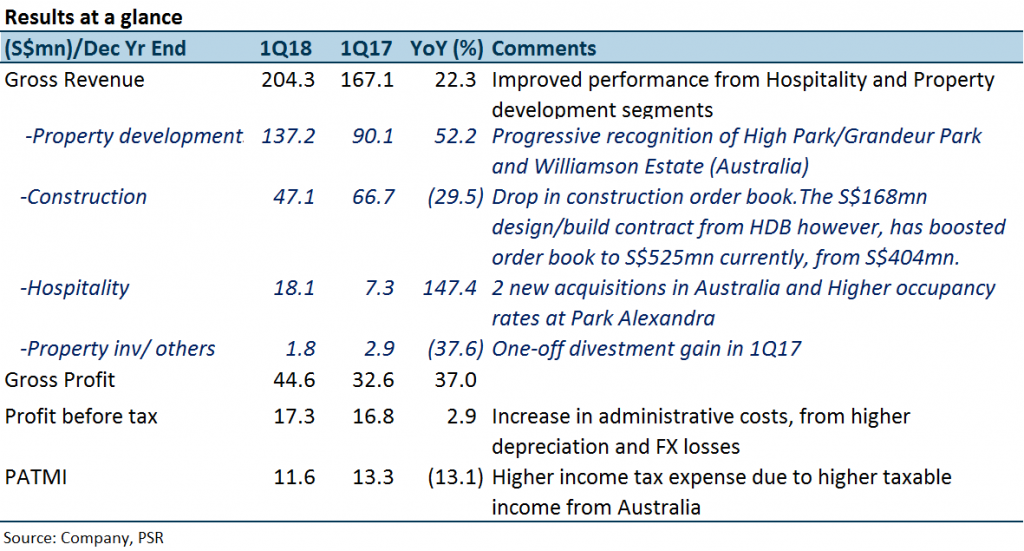 + Continued momentum in residential inventory sales. The Group sold another 84 units in Grandeur Park for the quarter (12% of total 720 units). The project is now 95% sold, after just one year from initial launch in March 2017. This follows the impressive launch of the Group’s previous High Park Residences in July 2015, which was also almost fully sold one year after launch. We estimate remaining unbooked development profits of c.S$235mn from these two projects. Majority of this will be progressively recognized in the next two FYs.

+ Improved occupancy at Park Hotel Alexandra. Stable occupancy rates expected for hospitality assets. On top of new acquisitions, improved occupancy at Park Alexandra Singapore to mid-80% contributed to better earnings from the hospitality division. Corporate demand accounts for more than half of occupancies in this hotel. With room supply tapering and generally improving business sentiment, we expect this segment to remain stable. Management expects general occupancy rates of the Group’s hotels to remain stable.

– Increase in administrative costs outpacing revenue. Admin expenses were up 43% primarily due to higher depreciation and foreign exchange loss.

– Delay in South Melbourne residential project launch again. The launch date for the Group’s 703-unit residential project in Melbourne has been postponed again from the scheduled 2Q18, in view of the soft market conditions. The Group purchased the site in March 2016 for A$52mn, and original launch was for 1H17.

Earnings for FY18/19 will continue to be supported by the progressive recognition of c.$200mn un-booked development profits from High Park (GDV S$650mn) and Grandeur Park (GDV S$744mn). The Woodleigh site is due for launch in 3Q18, with an estimated GDV of S$720mn (60% stake) and share price catalyst could come from healthy take-up rates at the launch.

CES remains a good proxy to the upcycle in the Singapore residential market with its proven track record in execution and well-stocked land bank. Our target price translates to P/NAV ratio of 0.95x.